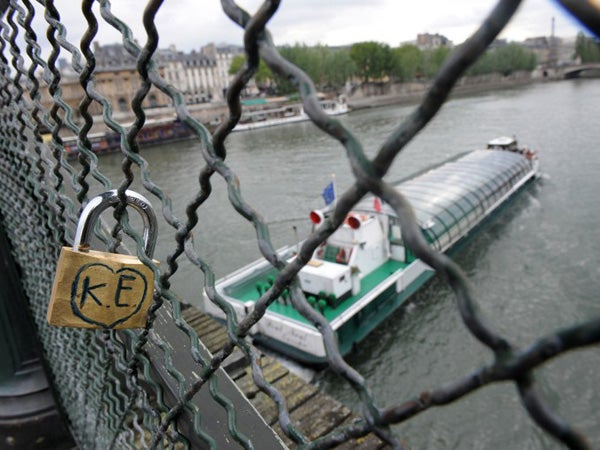 A picture taken on May 12, 2010 on the "Pont des Arts" bridge in Paris shows a "love-lock". More than 1,600 padlocks engraved with hearts and oaths were set up on the gate over the Parisian bridge at the beginning of the month but only fourty were left on May 12, 2010. AFP FILE PHOTO

In Paris, ‘love locks’ conquer all, even City Hall

PARIS – They say you can’t beat City Hall, but Paris authorities who once took a dim view of the thousands of “love locks” adorning the bridges of the Seine river have had a change of heart.

“We are letting the phenomenon be, looking at it with benevolence,” City Hall spokesman Damien Steffan told AFP with a Gallic shrug. “It’s not a problem for us.”

The custom of attaching padlocks to bridge railings, fences or other public fixtures as a way for couples to pledge their undying love is of uncertain origin, but many link it to a 2006 novel, “Ho Voglia di Te” (I Want You), by Italian author Federico Moccia.

In it, two lovers attach a padlock engraved with their names to a lamppost on the Ponte Milvio in northern Rome, then throw the key into the River Tiber.

What could be more romantic than attaching a love lock to the Pont des Arts, the footbridge that crosses the Seine from the Left Bank to the Louvre?

Or to the Pont de l’Archeveche, in the shadow of Notre Dame Cathedral?

Most couples throw away the key, but some hang on to them as keepsakes for their children.

When the custom began taking off around four years ago, Paris city authorities were not having it, more concerned with “preserving heritage” than gratifying lovers.

They considered a variety of solutions, such as installing purpose-built iron trees on or near the bridges.

Two years ago, around 10 days after a City Hall spokesman said “the locks would be removed, eventually”, hundreds of them mysteriously disappeared from the Pont des Arts, with only a few dozen left hanging.

Municipal authorities were quick to deny involvement. “City workers had nothing to do with this,” a spokesman said, suggesting that someone else had pre-empted them.

Police were just as categorical, saying they had heard nothing, seen nothing and detained no one sneaking about with a wire cutter in hand.

Since then, however, the love locks have been allowed to multiply again, appearing on any bridge where an attachment is possible.

“People like it and they tell other people about it,” Steffan told AFP, adding: “They give Paris some publicity.”

Seen from a distance the Pont des Arts today glints like gold, its sides covered in brass dotted here and there with wisps of white where brides have tied on strips from their wedding veils.

Tourists snap pictures of the jumbles of padlocks – even chunky bicycle locks in places – or jostle for a place to attach their own.

The locks are absent from bridges with glass or stone railings, but at the Seine’s oldest bridge, the all-stone Pont Neuf, tourists make do by locking their love onto the railing of the steps down to the quay.

The love lock trend has spread to cities around the world from Moscow to Marrakesh.

In Florence however, the locks are barred from the Ponte Vecchio – the city’s oldest, known for the dozens of shops lining the span in three storeys – for fear of damage to the metal railings.

In Paris, an American tourist, Suzan Field from the western US state of Nevada, said she and her husband attached a love lock at the Pont de l’Archeveche two years ago and planned to check on it every two years.

A Parisian woman named Elisabeth confided that she was attaching a second love lock after changing partners.