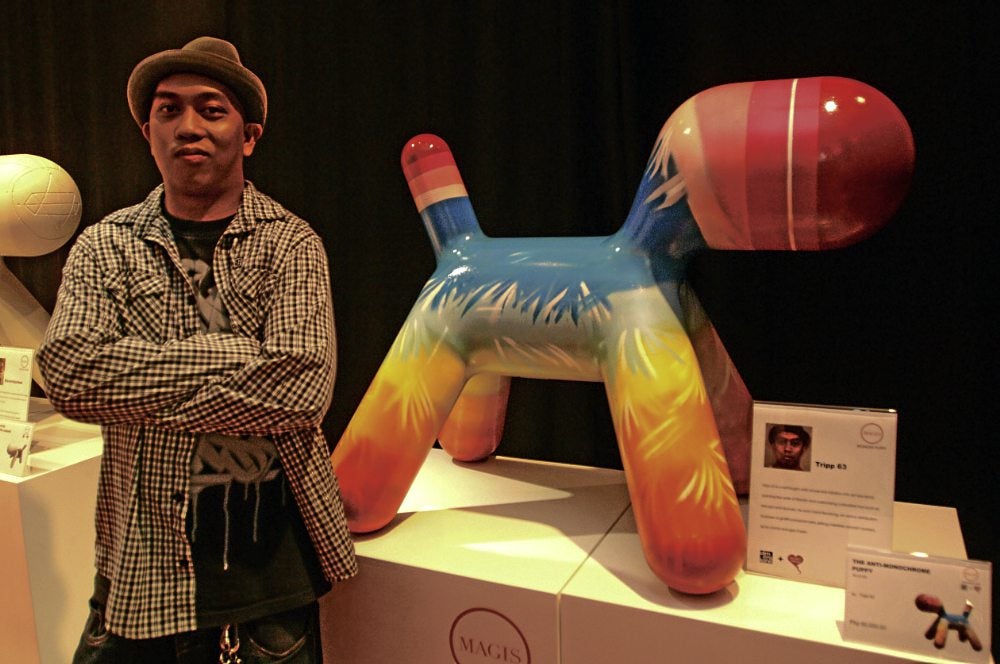 THE cities of Chicago, Seattle and Singapore have done it before: tapping different artists to jazz up animal figures such as cows, pigs and even lions. Even Guyito, this paper’s mascot, has been reinterpreted by various Filipino artists.

But it never fails every time, especially when your canvas is as cute and as iconic as this one.

Their works, curated by Secret Garden gallery, are now on display at Dimensione’s flagship store at Bonifacio High Street.

In case a puppy catches your fancy, you can take him (or her) home, as all eight one-of-a-kind artworks are for sale.

Should your favorite be taken, you can still enjoy viewing it up close. All eight are on display on the store’s second level.

It wasn’t only a case of embellishment for embellishment’s sake, as each artist drew from his or her strengths and personal experiences, and worked with media he or she was familiar with.

Some even went out of their way to experiment by exploring unfamiliar techniques and materials to advance their art.

Sonny Sunga and Arnold Austria of Jagnus Design totally did away with the original, store-provided plastic puppy and made their own using gemelina wood.

“But in keeping with the Wonder Puppy’s iconic appearance, we were faithful to its shape, size and dimensions,” said Sunga. “We’re the only non-artists in the group, so we opted not to use color.”

Even without a light coat of varnish, the piece easily stood out from the rest of the colorful and flamboyant creations.

It was more of a three-dimensional interpretation of the puppy, complete with a series of ridges from head to tail, which was part sculpture, part sci-fi, as it looked uncannily like the dog that walked through a futuristic X-ray machine in the original “Total Recall.”

Folk art was the favorite source of ideas for most of the artists, particularly Manila boy Wesley Valenzuela, who derived inspiration from the colorful jeepney of his youth, complete with carved signboards such as Quiapo and Sta. Cruz.

“I was born and raised in Manila’s Sta. Cruz district,” said Valenzuela. “These were places I frequented, as I learned about life and art in the city’s streets while taking up Fine Arts at UST.”

As a tribute to the jeepney’s ubiquitous miniature winged horses crowning its hood, Valenzuela incorporated what seemed like a small pair of wings, saddle and harness into his piece.

The horses and other traditional buntings once associated with the jeepney are fast disappearing, as both manufacturers and drivers scrimp on needless but iconic décor, as they try to survive and adapt to the hard times.

Except for the colorful and carved detail, Valenzuela retained the puppy’s original white, all the more highlighting the carved and painted add-on which looks both bold and garish like a real jeepney.

Not a few went whimsical. Mimi Tecson, drawing inspiration from her work with children’s art, studded her Wonder Puppy with hundreds of miniature plastic toy soldiers. To keep her masterpiece from looking flat, she used multicolor figures stuck randomly all over her canvas.

From afar, Tecson’s masterpiece looked like it was covered in Technicolor fur, an upright stuffed toy, if you will, that never failed to draw viewers’ attention.

Graffiti artist Whoop (Ramos) went a bit philosophical as he drew inspirations from his real-life pets, living and dead, in a pastel confection primarily in lime-green with “tattoos” of his various best friends through the years superimposed in candy shades.

“As part of the family, dogs leave behind plenty of fond memories to their owners,” he said. “And these beautiful memories are etched in our minds forever.”

Magis, an Italian furniture brand, is famous for its modern and sculptural furniture and accent pieces made mostly of plastic. Wonder Puppy is just one of Magis’ items exclusively featured in Dimensione.

Like most progressive furniture brands, it doesn’t rely solely on its in-house designers, but constantly collaborates with leading international furniture and industrial designers such as Phillippe Starck.

Designed by Finish Eero Aarnio, Wonder Puppy is sturdy enough to double as an accent piece and, provided it isn’t embellished, also a stool.

Like a real dog, it comes in small, medium and large sizes.

Over the years, the piece has enjoyed a cult following among businessmen, celebrities and artists who love a good design as much as they probably do real four-legged dogs.