What went on behind the Volcanoes shoot? | Inquirer Lifestyle ❮ ❯ 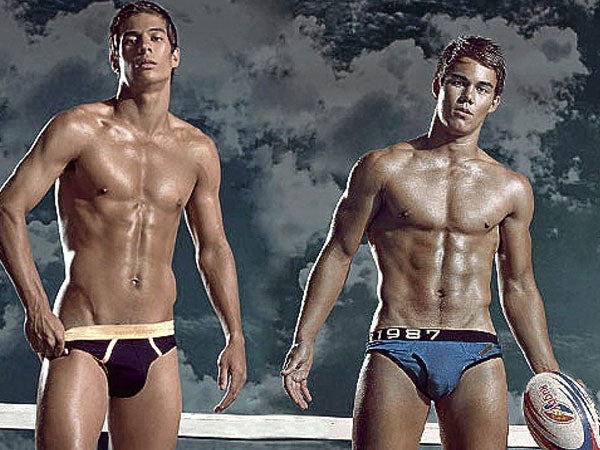 What went on behind the Volcanoes shoot?

Who knew what rugby football was? Who knew it was even played in this town? More important, who knew there was a Philippine national rugby union team?

It seems ironic that an overblown billboard drama would be instrumental in bringing the Philippine Volcanoes and their sport to Filipinos’ consciousness. By now, the country must know its national rugby union team has been around—and winning in international matches at that—since 2006. On top of that, they’re volcano-lava hot, as our beki friends might say.

The massive, four-panel Bench billboards on Edsa-Guadalupe, Makati, which featured several members of the team in their Bench Body skivvies have been removed, with Bench complying to two city mayors’ “suggestion” to take them down. The images of male athletes in their underwear seem to have been too much for the two mayors’ sensibilities and moral standards. But if anything, it whetted their newfound fans’ appetite to know and see more of these hard bodies.

The Volcanoes have become celebrities overnight.

When we first heard of the team’s existence several months ago, the first thing we asked was: Do they have teeth? In our mind, rugby was one of those sports where, in the rough and tumble, athletes lose their teeth. (Subtext: They must be ugly.)

They’re actually very good-looking, we were told; in fact, better-looking than most of the Azkals, the national football team that was already enjoying an unprecedented popularity, both for their skills on the field and their good looks, in this basketball-crazy town.

We had forgotten about that conversation until we heard of the Bench billboards on the news and social networking sites (we rarely pass through Edsa). Since then, we’ve learned the team members are mostly half-Filipinos living abroad in the Commonwealth countries (rugby is an English sport). Some are students, most of them are professionals—there’s a lawyer, a stockbroker, an entrepreneur. One of them is an heir of the Ayala-Zobel’s, Jaime Urquijo Zobel, 20, son of Bea Zobel Jr. (No, the young man didn’t pose for the billboards.)

Last year, the team caught the eye of retail whiz Ben Chan and signed them up with Bench. The Volcanoes aimed to promote the sport here.

When the team shot its first campaign, “They filled the room!” says Jojo Liamzon, Bench’s ad-prom manager. He means it both literally and figuratively “The studio was big, but they’re gigantic. They’re a presence!” International photographer Lope Navo shot the soon-to-become controversial campaign. Noel Manapat styled the shoot.

“They were very open” to the idea of stripping down for the photos, Liamzon says. Only half of the 24-member team posed for the Bench Body shoot, though they were signed up as a team. “You must remember that these are not locals who are typically conservative. They’re used to being seen in public [in skimpy swim trunks]. I imagine they’re surprised over the racket that ensued.”

The billboard images have been replaced by a statement urging Filipinos to “Throw your support behind the Philippine Volcanoes.” If the protests raised on social networks over the billboards’ removal are anything to go by, it’s safe to assume the rugby stands won’t be empty for much long.