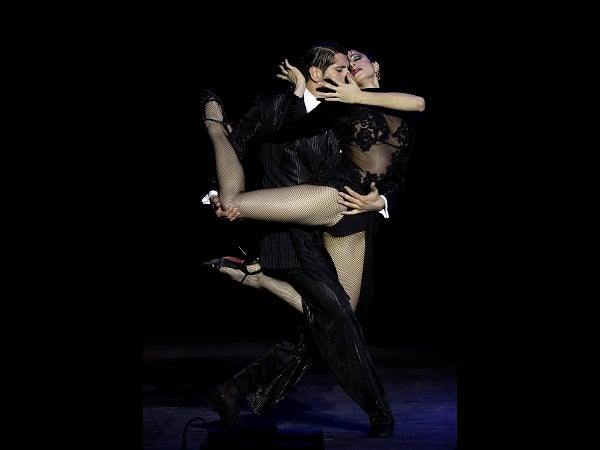 Argentina's Cristian David Correa, left, and Sabrina Amuchastegui compete during the 2012 Tango Dance World Cup stage finals in Buenos Aires, Argentina, Tuesday, Aug. 28, 2012. Couples from around the world competed in the finals Argentina's annual tango competition, the highlight of a two-week festival which this year honored Astor Piazzolla, the legendary composer and bandoneonista who revived the genre and infuriated purists by blending tango with rock music in the 1970s. AP/Natacha Pisarenko

BUENOS AIRES–Argentine couples recovered their dominance of the world’s top tango dancing competition, sweeping both the Salon Tango and Stage Tango categories as the annual festival drew to a close.

Cristian Sosa and Maria Sciuto won Tuesday night’s stage final with a score of 8.42, followed by four other Argentine couples at the top of an international field. Five Argentine couples also came out on top in the Salon competition the night before, besting a total of 487 couples from 32 countries.

Couples from Japan and Russia, Colombia and the United States have frequently wowed the judges in previous finals, but this year none managed to impress the panel as much as the hometown couples who danced before thousands of fans in the Luna Park stadium in the Argentine capital.

To the rhythm of “El Gordo Triste” (The Sad Fat Man), the champions swirled across the floor, smoothly nailing the genre’s classic forms — untranslatable moves such as the “boleos,” ”ganchos” and the passionate embrace known as the “abrazo milonguero.”

As with the winners of Monday night’s Salon Tango final, Sosa and Sciuta left the stage with $8,600 dollars and two tickets to Paris to perform there.

The much anticipated final was dedicated to two of the best-known ambassadors of the genre: bandoneonista and composor Astor Piazzolla, who died 20 years earlier, and dancer Maria Nieves.

Drummer Daniel “Pipi” Piazzolla, Astor’s grandson, interpreted along with several other young musicians two songs first performed by the Electronic Octet, a fusion of tango and rock led by the elder Piazzolla in the 1970s, and Nieves shared a dance with the champions of nine previous world tango competitions.