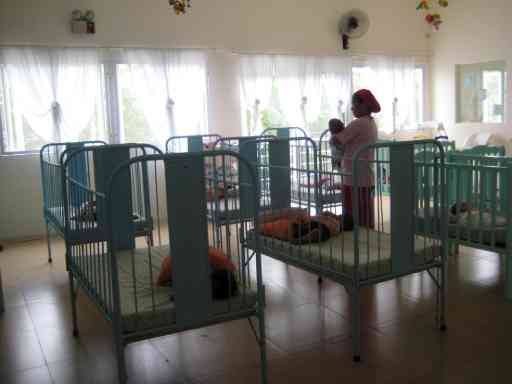 Where Mothering is Optional

“You have brought shame to this family.”

“There are no maternity benefits for you and you have to resign from your job.”

What painful words for a woman who is pregnant, unwed and with no one to turn to. Amidst the confusion and turmoil, her heart cries out: “I want my baby to live, but where shall I go?”

The Heart of Mary Villa (HMV) is a ready answer. Run by the Religious of the Good Shepherd (RGS), HMV is a place for pregnant women who have been cast away, abused, despised or made to feel worthless. Women who just need time, space and stillness to weigh their options and plan out their future. Women who will be bringing forth precious lives into this world but who, because of the difficult and complicated circumstances they are in, need special care, comfort and assurance that there is a meaningful life ahead of them and their offspring.

Sr. Mary Lorenza Sangalang RGS, HMV directress, describes what HMV can offer the women (and girls) who come to stay during their pregnancy and after: “We give counseling and offer therapy when indicated. This facilitates the healing of wounds sometimes sustained from childhood. This also ensures that the mother has pursued, mentally and emotionally, the options of keeping or giving up her baby for adoption.”

As varied as the women themselves are the circumstances surrounding their pregnancy, which may be a result of extra-marital relationships, spur-of-the-moment sexual intimacy, and rape, incest, paid sex, and so on. The pregnancy is thus unexpected, unplanned and, in the beginning, most likely unwanted.

A recent phenomenon is unplanned pregnancies that are a result of relationships that developed through the mobile phone and the Internet.

“Now we have young women who meet their so-called boyfriends via texting,” reveals Sr. Lorenza. After what seems like a courtship, “eyeballing,” or meeting personally, follows. The pair might end up in a motel, says HMV social worker Leni Paduyas. Theirs could be a one-day affair or a series of intimate meetings.

Adds social worker Grace Villapando, “Some have ended up being brought to an abandoned place. For some it’s their first and only sexual experience.”

After the torrid episode, the man is never heard from again. The poor victim may not even find out if the man was using his real name.

The Good Shepherd Sisters, who run a separate center for Overseas Filipino workers (OFWs), also offer HMV’s services to OFWs who get pregnant abroad because of either forcible or consensual sex. In Metro Manila, many pregnant women in distress seek help from the parish office of the Quiapo, Baclaran and Sta. Cruz churches. Parish social services then refer them to HMV.

Says Paduyas, “One was referred by a candle seller to the Department of Social Welfare and Development (DSWD), which then referred the woman to HMV.”

Not a few have attempted abortion by taking strange concoctions or inserting tablets and other fabled abortifacients into their private parts. That is another story in itself.

“We rejoice when someone comes,” Sr. Lorenza exclaims. This means a child is given a chance to live. The RGS sisters however add that HMV does not take in psychiatric patients and those with heart ailments.

The Good Shepherd Sisters began ministering to single expectant mothers in 1953 in what was then called Charter House, just across the Good Shepherd convent on Aurora Boulevard in Quezon City. More than 100 women were served until the ministry was transferred to Maysilo in Malabon in 1957, through the generosity of the Archdiocese of Manila. The place was named Heart of Mary Villa in honor of Jesus’ mother and her compassionate heart.

During a span of more than 50 years, over 6,000 women found a home in HMV, not counting those who came for counseling, therapy or consultation. Just as many babies began their lives there. Families, too, experienced healing in that special place.

Malabon being a flood-prone area, HMV was not spared the frequent inundation in recent years. In 2009 when most parts of Metro Manila went underwater because of typhoon Ondoy, HMV was barely afloat. It was time to seek higher ground.

HMV recently transferred to the sprawling Good Shepherd compound in Quezon City where a new building that serves as nursery was inaugurated last February. Without a regular source of funds, HMV thrives on God’s providence. With about 25 expectant mothers and dozens of babies to care for at any one time, HMV needs all the help it can get.

The Good Shepherd Sisters have many other ministries to sustain. Founded in France in 1835 by Saint Mary Euphrasia Pelletier, the Good Shepherd nuns came to the Philippines in 1912. They are among the largest women’s congregation in the world. Their mission is “directed to the most neglected and marginalized, in whom the image of God is most obscure.”

Mothers and their babies are HMV’s primary concern. In a letter, a former resident sums up the essence of HMV. “The day I first came to you, I thought I was alone and everybody was against me. I found myself sheltered from the storm. I found real peace of soul. Problems poured out to you became stepping stones to a realization and a thirst for truth. It was there that I found it.”

While in HMV, residents are provided caring, teaching and healing services. They are helped to weigh their options: to bring home their babies or give them up for adoption. Because the decision is not an easy one, the women are given time after delivery while they nurse their newborn.

Mothers who at the outset say they do not ever want to hold their babies have no choice but to breastfeed them for at least a month. Fear of getting attached to a baby one intends to give up is no reason not to nurse, according to HMV sources. After one to two weeks, the babies for adoption are moved to the nursery.

Of the 5,108 mothers who came to HMV in the past 50 years, 64 percent brought home their babies while 36 percent gave them up for adoption. (See statistics in the sidebar.)

Naturally, most mothers go through the “empty arms” experience, Sr. Lorenza says. A mother’s decision to give up her baby is not irrevocable. She is given time to think it over and change her mind even after she has turned over her baby. It is a long post-partum process. Grief therapy is part of the healing process.

Turning over a baby is always an emotional moment for a mother. A solemn private ritual is held, with the nuns, counselors and caregivers prayerfully gathered around the mother and her baby. Tears flow.

Recalls a mother: “I held my son tight, observing every feature of his little face, and taking in his baby scent. And then I put him in the arms of the Sister.”

Many former HMV residents still ache when they remember words from a song they had learned: “I prayed God would strengthen me to do what I must do. I made a choice that I believed would be the best for you… A kind of pure unselfish love helped me let you go.”

HMV used to be among the government-accredited adopting agencies, but now it concentrates mainly on the care of mothers and babies for adoption. Still, HMV social workers regularly participate in the matching process that precedes formal adoption. HMV functions as a child-caring agency while DSWD and several accredited NGOs (e.g., Norfil, Kaisahang Buhay Foundation) serve as child-placement agencies.

Unlike in the past when the adoption process was shrouded in secrecy and records were tightly kept under lock and key, a policy of openness now helps adoptees as well as adoptive and biological parents find answers to their questions.

“Search and reunion” efforts are part of HMVs services. HMV is currently handling some 200 searches initiated by both offspring and biological parents. Information seeking is a prelude to reunion. One has to consent to be found for the seeking party to be allowed to re-connect. HMV has been witness to a good number of reunions and unexpected surprises.

Says a 38-year-old woman who spent her infancy in HMV: “There are questions in my heart. I would like my biological mom to feel happy about where I am now, not to be sad that she gave me away when I was two weeks old because she has done a good thing for my future. I would like her to meet my adoptive mommy who has done good things in my life.”

There are parents, too, in search of their offspring. A father muses: “After much thought I decided to look for my son. I need to tell him that he was not unwanted, that his mother gave him up to give him a better future. I also need to ask for forgiveness.”

Oh, the questions the grown-up adoptees ask and the stories the biological parents tell! Volumes could be written about the lives that have passed through the portals of Heart of Mary Villa where, in the words of St. Mary Euphrasia, ministering to the broken means “having a great and merciful heart, a healing touch that raises and restores to wholeness and gives the courage to start again.”

Sr. Lorenza could only enthuse: “HMV is privileged to journey with beautiful people in their ongoing life and love story. Each encounter is an experience of God’s gratuitous love.” •