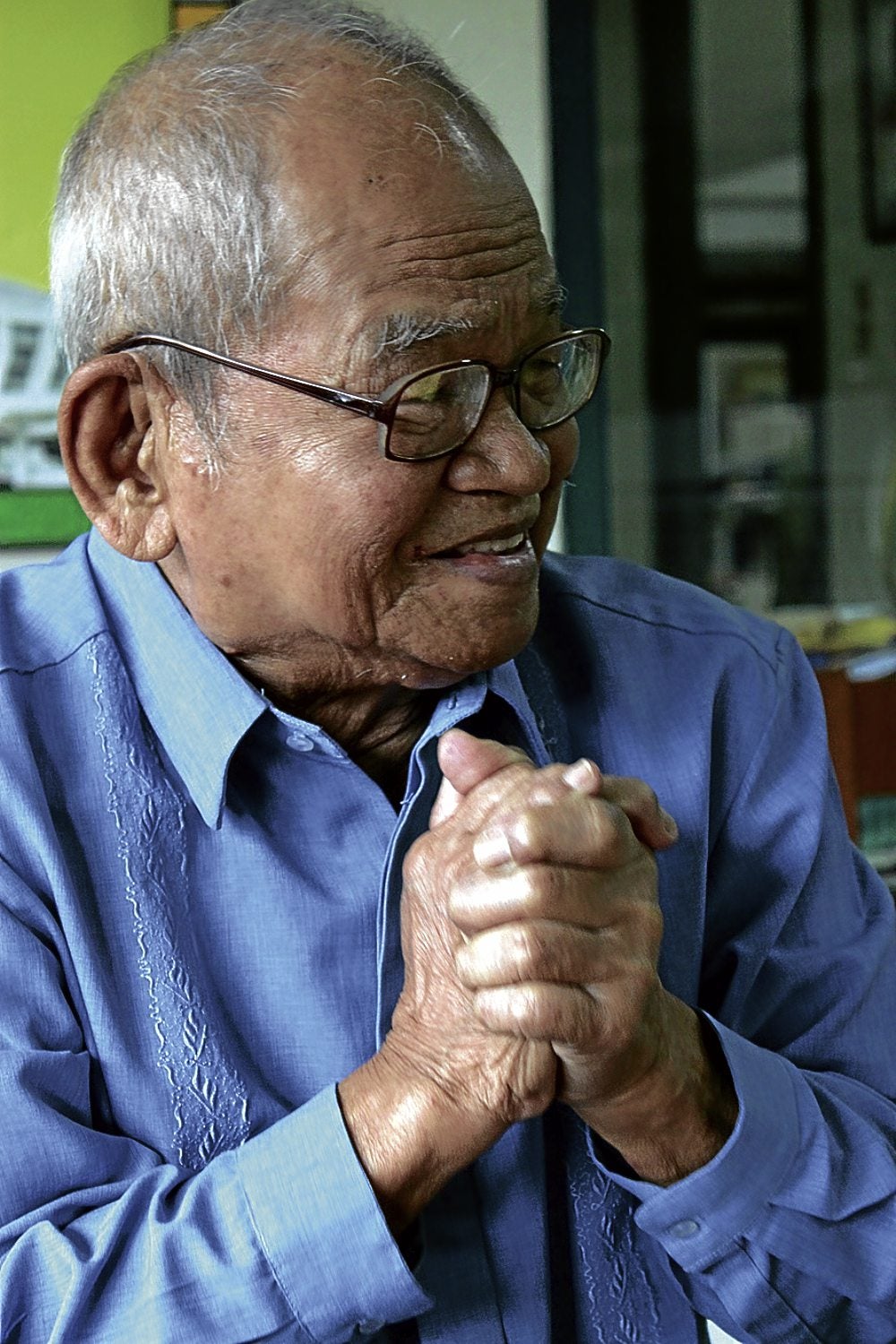 Nicasio Aranas, or “Tatay Nic” as he is fondly called, is an 86-year-old World War II Filipino survivor. A native of Bauan, Batangas City, he survived the war risking his life as a runner in a guerrilla movement in his hometown and working in the Japanese-controlled airfields in Manila. His stories on surviving nearly three years of atrocities during the occupation and witnessing the fierce fighting in the Battle of Manila, which liberated the Philippines from the Japanese, continue to be a source of wonder to his family and friends.

Now with 18 grandchildren and 13 great-grandchildren from eight beautiful kids with a wife he met during the war, Tatay Nic lives to tell of his personal victories.

He is also  known today as Asia’s  oldest high school graduate—he graduated only recently. He continues to attribute his long life to his love of learning.

Tatay Nic was not nearly 15 on Dec. 8, 1941, the day after the Japanese attacked Pearl Harbor, which signaled the entry of the US in the war. The day seemed like just another school day in his hometown. He walked barefoot to school, about a mile away from home.  Just as he got there, he realized something was wrong.

That day marked the start of the Japanese invasion of the Philippines.

Tatay Nic’s schooling had to wait, as personal survival became the most pressing need.

“You had to leave the place,” recounts Tatay Nic. “You have to consume all you have, you have to be evacuated.”

Then came the aerial dogfights. At first, Tatay Nic found the aerial battles between the Japanese and the Americans amusing. The little boy that he was, he climbed trees to witness the terrific air fights over Batangas Bay. “Yung dogfight,” he recalls, “parang sa sine. I’m shouting pero takot ka na kasi nagpapatayan sila.”

Soon after the bombings, life for Tatay Nic and everyone else became unbearable. They all had to run for shelter each time they heard the siren, but for Tatay Nic, it was a little more difficult: “Sa amin walang bundok, sa mga liblib lang ng pook. We would go into foxholes or underground shelters. You would see people were all scared.”

Then the killings came. Tatay Nic recalls with great horror townsfolk—women and children included—being rounded up by a river, each of them slashed, stabbed and killed with bayonets, their blood gushing into the river, making the village’s water supply undrinkable.

Tatay Nic recounts a time the Japanese soldiers rounded up villagers inside the Bauan Catholic Church and burned them alive inside.

For those who survived, fear for their safety was soon compounded by fear of starvation.  The food shortage took a turn for the worse soon after the Americans surrendered to the Japanese on May 8, 1942.

Life under the Japanese Occupation for nearly three years was a time of great uncertainty, says Tatay Nic. There was no future to live for. He only thought about how to survive the present. “You cannot work and save dahil baka ’di ka na magkaroon ng bukas.  What you get, you eat. Pasalamat ka sa Diyos buhay ka.”

It didn’t take long before Tatay Nic did something to protect whatever was left of his hometown’s food supplies. He joined a local guerrilla movement, led by Colonel Flores in the Pandeta area, in the need to protect the town and nearby communities.

As he was not yet 16 then, Tatay Nic worked as a runner delivering secret messages.

Tatay Nic risked his life serving local guerrillas, which history claims to have caused a drain on Japanese military resources, including food.

The war didn’t keep Tatay Nic from his favorite pastime: reading. “Palabasa ako,” he fondly remembers. He read any scrap of newsprint he could lay his hands on.

He soon decided to move to Manila and find work. Armed with a few Nippongo pleasantries he picked up along the way (i.e. Konnichiwa!  Arigato!), he landed a job in Manila’s wartime airfields in Rosario and Grace Park.

As food supplies dwindled further, Tatay Nic—who describes himself as a “Jack of All Trades”—ventured outside the airfields and found business along the mouth of the Pasig River, where he delivered niyog from Laguna to the city’s wet markets. He recalls, “Pasig River was very clean you could drink the water, very clean, you see, ’yung ilalim kita mo.”

The future of the occupying Japanese forces, though, was becoming less clear by the day.  By December 1944, the American campaign to recapture the Philippines from the Japanese went in full swing: The American forces landed in Mindoro, south of Luzon. “When the liberators came,” recalls Tatay Nic, “when the Americans came, I was very happy.”

Soon, the fiercest fighting between the Americans and Japanese came to the city, as the Battle of Manila began in February 1945. Because of that, he decided to leave Manila by walking all the way to Batangas for a week.

The treacherous journey had him crossing Mount Cristobal, only to be caught on the other side by the Japanese in Candelaria, Quezon, where he, with 14 other Filipinos, was herded to the garrison in town and forced into a dugout. Just as the Japanese were about to kill them, the sirens sounded. Tatay Nic took advantage of the chaos and escaped. He survived; the others weren’t so lucky.

The Americans dropped nuclear bombs on Hiroshima and Nagasaki on Aug. 6 and 9, respectively, leading to the surrender of Japan to the Allied forces.

“I was terribly very happy when the war ended,” Tatay Nic declares. “I hate war. It’s no good.”

Apart from surviving the war, there was one other good thing he came away with: he met his future wife Crescencia Agbay while he worked at the headquarters of the 1694th Engineer Combat Battalion. Agbay helped gather laundry in the camp, while Tatay Nic served as  personal orderly of Maj. C.E. William R. Battley.

Battley, in his letter dated Oct. 19, 1945, described Tatay Nic as an “extremely intelligent lad, although he has only six years of school, has a keen mind and a mature outlook.”

Just after Battley and his battalion left, Tatay Nic found work next at the American Officers Club in Intramuros, Manila. His zeal for honing his English-speaking skills easily won him new friends among the US forces.

Formerly library aide at the Adult Night High School of La Salle Green Hills, he makes himself readily available as a resource person to students wanting to learn more about what they don’t come across in the library’s history books on World War II.

“Peace is not only no war,” reminds Tatay Nic, “but that you have a peace of mind.”

The peace of mind Tatay Nic enjoys today comes from the fact that he had been able to go back to school and finish his studies—54 years after the war started. He enrolled at La Salle when he was 68; he got his high school diploma at 72.

Ten years on, he continues to tell people how his love of learning helped him survive the war and how it continues to let him live happily in a time of peace.