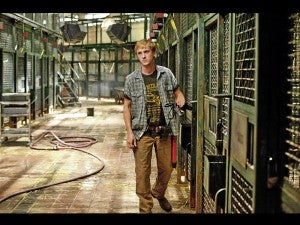 Will Rodman (James Franco) is a scientist working within a large pharmaceutical corporation conducting genetic research to develop a benign virus that restores damaged human brain tissue.  He is committed to finding a cure for Alzheimer’s, a disease that afflicts his father, Charles (John Lithgow).

Will’s relentless focus has precluded personal relationships, but the connection between his research and Charles’ illness brings the two together, albeit under difficult heart-rending circumstances.  Just prior to the drug company’s commencement of human trials of a promising and potentially lucrative new drug, Will’s simian test subjects suddenly display bizarrely aggressive behavior.  Management deems the research a failure, and Will must shut down his program.

Amidst the confusion of the study’s sudden termination, Will finds himself charged with an overlooked newborn infant chimpanzee—a male, the newly orphaned offspring of his most promising test subject.  That young chimp, destined for greatness, is named Caesar, played by capture-performance actor Andy Serkis, marking his greatest art-rending performance ever in CGI.

Will secretly raises young Caesar as his own, at home, while caring for his ailing father.  “Will must now be a caretaker, not only to Charles, but to this baby chimp,” says Franco.  “As the story progresses Will becomes more of a person and less of a scientist, and starts to care about Caesar more than the success of the drug.”

Over time, with the help of the drug, the chimp exhibits incredible cognitive skills and intellect.  At the same time, Charles’ symptoms of Alzheimer’s miraculously go into remission.  Will’s bending the rules of laboratory trials seems to have worked beyond his hopes.

However, as Caesar matures, his highly-developed intelligence is countered by the aggressive and dangerous protective instincts typical of adult male apes.  Caesar soon becomes too much for Will. Though reluctant to part with Caesar, who has become like a son, Will takes Caesar to live among other apes within the confines of the San Bruno Primate Sanctuary.

But unknown to Will, the “sanctuary” is more like a shoddily run prison—a dumping ground for unwanted or abandoned apes.  It is run by Landon (Brian Cox, who starred in director Rupert Wyatt’s debut feature, the acclaimed “The Escapist”), and Landon’s son, Dodge, portrayed by Tom Felton.

In addition to presenting emotionally-engaging photo-realistic apes, the film’s setting is instantly recognizable and relatable.  The movie is an origin story in the truest sense of the term.  Set in present day San Francisco, the film is a reality-based cautionary tale, a science fiction/science fact blend, where man’s experiments with genetic engineering lead to the development of intelligence in apes and the onset of a war for supremacy.

The powerful and emotional battle that streamed out of the sanctuary’s abuses became a platform for the film’s most climactic scenes. Rupert Wyatt shares:   “We wanted it be a ‘world-stops-spinning’ moment that plays into the whole idea of evolution and where that can take a species.” That defining instant leads to a daring escape, an epic confrontation at San Francisco’s Golden Gate Bridge, a wrenching and fateful reunion between Will and Caesar—and a revolution that will forever change the planet.

In a recent chat with Total Film, Felton revealed he’s keen to further expand his range, to join Serkis in CGI circles.  “I bored Andy for hours about how he got into it and how he came to be the godfather of it all,” said Felton “He talked me through a lot of it, and it’s something I’d like to look into. There’s so many scripts that you could have read 20 years ago and you’d have said, ‘You can’t physically make that’—but now it’s an option, you can do things that weren’t really achievable.

“Rise of the Planet of the Apes” opens August 4 in theaters from 20th Century Fox to be distributed by Warner Bros.