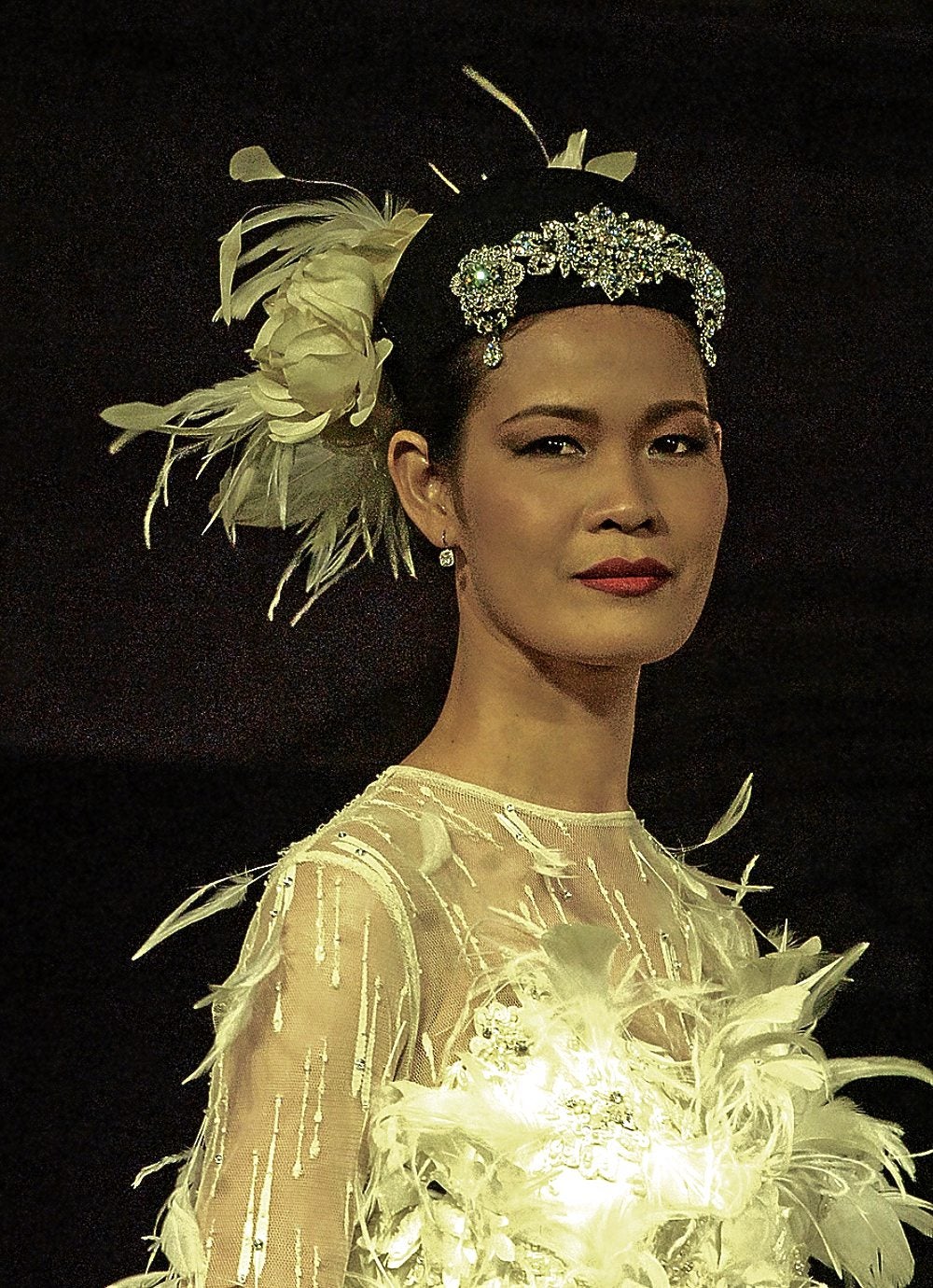 It’s the season for cat-eyes!

Eyes were smokier and surely more dramatic than what a real bride might wear on her wedding. Most of the 38 fashion designers chose to play up their model’s peepers with darker eye makeup.

“Make her look like a rich Chinese” was Auggie Cordero’s simple instruction to makeup artist Noel Jimenez, which got his frequent collaborator chuckling. “People backstage were teasing Jo Ann (Bitagcol, Cordero’s model) that she looked Chinese, just not rich,” the makeup artist said with a laugh.

Jimenez did a modified cat-eye on Bitagcol, and more than a few other models also sported the same eye makeup: Cat-eye is one of the big trends for Fall.

Cordero then opted for vermilion lips to top off his high-glam romantic look in the show opener.

Others chose either nude lips or an assortment of pinks, from virginal to fluorescent.

Bitagcol sported a classic sleek high updo, on top of which sat a tiara, with a medley of feathers at the back, the same plumes that adorned Cordero’s dress.

Joey Samson, known for his sharp tailoring, had model Grace Tagle made up with strong, smoky eyes with a well-defined cat-eye and bright, matte pink lips, a counterpoint to his rather unexpected frothy tulle dress.

Save for Jimenez, the MAC team led by Zeldy Liquigan and Odessa Andal interpreted all the fashion designers’ makeup pegs. Jing Monis Salon styled the hair. The models were shod in Stella Luna shoes.

Eric de los Santos, who dressed Melissa Frye in a slinky, fully beaded silver dress, chose a modern interpretation of the ’70s disco look: silvery flecks on the eyelids and pale, chalky matte lipstick on the mouth. Frye’s long hair was in a sleek ponytail.

Martin Bautista chose a low-side chignon with a side part on model Riana Matera, who also sported smoky eyes and dark wine lipstick. Not a few of the designers chose low chignons, while others went for slightly mussed-up versions of the classic updos.

Ivarluski Aseron’s model Kylie Verzosa wore her hair swept to one side on the back with cascades of soft waves framing her face. Ronaldo Arnaldo’s model Arci Muñoz’s upswept ’do also had wavy textures; ditto for Pauline Prieto’s, Chris Diaz’s model.

Jerome Lorico’s beauty peg called to mind “A Midsummer Night’s Dream”: a crown of wild flowers atop soft, wavy tendrils on one side.

In contrast, Randy Ortiz’s model Giselle Pacqueo wore her hair in a glamorous high bouffant with a sparkly hair accessory on one side.

Lulu Tan-Gan was among the few who broke the traditional makeup look mold. Her model, Karina Cabiling, who was dressed in a bohemian bridal frock in a mix of piña and Tan-Gan’s signature knit, wore pastel-blue eyeshadow and bright neon-melon lips. The boho look was finished off with Karina’s long hair worn in loose waves, parted at the middle; she wore three strands of beaded hair accents on her head.

Tan-Gan briefly expressed doubt about the makeup, but ultimately decided the unique look might not be such a bad idea.

“Yes, I think that’s all right,” the designer said as she gave her model another once-over. “They can’t all be the same. It’s good to be different.”