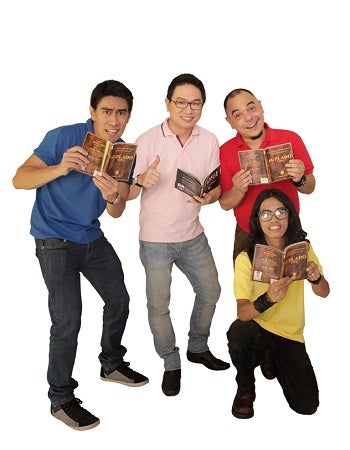 MANILA, Philippines—Arvin “Tado” Jimenez has been called many things.

He was called TV host with sitcom “Strangebrew”. He is called author with the publication of his books such as “Ikatlo sa Huling Libro”. He is called entrepreneur with his Limitado t-shirt line. However, one feather on his cap he proudly wears is Bookworm. Yes, that’s with a capital “B”, as he signs up as an ambassador for the Manila International Book Fair (MIBF), the country’s largest and longest running book fair, ongoing until Sunday, Sept. 16, at SMX Convention Center, Pasay City,

Tado, comedian, radio DJ, and TV host, came from simple rural beginnings. It was there in his provincial home town that he developed a love for reading.

“We really didn’t have much to do for entertainment in my province. Especially back then, there really wasn’t much choice. We had to turn to reading,” he expounds in the vernacular.

Some of his favorite books include a compilation of the comic strip “Cesar Asar’ by Roxlee (Roque Lee) and “The Catcher and The Rye” by American author J.D. Salinger.

“I loved ‘The Catcher in the Rye’ because it was a good book, yes. I especially liked it, though, because it contained a lot of curse words,’’ Tado interjects.

Who would have ever known, though, that the bookworm would turn into a book author? “Ikatlo sa Huling Libro” features part one of Tado’s silly anecdotes on life.

“I really meant that I make my books into a three part series. Rather than one thick book, I can gain a lot more money as an author by making three. Hahaha!” he jokingly replies.

Tado says he was inspired by Chopsticks cartoonist and fellow (MIBF) Bookworm Stanley Chi and his “Suplado Tips” series of books.

“When I was reading ‘Suplado’, I really laughed out loud at the funny tone of the book. And then, I though ‘Hey, I can do this too’.”

One of Tado’s favorite sections of the book he authored is the “How Pinoy Is” lists featuring specific characteristics that make items truly Filipino.

“This was actually a segment on my BrewRATS radio show. I decided to include it in the book because people generally had a good response to the lists.”

Asked about any future books in the future, he says readers should look forward to his upcoming “The Self-Centered Book”.

“It’s basically about me. What makes it unique is that I’ve actually asked people to write me sort of eulogies. This will be the ones included in the new book,” he expounds.

Tado, as well as cartoonist Stanley Chi, and comedian Ramon Bautista will launch their respective books at the MIBF on Saturday, at 2 .p.m.  at SMX.