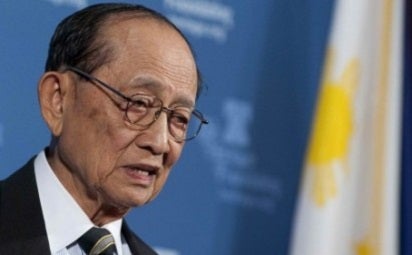 In his second stop at the Philippine Military Academy here on Sunday, Ramos, also a former Armed Forces of the Philippines chief of staff, proved that he still has the stamina to travel and engage the younger ones even at the age of 84.

During the program, he lightened the mood by doing 101 sit-ups and 51 push-ups alongside PMA cadets.

Ramos, however, declined answering questions on politics when reporters sought him after he delivered his message.

The tour was part of the roadshow that also featured the film, “Tagaligtas,” a documentary on the Special Action Forces (SAF) of the Philippine Constabulary, which Ramos also headed during Martial Law.

“The documentary is serious enough and [Ramos] wanted to lighten things up a bit. But he still gets his message across,” said Mae Gaffud, deputy executive director of the Ramos for Peace and Development Foundation Inc. (RPDev).

Ramos, who wrote the book’s foreword, was in a good mood while delivering his message after the hour-long film viewing. In several instances, he asked the audience to jump with him and have their pictures taken so these could be posted on their Facebook accounts.

But turning serious, he challenged his audience to persevere.

“This is about sacrifice, leadership, patriotism and good governance among Filipinos who want a better future. Isigaw natin, kaya natin ito (Let us proclaim, we can do it)!” he said.

He said Filipinos should be more caring and daring and should share whatever blessings they have.

“Caring and sharing is easy because it’s natural to us, but daring is something else. Daring can be done without going to combat; no one needs to engage in it,” he said.

Ramos said the new battleground is the environment. “You should be daring to be good citizens of Baguio, mahirap ang buhay (life is difficult), madalas nagbabagyo (typhoons are more frequent) … You know, in Baguio, we are already running out of trees, there are always landslides and [the volume of] garbage is increasing. We hope that we will honor and take care of Mother Nature,” he said.

He paid tribute to soldiers and policemen who served and are continuing to serve the country.

The film, “Tagaligtas,” according to its promotional brochure, documents the beginnings of SAF in the 1980s and discusses its role in ending the Marcos dictatorship in February 1986. It also featured how its members defended the Constitution during the administration of President Corazon Aquino and how they fought terror and insurgency during the Ramos administration.

The 500-page “Silver Linings,” according to its authors, covers more than 50 years of Philippine history, told from the points of view of key military and police officers involved in the 1986 People Power revolt.

It also talks about how the Corazon Aquino administration battled nine coup attempts, the highlights and problems of the Ramos presidency, the decline of the leadership of ousted President Joseph Estrada, the scandals that hounded the administration of former President Gloria Macapagal-Arroyo and the rise of President Benigno Aquino III.