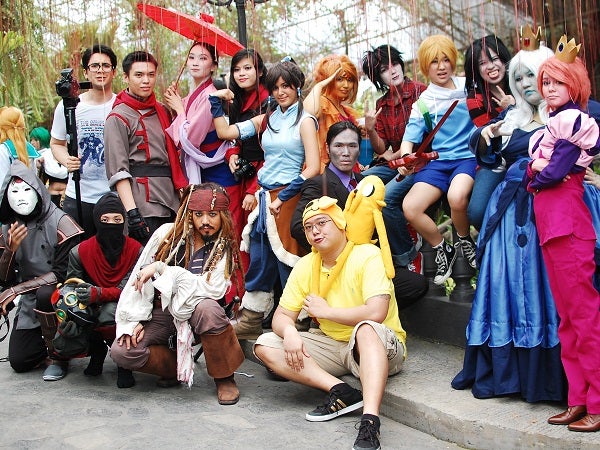 MADAMI GROUP SHOT ‘Cosplayers’ from around the country converge at Fernwood Gardens for one whole day in a recent event dubbed “Fantasy Quest II: The Saga Continues”. Photo by Jonathan de Belen, INQUIRER.net

How ‘cosplaying’ boosts a person’s creativity

MANILA, Philippines—When an anime fanatic attempts to dress up like one of his favorite characters—patiently and carefully putting together pieces of materials gathered for a costume he would wear in a cosplay (short for costume play) event—some people may ask “why cause yourself all the trouble?”

But for cosplayers, it’s worth every penny because they’re having a good time.

In a recent cosplay event tagged “Fantasy Quest II: The Saga Continues!” held at the posh Fernwood Gardens in Quezon City, organized by Cosplay Network Philippines, its Facebook page founder Rainier de Guzman said cosplaying is one good way how a person can boost his/her creativity though this hobby requires some bucks to pull it off.

“It [cosplaying] is very expensive, but it really depends on how creative and resourceful a person is,” he said, considering all the materials one needs to produce just for a single costume starting from the make- up, to the hair, to the accessories, and to the costume itself.

“Madami makikita sa paligid na pwede namang gamitin sa (We can find a lot of materials around us that we can use as) costume,” de Guzman said, adding that even the most popular cosplayers don’t always buy their pieces.

Cosplayer Jevelyn Domingo, a 23-year-old call center agent who went in a Ragnarok character, said she has been joining cosplay events for almost a year now and had completed five different costumes.

“I’m not gonna lie, doing all those costumes is really expensive. Depending on the kind of costume, you should be willing to spend P1,000 to P3,000, or more,” she said, but added that she loves what she’s doing considering that she has been into anime cartoons since she was a child.

“It’s a passion, it’s a hobby. I’ve been wanting to do this and now I’ve been given the opportunity, I’m enjoying it. I’m enjoying life,” Domingo said.

But just the effort itself, de Guzman said, was one of the main reasons why he decided to set up the Cosplay Network Philippines organization in July 2010. “A Cosplay community . . . [that aims] to promote the artistic skills and talents of individual cosplayers and provide a stimulating environment for the Cosplay community to interact with and learn from each other,” its Facebook page read.

Originally a toy collector of Transformers figures, de Guzman said it was during one of the conventions he attended back then when he pondered the idea after getting curious of why cosplayers do their thing, when they seem to be getting nothing from their efforts.

“Naisip ko: [since] madaming natutuwa sa kanila . . . bakit di ako gumawa ng way para mapasalamatan naman sila . . . para mabalik naman sa kanila at makilala naman sila na (I thought, since many are a happy about them, why not create a way to thank them, to return the favor and for them to be known),” he recalled, noting that Filipino cosplayers are really good in doing their stuff because they do it by heart.

But for this year’s event, de Guzman said that he was only looking forward to having a great time as a hobbyist with his team, which is mostly made up of photographers.

De Guzman said he wanted to take the cosplayers in a special place where his team, and other photographers can create more beautiful pictures using Fernwoods’ verdant oasis as backdrop.

“Kasi usually cosplays are being held in malls. So kapag nagpi-picture ka, ang makikita mo is mga tao, mga (if you’re being photographed, what you see around are people and) stalls, etc. We want something special naman,” he said.

Apart from sharing the good night with them, de Guzman said they invited international cosplayers to give the local cosplayers a view of how the industry works in other countries, vice versa, and to exchange knowledge and opinions with them.

US-based Filipina cosplayer Jerry Polence said that in her three-years’ stay in the US, she thinks that if only for the skills, she believes that Asians, especially Filipinos, “are more skillful because they don’t have much resources . . . but are able to make do with what they have.”

Moreover, cosplaying here in the country, Polence said, is “more social,” unlike in the US where there are instances when participants are too busy with interviews, and autograph-signing with animators, among other activities.

For newbie cosplayers, she suggested that they first go for simpler costumes, but advance bit by bit into doing something unique to which people will be in awe and will go like “what the hell was she thinking?”—just like how she does it when she was still competing.’

“I don’t know how they can move and play around around in them. They look very beautiful,” Viospace added, noting that she gets really impressed with large armors considering that she’s not so good in making them. She started doing cosplays in 2008.

Just like most cosplayers, Viospace said she started loving anime from reading Manga, or Japanese comic books. And now that cosplaying has become a trend, she said she’s really enjoying because she gets to bring to life her favorite characters, and share it to other people.

“And when you meet friends with the same interest, it’s more exciting because you can try it together and go crazy . . . that’s the fun part,” she said.

Other international cosplayers were Kosmo, Christy, Reiko, Naokunn and Kaika, all from Singapore; Lavena of Malaysia.

With everybody dressed in their best, what better way to make the night more memorable than gathering everbody in a Grand Cosplay Ball?