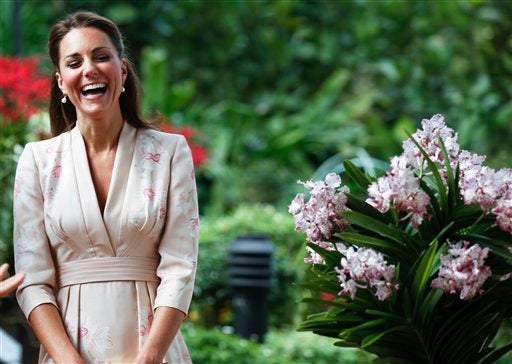 PARIS—French authorities on Tuesday banned Closer magazine from any further distribution of pictures of Prince William’s wife Catherine topless and began a criminal probe into how they were obtained.

An injunction granted by a court at Nanterre in the Paris suburbs ordered the magazine to hand over all forms of the pictures to the British royal couple within 24 hours or face a 10,000-euro ($13,000) fine for every day’s delay.

The injunction also bans the glossy magazine from reusing them in print or on its website and re-selling them on pain of further 10,000-euro fines for each infraction.

William and the former Kate Middleton, who are currently on tour in the South Pacific, welcomed a verdict aides hope will act as a deterrent against future intrusions on their privacy.

“The Duke and Duchess of Cambridge welcome the judge’s ruling,” read a statement from St James’s Palace in London.

The injunction will have no impact on the pictures that have already been widely circulated on the Internet following publication by Closer as well as Ireland’s Daily Star and Italy’s Chi magazine.

It was granted hours after a prosecutor launched a preliminary investigation into whether the magazine and the photographer or photographers who took the pictures had committed a criminal act.

The terms of the injunction mean it is virtually certain to lead to a full investigation of allegations that taking and publishing the pictures violated the couple’s right to privacy.

Tuesday’s ruling said the pictures were “by their nature, particularly intrusive” and had been taken in a place where the couple could “legitimately assume they were safe from prying eyes.”

The royals’ criminal complaint cites persons unknown but aides say they want proceedings against both the editor of Closer and the photographer (or photographers) who took the shots of the couple at a chateau in the south of France earlier this month.

In theory both could face fines of up to 45,000 euros and prison terms if convicted. In practice, no one has ever been imprisoned for breaching the privacy law and fines are usually well below the maximum.

The couple’s lawyer Aurelien Hamelle had told the injunction hearing that the images of “a highly intimate moment” were particularly distressing for the couple in light of William’s mother Princess Diana’s death in 1997 in a car that crashed in a Paris tunnel while being pursued by paparazzi.

The identity of the photographer remains unknown and French law protecting journalistic sources means Closer is unlikely to be forced to divulge it.

Britain’s tabloids have launched a hunt to find the photographer with Tuesday’s Sun claiming “Le Rat” was either a Frenchman called Jacques or a Scottish freelancer.

Local newspaper La Provence published pictures of the royal couple at the chateau on September 7 but denied Tuesday that its photographer had taken the topless images.

Chi editor Alfonso Signorini has defended the images as being part of a legitimate news story about the ‘modern’ face of the British monarchy.

He also insists that no law was broken because they were taken from a public road. That argument will also be used by Closer in the event of a criminal trial as will the fact that the royals did not raise any objection to La Provence’s pictures.

Both the French edition of Closer and Chi magazine are part of the Mondadori group owned by former Italian premier Silvio Berlusconi, who has backed his editors.

In contrast, Irish Daily Star editor Michael O’Kane has been suspended and the paper’s future is in doubt following the announcement by its British joint-owner Northern and Shell that it would be withdrawing from its partnership with Ireland-based Independent News and Media over the pictures.