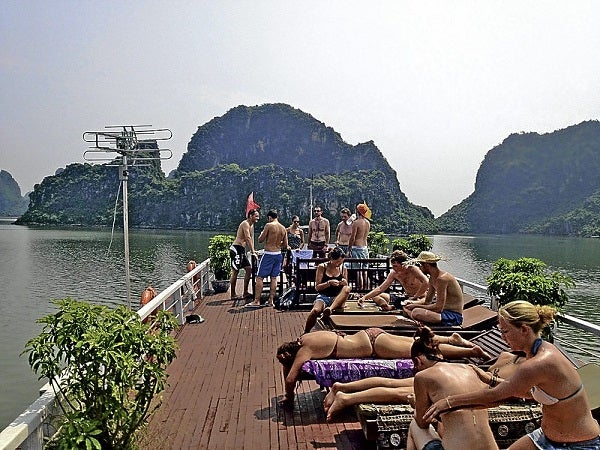 Hanoi, the best coffee, and getting lost

Unsurprisingly, the cheapest international flights are those that leave Manila at midnight. Which means you arrive, fuzzy-haired, at some strange airport during witching hour, and you’re not sure whether the folks at immigration are squinting suspiciously at you and your passport photo or just trying to fend off sleep.

We arrive at Hanoi at 3 a.m. on a Tuesday, and momentarily confused, begin lining up at the visa counter. We are shooed away by the man-in-charge. B, who is quickly turning out to be the more reliable travel enthusiast between us, had thought of calling our hotel and arranging for airport pick-up in advance. I am grateful, as this means we skip having to transact via sign language with a crowd of vigilant taxi drivers moving in for the kill.

For $20, we are driven from the Noi Bai International Airport to Hanoi’s Old Quarter in quiet comfort. Beside us, locals zip merrily past, casually perched, un-helmeted, on motorbikes piled high with dry goods. Nobody seems perplexed in the slightest about speed limits. I take photo after photo, intrigued.

Church Hotel is a quaint boutique right in the middle of the Old Quarter. B found us a good deal on Agoda.com and booked a double for three nights. We are greeted cheerily when we come in, even though it is 4 in the morning and we have no dongs to shell out as tips.  Of course, the room is smaller than the website had led us to believe, but it is cozy and well-designed, like a model unit in a hip high-rise. Best of all, the room comes with a daily breakfast buffet.

The next day, we step into the chaos that is Hanoi. We are determined to explore the Old Quarter, where each street is named after the type of commerce that used to flourish in it. I realize two things simultaneously: one, the architecture is amazing, and two, spending too much time gaping at it can get you run over.

We learn two more things after that: one, women vendors in Hanoi have incredibly strong shoulders, and two, you must be wary of women who sell fruit, especially those who are determined to make you wear their hats.

We stroll around the Quarter’s artery of shops, half-lost, relying on pure instinct to get us to Hoan Kiem Lake, the biggest and most popular among Hanoi’s many. It is midday, and the streets are spilling with flowers, silk, tombstones, pots, and noodle spots. A lady trundles by, a sack of clothes on her back. I get a nice Hanoi shirt for 150,000, down from the original asking price of 200,000. I am smug, until B points out the exact same shirt a few minutes later, on sale for 80,000.

Vietnamese coffee in Vietnam is, hands down, the best coffee I’ve had anywhere. It is sweet, but strong, like spiked chocolate milk. On our way to the lake, B and I had come upon a small sign that leads to a tiny trail and out into a second-floor balcony, where we can watch the developments below, to the chattering of pretty birds inside pretty wooden cages.

It is a small café, and the owner, an old man with a huge smile, is pleased to serve us. We order four iced coffees for 20,000 dong each, and glasses of ice-cold water. We take in Hanoi’s energy from our roost. Inside, the owner’s daughter watches “Adventure Time.”

Satiated, B and I finally find the lake. We follow a group of tourists and end up at a temple, where enterprising young guides speak French, English, and Spanish. I attempt to blend in with the tour groups, nodding appreciatively at plaques and a giant model of a tortoise inside a glass case. B is in the background, planning our lunch. He loves Vietnamese food, so this involves a serious consideration of options.

We take a Vietnamese version of the Philippine sidecar, the cyclo, to our chosen restaurant. Of course, the driver’s asking price magically doubles when we embark, but with visions of having paid thrice the normal price for a pack of pineapples still fresh on his mind, B is having none of it. We give the cyclo driver 100,000 dong, as agreed upon, and move towards the beckoning gates of Quan an ngon.

We feast on bahn mi and pomelo salad and beef noodle soup and fried beef and spring rolls amidst other happy diners. The place is not expensive, and the menu offers pretty much everything in local cuisine, which makes ordering easy.

We would try a bunch of street food places later on, including grilled ostrich at a bustling street corner, fried eel and suspicious balls of meat at a particularly garish stall, and a “Lonely Planet”-approved spot for the best bun cha in Hanoi, but we would go back to this restaurant for our final meal in the city. Sure, the idea of not knowing what exactly you are jamming down your throat sounds fun, but it gets perplexing after a while.

On our fourth day in Hanoi, we are gliding across Halong Bay, atop a rusty ferry boat with 18 other tourists, each of us having paid a different price for the same tour. None of them has seen his home for at least a couple of months. They regard B and I with a kind of curious awe, after we inform them that we were going home the next day.

“Yeah, well, the Philippines is just a couple of hours away by plane,” we explain, and they are amazed. Being an island isolated from most other Southeast Asian countries, the Philippines is usually skipped by backpackers on separate quests for the meaning of life. Not a lot of them knew much about the country.

By sundown, the questors are happily jumping off the boat and into the bay’s dark, murky waters. B goes for a jump himself, but I stay on deck, thinking of Palawan, where the waters are blue and, well, actually swimmable. The view is breathtaking, though, with the sky and the hundreds of tiny islets simultaneously turning shades of orange.

A little later, the boat crew brings out fresh oysters and alcohol, and the quiet night is soon shattered by tourists yodeling and bleating along with the videoke machine on board. An hour later, the machine’s plug is yanked out by an angry crew member, who is yelling something in Vietnamese. He did not seem pleased with the warbled version of “Summer Loving.”

B and I had similarly opted for a night flight to Manila, so after the sweltering four-hour bus ride back to Hanoi city the next day, we search for a spa where we can take showers, change clothes, and perhaps get a nice massage.

Of course, we can always just head straight to the airport and into the plane, scruffy and nonchalant, oblivious of earthly needs, such as soap and shampoo. But we weren’t really searching for the meaning of life, at least not on this trip. Right now, we are just happy to have found the best place for coffee.