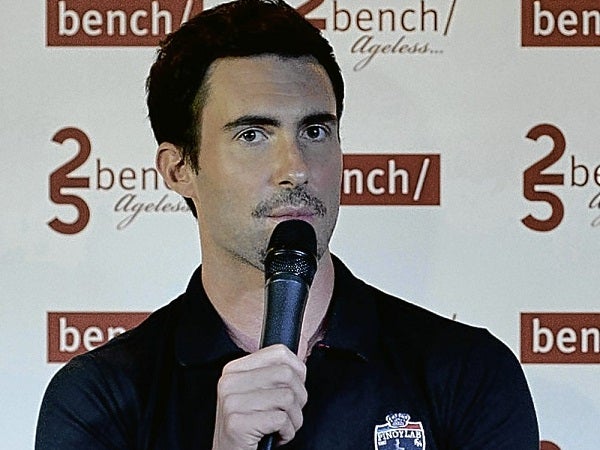 Adam Levine, up close and ‘exposed’

“Don’t worry, we’ve removed all the questions that read ‘Will you marry me?,’” host Raymond Gutierrez reassured Adam with a laugh during the “Bench Rocks With Adam” press conference at The Peninsula Manila’s Salon de Ning.

No questions about going shirtless, posing nude, or being a veritable sex symbol in the eyes of many hormonally charged females (and females-at-heart). It was quite ironic, actually; based on the risqué shoots he’s done for foreign magazines, he seems quite comfortable doing all three.

But whether he likes it or not, Adam’s obviously got us wanting to see more of him. Honestly, who wouldn’t want to? Despite his apparent refusal to give us a sneak peek of his “Moves Like Jagger” body, he seems to have completely charmed the ladies in the house, especially those in front. While mulling over a question, he noticed and complimented Inquirer columnist Tessa Prieto-Valdes’ outfit, which she cheekily said was inspired by Victoria’s Secret models. “You look like one,” he countered, whistling. “The mommy version!” she added with a laugh.

For someone who’s claimed in previous interviews that he loves women, Adam sure doesn’t like talking about them. “It makes me sound like Fabio or something,” he remarked, drawing giggles. Maybe he was being coy, or maybe he just didn’t want the conversation to go where he didn’t want it. Fair enough, but we still want to see him shirtless. Bench Body, anyone?

More excerpts from the short but sweet media meet-and-greet:

Musically, I was all over the place. I love The Beatles, they’re my favorite band growing up. My parents were huge Beatles fans. The Rolling Stones, Bob Dylan, Stevie Wonder, Marvin Gaye, Bob Marley … you know, all those great [musicians]. When I got older, Nirvana came out, and Pearl Jam, those bands of the ’90s … a lot of pop music, a little rock ’n’ roll. Just a lot of music; I never really liked a specific genre. I just love all music.

On being a music icon-cum-stylesetter:

It’s crazy to even hear that from you. I don’t really consider myself as anything other than who I am. I’m just a really happy, healthy guy. I love music, I love everything I do. See, that’s the thing—I’ve been really lucky enough to do things that I love, with music and this whole thing with “The Voice.” It’s amazing. It just continues to be fun and surprising.

Good jeans. Jeans are something you could wear 50,000 times before they’ll start to smell. (Laughter) And a lot of socks and underwear. Like, 90 percent of my bag is clean underwear and clean socks. (Laughs) You never know how long you’ll be gone and you can’t really rewear those things; it’s kinda gross.

On starting a record label (222 Records):

It’s all very new. I’m kind of just following it day by day, record by record, artist by artist. We signed this amazing girl, Rozzie Crane, who’s the best singer in the world. She wanted to try out for “The Voice” and I said, “No no no, don’t do that. I’ll start a record label.” I actually started a label for Rozzie, she was the first person that I’d signed.

On his Maroon 5 band mates:

They’re like my brothers. It’s like you fight with your brother and you beat the sh-t out of each other. (Laughter) It’s nice to be with people you really love and respect and get into really big battles with. You just know that no matter what happens, in the end it’s going to be okay, and that’s a really valuable thing. I wouldn’t be able to do this whole thing if it weren’t for them.

On his favorite song:

“Daylight” [is] my favorite song on the album. I have really high hopes for it; I think it could be a really humongous song. It’s really emotional [and] special.

On naming their album “Overexposed”:

In a weird way, if you don’t want people to think you’re overexposed, you name your album “Overexposed,” because then you can subvert the potential danger of overexposure. It sounds kinda crazy, but we just wanted to come out and say it so we could avoid it. I think that now, people appreciate that weird sense of humor in the fact that we’re everywhere.

On what sets Maroon 5 apart from the rest:

I think the music is unique. It’s pop music, which is something you want everyone to love, but … we never wanted to sound cheap or careless. I love lyrics and music and making sure it’s as good as it can be. [And] I think my voice is unique. I didn’t say it was good, I said it was unique. You’ll know that it’s me whether you love it or hate it.

The best advice I can ever give is that whatever it is you love to do, whether it’s singing or acting or crunching numbers—whatever it is you’re passionate about—just do it all the time. The more you do it, the better you can get. Obviously, it depends; if you’re really bad, maybe somebody should be honest with you and say it at the outset. (Laughter) But if you’ve got a certain knack for something, that little spark, that’s all you need. You just do it all the time.

I don’t think there’s a secret to success or longevity or any of that. In a very egotistical world, especially in our industry. I think you should shed off as much of your ego as possible and do what’s best for the greater good or whatever it is you’re trying to succeed in. It’s important that as time goes on, to not be too consumed with yourself, to see how you can branch out and try a few things. [It] can backfire, but you have to take risks; sometimes they don’t work, but keep taking them because eventually, they will.