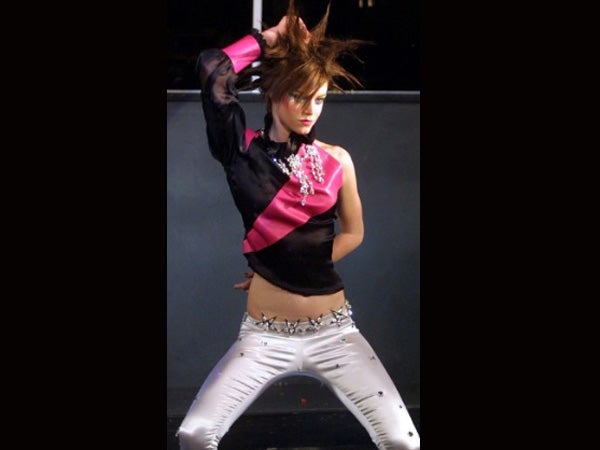 MILAN – As Italy’s top fashion brands hit the catwalks in Milan this week, the country’s young designers are finding other ways to show off their collections in a bid to break into in an increasingly challenging market.

The stagnant Italian economy has hit the industry hard, driving many big labels to stronger or emerging markets, leaving up-and-coming designers who don’t have the resources to follow hoping to woo buyers through other means.

In a frescoed room hung with chandeliers off one of Milan’s busy streets, Sicilian designer Fausto Puglisi is rushing between guests, giving each a personal, brief rundown of his collection which is shown off on posing models.

“Young designers have to have the cheek to say ‘to hell with the trends, I’m original, my creations are beautiful and I believe in them’,” he said.

“I’m Sicilian, so I’m passionate and disobedient. I may have a formal runway show one day, but now I’m concentrating on building relationships with buyers,” which he does at intimate presentations that run alongside big fashion events.

The 35-year-old may have had no formal design training but he already has an edge on other independent Italian designers: celebrities such as Madonna and Beyonce have snapped up his jewel-encrusted Roman gladiator-inspired creations.

Puglisi is just one of dozens of independent designers who hope to attract the attention of the hundreds of international buyers attending catwalk shows in Milan by presenting collections at unique locations or in unusual ways.

“It’s increasingly difficult for new designers to emerge in Italy. There have not been many new names coming through onto the fashion scene,” said Salvo Testa, a professor in fashion management at Milan’s Bocconi University.

“The young ones need a vast amount of money to get noticed, or they need the courage to present really innovative products in innovative ways,” he said.

Marta Ferri, 27, is hosting a two-day exhibition in a ball room, where she will show off her spring/summer 2013 collection modelled through a series of striking photographs taken by her photographer friend Margherita Chiarva.

Ferri, who began by creating clothes for herself and friends, said she drew on the artistic skills inherited from her photographer father for the show concept, and hoped to “stand out from the crowd by going against the trends.”

A stone’s throw from the city’s Gothic cathedral, the young designers behind the Leitmotiv brand – which is sold in 60 multi-brand stores across Italy – had a similar idea, putting on a show that drew on their artistic backgrounds.

“It’s not easy, because we do everything ourselves: design the clothes, source the fabrics, organise the events, seek out the buyers,” said Fabio Sasso, who launched the brand five years ago with Colombian Juan Caro.

“We didn’t want to do the traditional thing. I studied art history and Juan did painting and we drew on those skills to create an exclusive event with a backdrop for the show where moving images capture our design prints,” he said.

Original presentations where designers can get in direct contact with shoppers may be the way to go, says Testa: “many brands are changing their way of communicating, creating personal links through events or the Internet.”

According to Barbara Toscano, the director of fashion institute Marangoni’s Milan campus, “launching a new brand is certainly getting much harder.”

“Italian consumers are highly evolved and demanding. Designers need to present a project that is original and versatile, and they also need help from the institutions, which can create occasions for meeting buyers and the media.”

One such young designer who has been given a helping hand this week is Michela Loberto, 35, who showed off her first collection at a fashion bloggers’ cafe set up by the Food is Fashion event which runs alongside the catwalks.

Her dresses and coats cut from vintage material and worn with gas masks piqued the curiosity of young fashion watchers dropping in for a drink.

“It’s a world of sharks out there. I’m not aiming for stardom, at the moment I just want to get my own workshop and then have my designs sold in Berlin and London. The key is to remain niche, with clothes you can’t get anywhere else.”