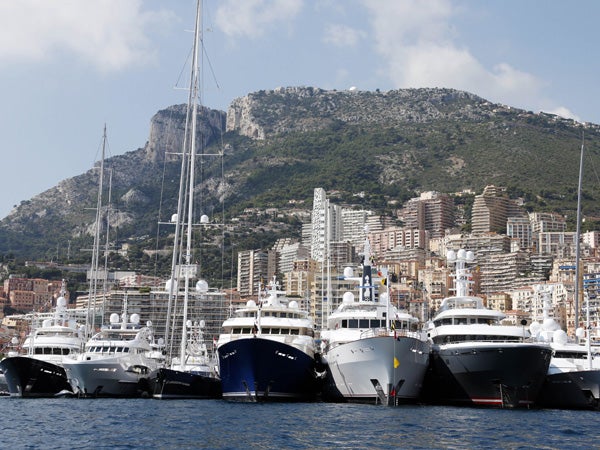 A picture taken on September 19, 2012 shows yachts moored at Port Hercules in Monaco during the 22th edition of the International Monaco Yacht Show. The Monaco Yacht Show is considered the most prestigious pleasure boat show in the world with the exhibition of 500 major companies in the luxury yachting and a hundred super and megayachts afloat. AFP / VALERY HACHE

MONACO – As the world’s biggest yacht, codenamed Project Azzam, nears completion under a veil of secrecy in Germany, the trend for ever larger floating palaces was on full display at the Monaco Yacht Show this week.

Considered the most prestigious event of its kind in the world, this year’s show, which wrapped up on Saturday, included a record six megayachts, notching up an average length of 80.11 metres (263 feet).

These giants of the seas are around twice the size of the average superyacht, already around 45 metres in length.

“Yachts are certainly increasing in length,” Ellie Brade, editor of Superyacht Intelligence at the Superyacht Group of publications, told AFP.

To date, there have been 88 yachts of 80 meters and over delivered worldwide, and there are 19 currently under build, and according to Brade there no indication the trend is going to slow down.

The most hotly awaited new build, Project Azzam, is set to become the world’s largest megayacht, and oust Russian tycoon Roman Abramovich’s 162-metre Eclipse from the top of the superyacht league table.

It is under construction at Germany’s Lurssen yard, although the name of its owner is kept jealously under wraps.

Size in the yachting world counts for a lot, industry experts confirmed at the four-day annual show.

“There is definitely an element of “I’ve got a bigger boat than yours”, an executive at a leading yacht broker told AFP. “It’s boys with their toys. They want the biggest and the best.”

One-upmanship aside, the appeal of a megayacht is the onboard volume they offer.

“You might want to put in a cinema or a gym, so the more length you have, the more options and the more room you have,” said Brade.

The brief from the sports-mad owner of the 78.50-metre motor yacht Hampshire II, showing here this week was simple: To have fun on board.

So the yacht’s helipad can be converted into a platform for baseball, tennis or soccer, with a giant net that can be placed around the deck to keep the balls in play.

A 3D cinema graces the brand new 88.5-metre Nirvana that made its world debut here, along with two on-board vivariums home to a chameleon, water dragons, bearded lizards and turtles.

Megayachts are proving highly popular with people wanting to rent – or charter as it is termed in the sector – the yachts for holidays or business, charter brokers said here.

“There is a lot of interest in the big, recent modern boats, particularly from Russian clients,” Fiona Maureso, head of charter at Monaco-based Yachting Partners International, told AFP.

The boom has happened in spite of practical limitations — since the largest yachts are too big to berth at many of the world’s most beautiful ports and islands.

Italy’s fabled fishing village of Portofino is too small for very big yachts, as are many small Caribbean islands such as the exclusive St Barts.

But anyone considering buying or chartering one of the superyachts on show here this week in Monaco will need deep pockets.

And the largest megayacht at this year’s show – the luxury 90-metre-long sailing yacht Athena, which is one of the world’s largest three-masted schooners – is on sale from Monaco-based broker Y.CO for a cool 72 million euros.