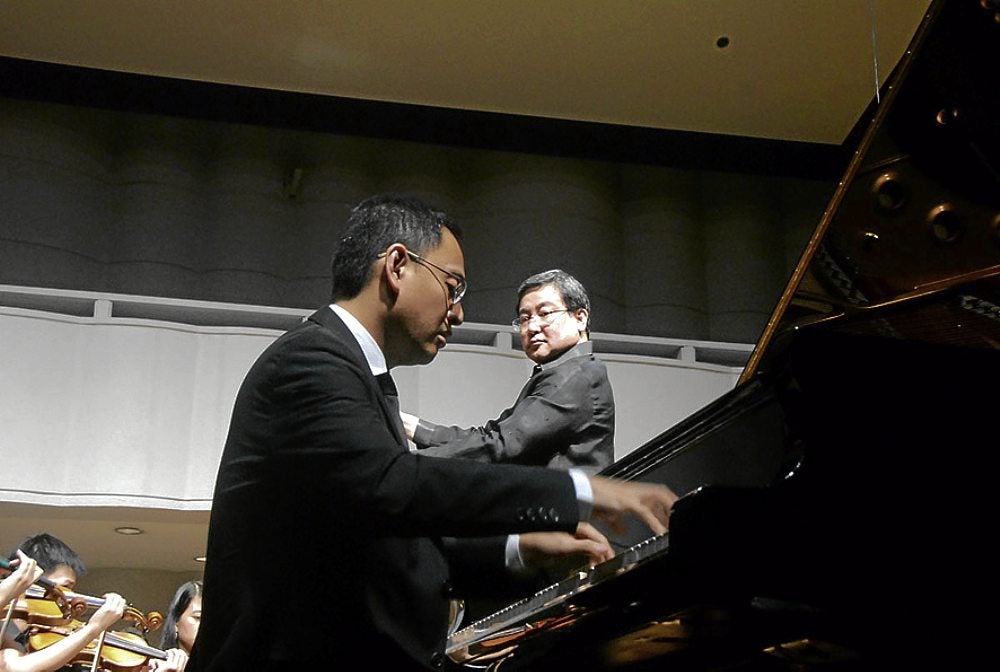 With Arturo T. Molina as conductor, the concert was a display of lustrous symphonic sound.

MSO is composed of young musicians and one is certainly elated over its solid musicianship that has become its hallmark. All of a sudden, the Francisco Santiago Hall became too small for the sterling symphonic sound of MSO.

In Tchaikovsky’s symphonic poem “Francesca da Ramini,” the opening number, the MSO dazzled the audience with the verve and elan of their rendition, literally transporting the hall into a tight chamber of Dante’s vision of hell. It played with fidelity to the score, following the composer’s literal depiction of  hell.

Vividly the MSO depicted the agony of the souls in hell in those dark, stormy passages expressed in whirling chromatics reminiscent of Wagner.

The musicians gave no let-up to its vigorous playing until the tender, plaintive moment came: the adagio solo played eloquently by the clarinet (bravo!) that recalled the happy times of Francesca and Paolo before their illicit affair damned them in hell, immortalized in Dante’s line “There is no greater sorrow than to recall a happy time in misery.”

When the last note faded out, the audience burst into a hearty applause.

Rachmaninov’s opus, the Rhapsody, also brilliant, came next with the featured soloist, Asuncion.  Of course, the term “rhapsody” is misleading as the work is actually a set of variations based on Paganini’s Caprice No. 24.

The work is outlined in three main sections, with the famous 18th variation, lasting only a minute or so, as the second movement. Unlike a concerto, it is a fleeting work that is done in some 25 minutes.

(When the “Dies Irae” was played in the 7th variation, one quickly recalled the macabre ambiance of the previous Tchaikovsky symphonic poem.)

The brilliant sound of the orchestra drowned Asuncion’s playing on a brand-new handcrafted Kawai Shigeru piano (courtesy of Lyric Piano). His clean and clear tones did not have much depth to evoke Rachmaninov’s brilliance. The famous 18th variation itself did not ring a bell.

One felt his tones should have more muscle. Thus when the orchestra played tutti repeating the same melody of the said variation, the piano’s embellishments could not be fully heard.

The same weakness was shown in the brief cadenza and the octaves in the succeeding variations, which sounded faintly rather than thunderously.

In the final number, Shostakovich’s Symphony No. 9 in E-Flat Major, the orchestra was back at the helm, playing with much inspiration. It was a great moment for listening.

Now the heavy mood brought in by the dark ambiance the opening number had evoked was transformed into a lighter, brief work that called for leisurely listening.

Interestingly, the program was built on the theme “From Darkness to Light.” Undoubtedly, when the Shostakovich opus was done, one had a great feeling of relief, of liberation.

The audience had been immersed in  the dark tones of Tchaikovsky’s work, only to be lifted and emancipated later by  Shostakovich’s work, with Rachmaninov’s music providing a witty transition. Bravo, MSO!