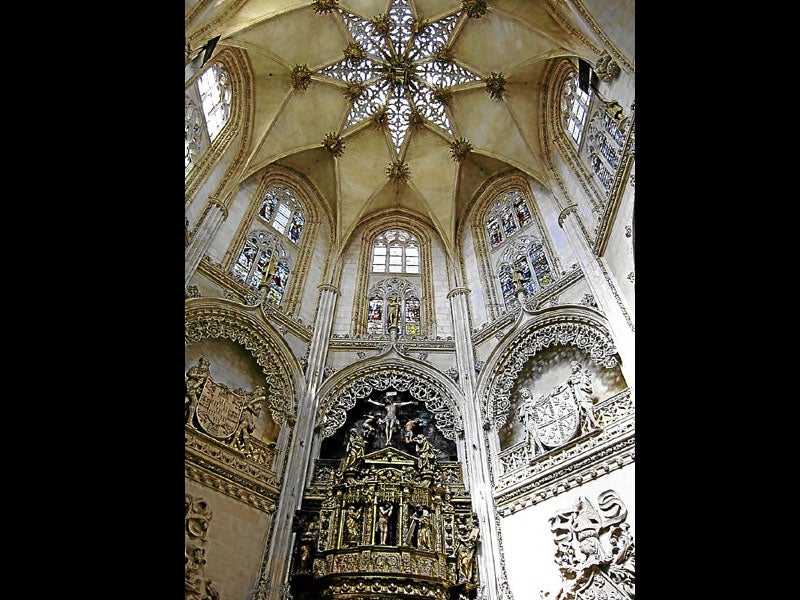 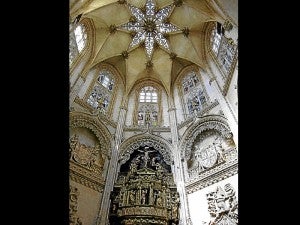 Millions through the centuries have made the religious pilgrimage  to Santiago de Compostela, in Galicia, Spain, the shrine of St. James the Greater.

Today, many pilgrims, however, take the path no longer strictly for religious reasons.

Tourists toward Santiago,  taking the historic French Way, have many points of interest that aren’t strictly religious.

The places and things you must not miss on the Camino Frances:

1. Alcala de Henares. This quiet town 35 km from Madrid is the birthplace of Miguel de Cervantes, author of “Don Quixote.” The author’s birth home is now a museum.

A Unesco World Heritage Site, Alcala is also home to one of Spain’s most prestigious universities (and the second oldest), the Universidad de Alcala, home of the Cervantes Prize, the celebrated literary prize in the Spanish-speaking world. The town’s cathedral is dedicated to the two boys martyred during the religious persecution of the Roman emperor Diocletian, the same boys mentioned by the character of Nicole Kidman in the horror-thriller “The Others.”

This is also the birthplace of Catherine of Aragon, the English monarch. When Madrid hosts World Youth Day next month, Pope Benedict XVI is expected to visit the Archbishop’s Palace here.

2. Paradores. The Spanish government has transformed historic buildings—castles, palaces, hospitals—into  four- and five-star hotels that are in themselves tourist destinations. The Paradores are scattered all over the country, and on our media familiarization tour, we stayed in five.

We’re not going to lie: Some can be daunting for Filipinos weaned on  stories of ghosts, fantasmas or espectros, as the Spanish call them. (Our irrational fear the Spaniards found comical, and perhaps, ridiculous. The staff assured us there are no fantasmas in the hotels—save for one, but we’re not saying which one.)

The one in Alcala, formerly a part of the university, was a prison until 1980, but has been transformed into a lovely, modern hotel.

The Parador in Santo Domingo de la Calzada, meanwhile, was a 12th-century hospice for pilgrims, and its architecture still bears remnants of its past: Gothic arches, stained glass ceilings. It’s right next door to the cathedral, where the relics of Santo Domingo are; it was he who built the hospice. 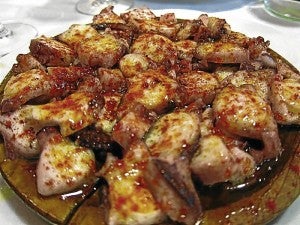 The Hostal de San Marcos, in Leon, was built in the 12th century as a monastery by one of the 13 brothers who founded the Order of St. James. It was replaced in the 16th century to feature a mix of Gothic, Renaissance and Baroque architectures. Its history is sad and quite daunting: During the Spanish civil war, German Nazi allies used it as a concentration camp to experiment on methods they would later use on the Jews during the Holocaust. Of the 7,000 prisoners tortured here, 2,000 are believed to have been killed.

A stark contrast is the new and modern Parador in Villafranca del Bierzo, reopened only last December after two years of extensive renovations. Ask the restaurant for the arroz con botillo, a rice dish with a local chorizo. Unforgettable!

The Parador de los Reyes Catolicos in Santiago de Compostela is one of the oldest hotels in the world (it previously claimed to be the oldest, until they discovered an older one in  Japan, according to a hotel staffer). A former pilgrim hospital, it’s perfectly situated on Plaza Quintana, right across the cathedral. If you ask the hotel guide nicely, he might tell you where the morgue used to be. 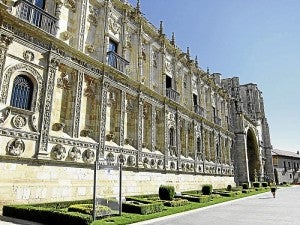 3. Cathedral of Santo Domingo de la Calzada. The sound of a rooster crowing during Mass may be disturbing in any other church but here. Legend says a German family of pilgrims made a stop in this town on their way to Santiago. The girl in the inn fell in love with the pilgrims’ son but her affection was unrequited. The spurned girl framed the young man for theft and he was hanged to death.

On their way back from Santiago, the couple made a stop in the town to find that their son was alive. He said Santo Domingo brought him back to life. When the couple told their story to the judge, he said it was as preposterous as saying the chicken on the platter that he was about to eat would come back to life. The bird suddenly grew its feathers back. Thus, a rooster and a hen are devoted a place of honor, a holy coop if you must, inside the cathedral.

4. Catedral de Burgos. The town of Burgos in Castilla y Leon region was one of the richest in Spain in the 13th century owing to merino wool trading. In its center is the magnificent Gothic cathedral built in 1221. Unlike in other places where church construction could get interrupted for dozens of years on account of absence of funds, Burgos was different. The naves were “sold” to rich families so building the cathedral was nonstop.

They were “resold” as families moved or their fortunes changed. It has 20 beautiful chapels, each different from the next. The perfect vantage point, in our opinion, is Meson del Cid, where we stayed; it’s right across the cathedral with unhindered views from the windows. 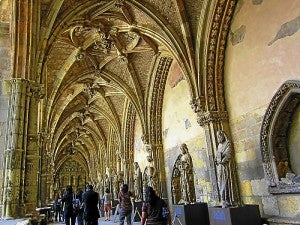 5. Iberico steak and morcilla. One of our most memorable meals on this trip was at La Favorita in Burgos, a Michelin-recommended restaurant famous for its Iberico steaks. When some expressed doubt that we weren’t eating beef, our Spanish guide explained that if it’s “Iberico,” it means pork.

It also has the best morcilla, pig’s blood sausage mixed with rice, onions, paprika and other spices. Here we were also introduced to clara con limon, a refreshing summer drink that’s a mix of half beer, half lemon soda. (San Miguel Beer is sold widely in Spain, but while it has a similar logo as our local SMB and the Spanish company used to be a subsidiary of the Philippine brewery, they’re now completely unrelated.)

6. La Rioja wine. Spain’s smallest region is world-famous for its wines. It uses predominantly the tempranillo grapes, and the aging process takes after that in Bordeaux. A nice Rioja wine can be had for a mere 8 euros.

In the city of Logroño is Viena Pasteleria, where the owner’s pastry chef-brother is award-winning; it sells fine truffles that incorporate the region’s olive oils and wines.

7. Boffard cheese in Fromista. The capital of Palencia makes the famous Boffard cheese, said to be the favorite of the Spanish monarch. 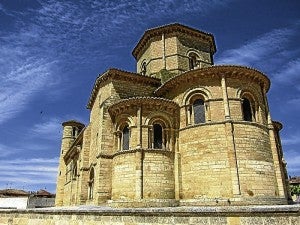 8. Pilgrim’s menu at Meson Los Templarios. In the sleepy town of Villarcazar de Sirga, partake of a traditional pilgrim’s menu that features local cheeses, wines, chorizo and, the piece de resistance, lechazo churro, roasted milk-fed baby lamb. It’s a bit appalling to know you’re about to devour an animal that has lived only a few weeks, but one bite of its soft, succulent meat and your baser instincts take over. The best lamb we’ve had bar none.

9. Catedral de Leon. The people of Burgos claim to have the best cathedral in Castilla y Leon. The citizens of Leon beg to differ. The Leon cathedral’s most distinct feature are its stained-glass windows and ceilings. Restoration of the stained glass began 15 years ago, and still ongoing, the first time the windows were touched in a century.

At night, the cathedral is lit from the inside to make you better appreciate the stained glass. It was built in the 13th century but wasn’t completed until the 19th century.

10. Samos Monastery. Very “The Name of the Rose” in feel, the frescoes in this Benedictine monastery’s cloisters are a sight to behold. One panel depicts a poignant scene between St. Benedict and his sister, St. Scholastica, on the eve of her passing.

11. The botafumeiro in Catedral de Santiago de Compostela.  The giant incense burner is a tourist draw here. Apart from its metaphorical symbol for spiritual cleansing, botafumeiros were traditionally used to deodorize the cathedral against the odors of the unwashed pilgrims.

In Santiago, the butafumeiro is lit only after the noon Mass, though a guide told us the cathedral may do it at other times with an indulgence of 300 euros. Several men are tasked to swing the massive burner at 60 kph. The spectacle earns applause from the faithful.

12. Pulpo à la gallega and tetilla cheese. You don’t leave Galicia without partaking of pulpo à la gallega; the region is the origin of the famous octopus dish, boiled and sliced thinly then drizzled with olive oil, and sprinkled with paprika and salt. Only a few kilometers from the shore, Galicia has outstanding seafood.

The dome-shaped tetilla cheese, meanwhile, is creamy and delicious with an interesting story behind it. It’s said that Galicians began making the cheese to protest the move by the church to cosmetically reduce the breasts of a female sculpture in the cathedral; the male sculpture across it was said to have been grinning because of it.