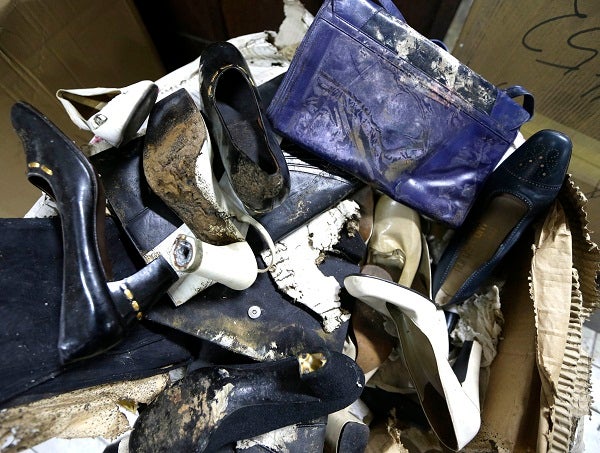 Branded high heel shoes, once worn by flamboyant former first lady Imelda Marcos, sit among equally-damaged shoes and bags in a section of the National Museum in Manila. AP

MANILA, Philippines—A Malacañang official has said that a legendary collection of shoes and other possessions left behind by former first lady Imelda Marcos and her dictator husband when they were ousted by a 1986 “people power” revolt have no historical significance, except for some gowns.

Communications Undersecretary Manolo Quezon issued the statement after National Museum officials acknowledged that the collection of Marcos’ clothes and shoes had been neglected for more than two decades and some had been damaged by a monsoon storm last month.

Museum officials told The Associated Press on Sunday that termites, storms and neglect damaged part of Mrs. Marcos’ collection of at least 1,220 pairs of shoes and other items while they were stored from 1986 to 2010 at the Malacañan Palace and later at the National Museum in Manila.

More than 150 cartons of clothes, dress accessories and shoes were transferred to the National Museum for safekeeping two years ago from the riverside palace. They deteriorated further at the museum after the boxes were stored in a padlocked room that was inundated by heavy rains last month because of a leak in the ceiling, museum officials said.

Quezon said the contents of the boxes have “no historical significance except some of the clothes” made by prominent Filipino couturiers. Museum officials said the Philippine ternos might be displayed in public, but they were wary because of the “politically sensitive nature of their provenance.”

A Filipino historian, Michael Xiao Chua, said the Marcos items are important and should have been displayed to remind current and future generations of Marcos’ dictatorial rule and encourage them to safeguard the country’s democracy.

The damaged items include native see-through barong shirts, which Marcos often wore in public ceremonies during his 20-year rule. AP journalists saw a barong shirt with a presidential seal on top of a box of 100 shirts which had reddish stains and a sleeve that was nearly torn off.

The Marcoses fled the Philippines at the climax of an army-backed “people power” revolt which became a harbinger of change in authoritarian regimes worldwide. Mr. Marcos died in exile in Hawaii in 1989 and his widow and children returned home years later.

They left staggering amounts of personal belongings, clothes and art objects at the palace, including Imelda Marcos’ shoes which have come to symbolize her extravagance amid crushing poverty in the Southeast Asian country.

Ferdinand Marcos’ successor, democracy icon Corazon Aquino, accused him of stealing billions of dollars during his rule and ordered many of his assets seized.

Aquino had Imelda Marcos’ shoes displayed at the presidential palace. They were removed from public view and stored in the palace basement when Aquino stepped down in 1992. About 800 pairs were loaned in 2001 to a shoe museum which has since become a tourist attraction.