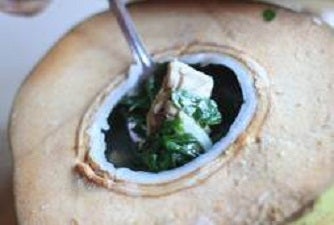 Be it sunny or rainy, the chicken binakol of Port Seafood restaurant satisfies with its rustic, lightly sweet coconut taste.

As hardworking as they are hospitable, locals welcomed the Sooo Pinoy team with open arms and kitchens as they began the second leg of the nationwide food trip in Cebu. Foodies/members of the media traversed around the region¾from the capital city of Cebu to neighboring Mandaue City and Mactan Island¾to discover the best of what the oldest recognized city in the country has to offer.

A total of 16 restaurants and over 40 dishes were set to be conquered, and so the Sooo Pinoy team gamely embarked on a culinary journey that took their appetites to seaside grills, cantina-inspired eateries and even five-star hotel restaurants, all in the name of Filipino food appreciation.

Reflecting the wonders of the surrounding waters, seafood is a primary element in most Cebuano meals. Living in a coastal province, locals take pride in getting the freshest catch, whether it’s fish, crustaceans and everything in between.

Manna SuTuKil’s dizzying array of fresh seafood is best appreciated through the Mactan cooking trifecta: sugba (grilled), tula (boiled in broth), and kilawin (marinated in vinegar). The bounty of seaside fare such as sinugba nga molmol, tinula nga molmol, and kinilaw nga tangigue did not appear to overwhelm, but instead left the Sooo Pinoy team wanting more.

Satiating their desire for more marine eats was the pescador served at the Golden Prince Suites’ Prince Fusion Gourmet. The fried, lightly toasted lapu-lapu fish was given a gourmet makeover with a slathering of a sweet and sour sauce and sprinkling of peas, tomatoes, carrots and pineapple tidbits.

Meanwhile, Fiji Restaurant in the scenic Plantation Bay Resort, which offers breathtaking views and flavors of the island, presented their take on spaghetti al nero. The rich-tasting black pasta is handmade and incorporated with squid ink, made even more delectable with the generous addition of squid, mussels, and pepperoncino.

Squid takes the spotlight once again in one of AA BBQ’s bestsellers, the crispy hot squid dish. What is essentially calamari is updated with a touch of green chili, black pepper and onions, creating the right amount of spiciness and tenderness.

Given the laidback nature of Cebuanos, the region’s popular dishes have that characteristically organic and authentic appeal.

The chicken binakol at Port Seafood Restaurant, served up in young coconut shells, is a summery treat in that it can be relished either as juice or soup. The juicy chicken chunks combined with mild spices, coconut juices and coconut meat that can be scraped up make for one hearty dish.

Another crowd favorite is the grilled meat and seafood platter at Hotel Elizabeth’s Flora Café, which goes eat-all-you-can for only P555 every Fridays, reflecting the Cebuanos’ value for money mindset. The Filipino-style barbecue sauce work exceptionally well in bringing out the smoky medley of flavors and textures from the beef, pork ribs, chicken leg quarter, sausage, squid and blue marlin.

The second leg of the Sooo Pinoy Food Trip in Cebu took place over the course of a three-day gastronomic adventure. Truly, Cebuano culture is best experienced and understood from a culinary perspective.

More Sooo Pinoy dishes will be discovered and sampled as the Food Trip na Pilipinas tour travels in more cities and provinces around the country this year. The Sooo Pinoy campaign is launched by UFS to help promote Filipino pride by spreading the love for Filipino cuisine. Like the Sooo Pinoy Facebook page at www.facebook.com/SoooPinoy or follow @SoooPinoy on Twitter.