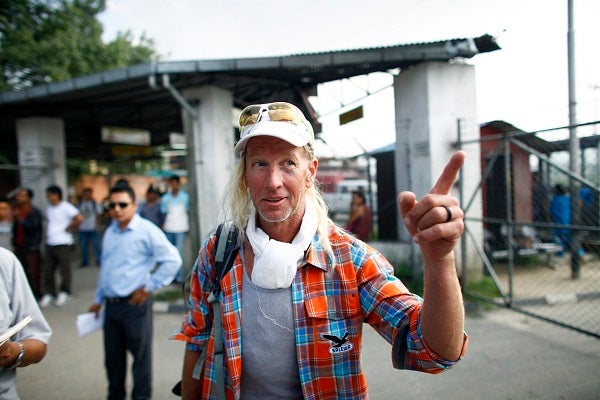 American Glen Plake, survivor of a weekend avalanche at Mount Manaslu in the Himalayas arrives at the Tribhuwan domestic airport in Katmandu, Nepal, Wednesday, September 26, 2012. Rescuers have so far brought down the bodies of eight victims, four French, one each from Germany, Italy and Spain, and a Nepali guide. The climbers killed were part of a crush of mountaineers who came to the peak in Nepal because of heightened tensions between Chinese authorities and Tibetans. AP/Niranjan Shrestha

KATMANDU, Nepal—Renowned American extreme skier Glen Plake says he feels lucky to be alive after surviving the weekend Himalayan avalanche that killed at least eight people, but he’s heartbroken that he could not save two friends.

Plake is a champion hot-dog skier who has appeared in many extreme-skiing documentaries, including 1988’s “The Blizzard of AAHHH’s,” and also is well known for the tall mohawk he wears on the slopes. He had planned to ski down Mount Manalsu, the world’s eighth-highest mountain, after reaching the summit.

“I was awake in my tent reading my Bible. … The tent began to shake. We thought it was the wind but in fact it was an avalanche,” Plake told reporters Wednesday at the Katmandu airport after returning from the mountain in a helicopter. “It was like an earthquake; it was like a tsunami.”

Though he said he is “probably the luckiest person in the world,” he was unable to find his friends and climbing companions, Remy George Lecluse and Gregory Ugo Costa, both of France.

“You are doing everything you can do because your friends’ lives depend on your next action,” he said. “Unfortunately everything I did proved to produce nothing. At that point, I had to think about my own life and start preparing.”

Lecluse, Costa and a third person are still missing from the avalanche that swept the tents on Mount Manaslu at an elevation of 7,000 meters (22,960 feet) before dawn Sunday.

Many of the survivors have returned to Katmandu, Nepal’s capital, and have abandoned their plans to climb the mountain this season.

Sunday’s avalanche came at the start of Nepal’s autumn climbing season, when the end of the monsoon rains makes weather in the high Himalayas unpredictable. Spring is a more popular mountaineering season, when hundreds of climbers crowd the peaks.

Mount Manaslu, which is 8,156 meters (26,760 feet) high, has attracted more climbers recently because it is considered one of the easier peaks to climb among the world’s tallest mountains. Avalanches are not very frequent there, but in 1972 one struck a team of climbers and killed six Koreans and 10 Nepali guides.