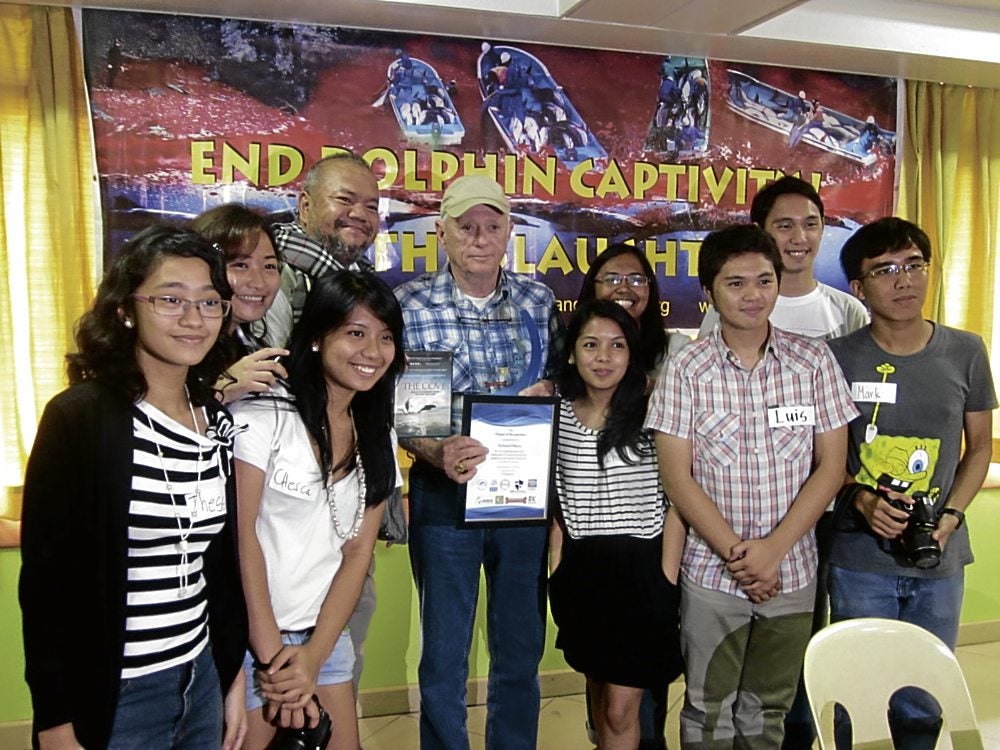 Ric O’Barry: Putting the smile back on dolphins

Adults and children alike enjoy seeing them jump meters high above water, play hoops with their snouts, and waddle their tail upright in water. With their capacity to please the crowd, dolphins may be next to humans when it comes to entertainment.

But dolphin-entertainers may have been captured through illegal means.

The 2010 Oscar Best Documentary Feature, “The Cove,” reveals the annual practice of traders in a remote and hidden cove in Taiji, Japan, of ensnaring dolphins for the worldwide market in dolphin entertainment. Dolphins who cannot be trained and which fail to make the grade are killed. The result is the annual slaughter of more than 20,000 dolphins!

Ric was in town recently to campaign against dolphin entertainment and see for himself Philippine efforts to provide sanctuaries to endangered dolphins.

In an interview with 2bU, Ric said he trained the dolphins in “Flipper” without any manual or previous knowledge of how to relay messages to dolphins.

“I would get the script that says, ‘Flipper goes over to the dock and picks up the gun and swims down left to right.’ I had to actually translate that into actions,” he said. “What struck me is that they’re smarter than we think they are.”

From being a dolphin trainer, Ric became a dolphin activist after his dolphin Kathy, who played Flipper, “committed suicide.”

“She was really depressed. She committed suicide… in my arms,” Ric said.

He explained that unlike humans, dolphins and other whales are not automatic air breathers. “Every breath they take is a conscious effort. And so, they could end their life whenever it becomes too unbearable by not taking the next breath.”

After Kathy’s death, the next day he was in jail for trying to free dolphins from a laboratory. Since then, he has been known for advocating dolphin freedom.

For the past 40 years, he has been freeing dolphins across the globe. He said the campaign has sometimes taken him away from his family.

“Sometimes I think that I have my priorities wrong, but something must be done to end these dolphin captivities,” Ric said. “When I started, I had no idea I’ll be doing this for the next 40 years of my life.”

Ric is very passionate in his advocacy because he believes he was partly responsible for dolphin captivities.

“I feel somewhat responsible because it was the ‘Flipper’ TV series that created this multi-billion-dollar industry (oceanariums),” Ric said. “It created this desire to swim and kiss dolphins. It created all these captures.”

In “The Cove,”  Ric said, “the dolphin’s smile is nature’s greatest deception. It creates the illusion that they are always happy.”

In his recent visit to the Philippines, Ric met leaders of various environmental organizations. He was amazed of the initiatives being carried out in the country.

“These guys greatly help us in solving our environmental problems,” he said. “They are the heart and soul of these campaigns. Our problems will not be solved by governments, corporations, but by individuals who volunteer and dedicate their time and energy [for environmental causes].”

Upon knowing this, Ric expressed delight and asked for a copy of the resolution, which he said could be a model for other countries.

Ric said he has been in and out of jail and has received death threats because of his campaign for dolphin freedom. Asked if there’s anything he’s afraid of, he replied no. “Not even my wife,” he added jokingly.

Now in his 70s, Ric O’Barry still has the passion of an 18-year-old activist. And his Philippine visit should show that his labors have not been in vain.

“The Cove” is available in DVD. Visit www.takepart.com/cove to find out what you can do to end dolphin captivity.