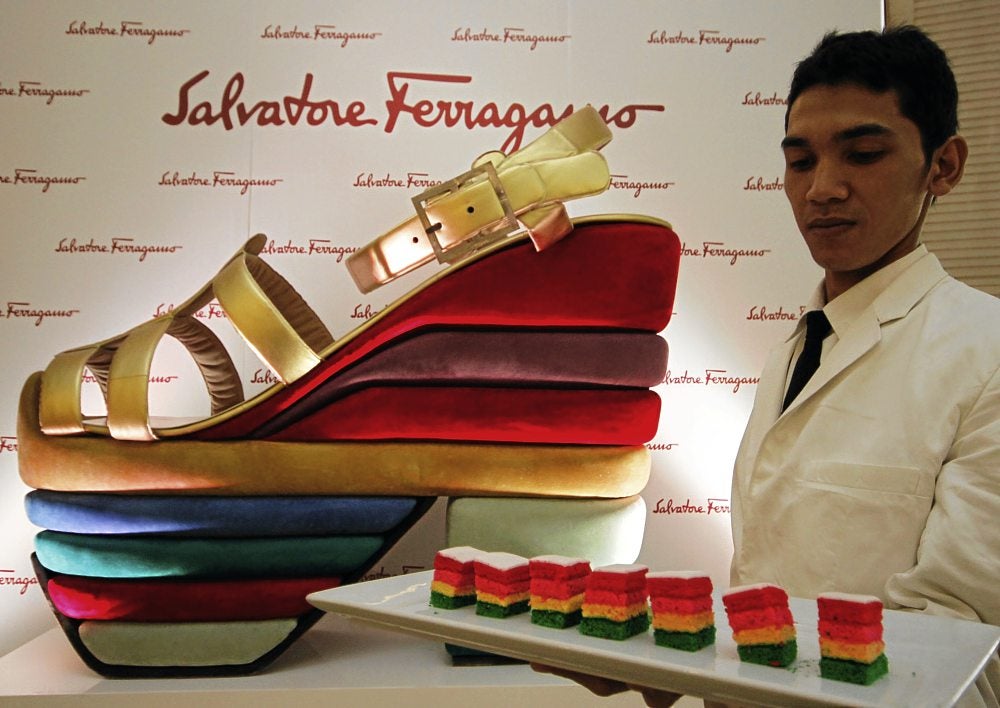 Ferragamo cobbler shows craft (no, he hasn’t swallowed a nail)

Has he ever swallowed a nail by accident?

It wasn’t an insolent question, as those present were truly interested—some were amused, others openly flinched—as the man on the ersatz work table hammered tiny nails to join a wooden shoe last and an insole, with a few spare nails wedged between his pursed lips.

Caterina Trisoglio, the Hong Kong-based regional marketing manager of Salvatore Ferragamo, who was acting as translator, furrowed her brows, but smiled at the audacity of the question. After all, the man introduced only as Giuliano wasn’t a daredevil stuntman, but a skilled craftsman.

Indeed, Giuliano was a curiosity at the Ferragamo boutique at Greenbelt 4 last Tuesday, as the shoemaker demonstrated the making of a pair of suede Carla pumps, one of the historic brand’s classic styles. He was flown in from the luxury house’s Florentine workshop.

Ferragamo’s Carla line is characterized by kitten heels, to differentiate it from the Varina flats and the iconic low-block-heeled Vara. Like the Vara and Varina, Carla has a grosgrain bow across the vamp with a metallic plate engraved with the namesake founder’s name.

If everything is done by hand, Giuliano said through Trisoglio, he could make two pairs a day—two pairs that would rest on their respective lasts for at least a week to dry before they can be ready for the retail floor.

“It’s like slow food or wine,” Trisoglio said. “You can’t rush it; it gets better with time.”

Still made in Italy

Ferragamo still makes all its footwear in Italy, in company-owned factories, or outsourced in trusted workshops with longtime association with the house, Trisoglio said. A typical Carla back in Italy, however, would be made in an assembly line, where, for instance, a machine would pull at the leather or fabric to make sure it was snug in place, just as Giuliano did with the suede material of his demo pair.

A Carla may have 12-15 parts (times two), according to Giuliano, who has been with the company for 29 years. It’s composed of three layers: the piece of leather that touches your skin; a “heel counter,” a stiff piece of leather in the heel area that’s meant to give comfort and durability, and toe caps (leather soaked in water to become supple); and the upper, which can either be leather or fabric. The layers are bound using vegetable glue.

Italians are reputed to be among the best, if not the best shoemakers in the world. And Trisoglio believes this has to do with the Italian tradition of craftsmanship—generations of artisans who pass on their know-how to the next generation.

Salvatore Ferragamo himself began making shoes for Hollywood stars in the early 1920s, but chose to return to Florence in 1927 to build his company, where, as Trisoglio pointed out, they had all the shoemaking traditions and craftsmen.

Giuliano has been a cobbler for 55 years. He began fixing shoes when he was very young. By age 12, he had made his first shoe. He and his older brother, from whom he learned his craft, set up their own workshop when Giuliano was 18. They are six brothers in all; all became shoemakers.

According to the shoemaker, Asians typically have shorter and wider feet compared to North Americans, whose feet are longer and narrower.

Shoes make up 65 percent of Ferragamo’s business in the Philippines, according to Gina S. Bonoan, merchandise group manager of Stores Specialists Inc., exclusive Philippine distributor of the brand. When it introduced its Red Carpet made-to-order shoes for women last December, Bonoan said it was such a hit with local customers that it will soon be also bringing in the Tramezza, the bespoke shoe service for men.

Apart from the Greenbelt outpost, the brand is also sold at Power Plant Mall, Alabang Town Center; and Rustan’s in Makati, Mandaluyong and Ayala Cebu.

“They used to say that Ferragamo is the brand of our grandmothers,” Bonoan said. “That’s not true anymore. As you can see, our styles have evolved.”

Giuliano’s shoemaking demo, the exhibit of a replica of a rainbow-colored wedge shoe, originally designed for Judy Garland in 1938, at Greenbelt 4 (ongoing until this weekend), and the selling event that happened on Tuesday night are all part of Ferragamo’s celebration of 80-plus years of shoemaking.