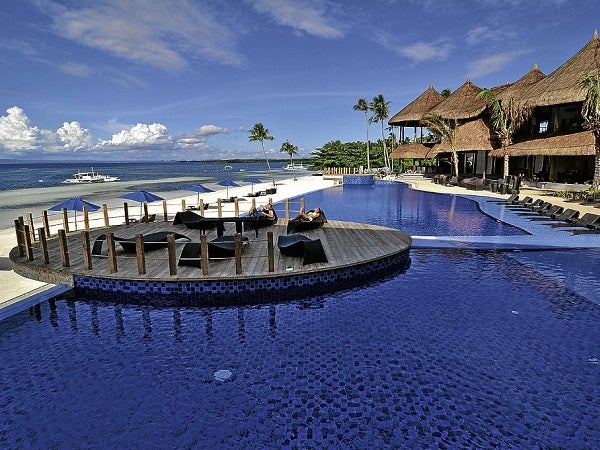 Beauty and miracles in Bohol

The trouble with staying in great hotels is getting so used to the treatment that you start expecting more of it at home.

I recently arrived from one such resort in Bohol, and upon disembarking from the tricycle with my bag of wooden back scratchers and whatnots, I was confused not to find my entire family lined up outside my front door, holding up welcome drinks and a stack of neatly rolled hot towels. Instead, my welcoming committee was made up of three disdainful cats and a room full of cat hair.

Sadly, the Bellevue Resort in Bohol did such a great job of jubilantly yielding to my every request that my living standards at home have now increased a thousandfold.

For example, I now expect, at the very least, to have a say in what part of my bed I am allowed to occupy. I tried establishing this newfound resolve last night, but my dog just rolled his eyes and pushed me off my pillow.

At noon, I emerged from my room in pajamas, expecting the usual spread of lamb, cakes, and rock lobster for lunch. I was horrified to find only a tiny slab of cold fat on the kitchen table, submerged and rather sad in a bowl of soup.

Nevertheless, my stay in the resort garnered me enough tranquility points to last an entire month, so I consumed the fat in serene spirits. The capital place I had found myself cocooned in for a good 48 hours is located some 30 minutes away from the Tagbilaran airport, a huge luxury resort that opens to an enormous view of the sea, dotted only by wooden boats and barefoot children, cheerfully free from the fuss of technology and the Web.

It was low tide and gloomy when we arrived, so I occupied myself with negotiating the beach front: white sand, massive clouds, kilometers of nice, warm water you can tread on.

I made my way to a group of children as a tour operator made his way towards me. He showed me a laminated card of activities: Loboc River Cruise, Mag-aso Falls, Country Side Tour, Chocolate Hills, Dolphin Watching, some adventure courses of sort, and so on, with prices mostly negotiable.

Mr. Tour Operator Man seemed nice but was soon enough befuddled with my queries: What dolphin species are out there? Why do they like hanging around here? Do they feel sort of annoyed when boatfuls of screeching tourists chase after them? Are the tours regulated?

To the last couple of questions he said no, tours were not regulated, and no, the dolphins did not seem annoyed. In fact, they seem to enjoy riding along the boats’ bow waves. The children spotted me then and gathered round, speaking in Boholano and English. For some reason they wanted to know if I had any chocolate, which unfortunately, I didn’t.

I somehow managed to part with my beddings the next day to join Suzette, Ed, Eugene, and Jehn for a ride to the city. We visited the centuries-old Dauis Church, a formidable structure of limestone and egg whites and colors and imagery and patterns and depth and pillars and altars and an unbelievable mural on the ceiling.

The unbelievable mural was painted by Cebuano artist Raymundo Francia, the church’s Sacristan Mayor, Dodong Adaptar, told me, and I snapped out of my trance.

Mr. Adaptar then showed me the church’s miraculous well, where fresh water flowed infinitely from nobody knew where. Strange, he mentioned, because the church is surrounded only by salty seawater.

Our helpful guide from Bellevue, meanwhile, volunteered that the church’s Virgin Mary statue was once found with grass blades clinging to its dress, as if one night it just decided to climb down its pedestal to take a leisurely stroll outside.

But really, just how the church can be held together by corals and raw egg and still be standing, after an entire century, is incomprehensible enough for me.

Outside the church, a group of old women sat on a log, dogs by their feet, the sun sinking behind them. They cackled happily and wisely in their local tongue, their voices overlapping and conspiratorial. I managed to catch snatches, which sounded something like “Lahi na ang mga bata karon.” I understood this to mean: “The youth, they are different now.”

Later that night, we all gathered at Bellevue’s outdoor restaurant for our final feast. The wind was soothing, fire dancers whirled around us, and Chef Tony, as per usual, manifested with his plates of bolognaise, puttanesca, and carbonara, just when my gut was three seconds away from bursting. I could never say no to his creations, though. They were scrumptious. Plus, his Italian accent is hypnotic.

Before drifting off to sleep on that final, magical night, images of Bohol’s beautiful landscapes merged with dreamy images of the resort. There was Leonida the masseuse, who knew where exactly on my weary, mortal joints to dig her palms into; Mr. Captain Waiter at the Lamian restaurant, who boldly filled and refilled my glass with soothing calamansi juice after finding out that my entire being was cloaked in influenza; the cute chef behind the breakfast buffet line, who made his eggs over-easy seem very easy, which is not actually that easy as hundreds of attempts have taught me; and Chef Martin, who on our very first day materialized at our table to crack open coconut shells with a huge and mighty bolo, to reveal  perfect, milky-moist rice within. “How did you do that,” we gasped. “It’s a secret,” he answered, mysterious and all.

In this dream-like state, I reached out to grab a bottle of water on my nightstand, and glugged down half its contents. It was cold, sweet, and strange. It was only when I put the cap back on did I realize I was holding a bottle of miraculous water from the Dauis Church.

As I slept, I swear I felt my chest begin to expel the influenza.

The Bellevue Resort, located at the Doljo Beach, is Bohol’s only five-star luxury resort. It is managed by the same group behind The Bellevue Manila and B Hotel. Log on to http://www.thebellevue.com/bohol or call tel. +632-7718181 for more details.