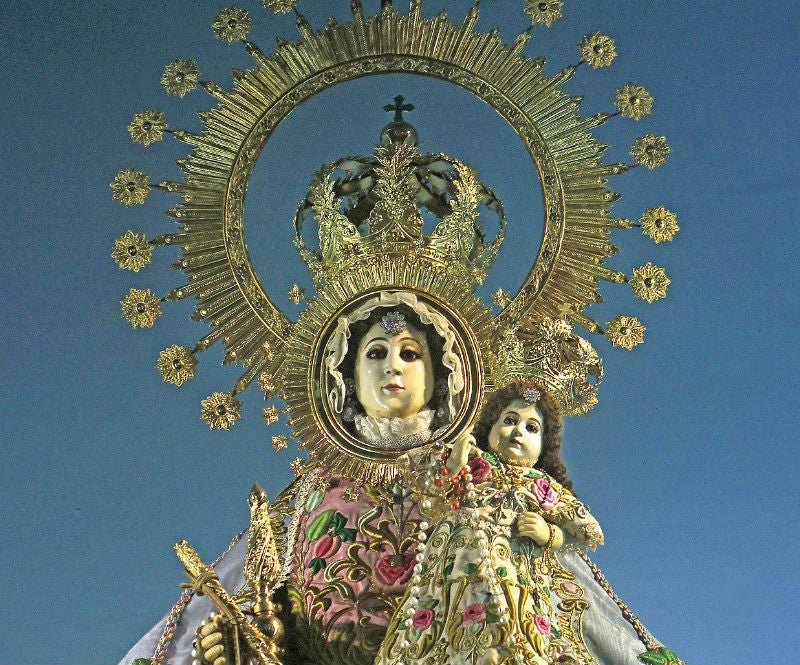 The Baronial structure, with its mix of modern and Gothic architecture, never fails to attract attention and reverence.

Rightly so, for behind Sto. Domingo Church’s facade of intricately carved panels and stained glass windows lie a treasure trove of the Philippines’ rich cultural heritage and the object of centuries-old devotion, the image of Our Lady of the Rosary of La Naval, the oldest Marian icon in the country.

The La Naval image has been the object of Filipino devotion that dates back to the 16th century, and the icon’s shrine in Quezon City is host to an annual feast that culminates in a procession that draws tens of thousands of devotees.

On Oct. 4, ahead of the feast and coinciding with the traditional enthronement of La Naval, the National Museum will declare Sto. Domingo Church and all its liturgical objects National Cultural Treasures, the highest distinction the government can confer on a cultural property.

The declaration follows Republic Act No. 4846, otherwise known as the Cultural Properties Preservation and Protection Act, which defines “national cultural treasure” as a “unique cultural property found locally, possessing outstanding historical, cultural, artistic and/or scientific value which is highly significant and important to the country and nation.”

The rare distinction will help Sto. Domingo’s caretakers, the Dominicans, in the preservation and restoration of the church, according to Fr. Guiseppe-Pietro Arsciwals, prior of the Convent of Santo Domingo.

“Funding for preservation and restoration will be more accessible and the government will also grant the church protection in times of calamities and war,” said Fr. Gaspar Sigaya, archivist of the Philippine Dominican Province.

Asking the National Museum to declare the church and its attached entities as cultural treasures was Sigaya’s idea, and he did so in August last year.

To support its application, the convent submitted documents, including a comprehensive coffee-table book titled “The Saga of La Naval: Triumph of a People’s Faith,” which covered the history and the relevance of Marian devotion to the Filipino faith and culture.

The book, edited by Inquirer editor Lito Zulueta, was published by the Dominican Province of the Philippines in 2007 to mark the centennial of the canonical coronation of La Naval, Arsciwals said.

In response, a team from the museum visited the church earlier this year to see if its merits entitled it to become one of the country’s national cultural treasures.

Besides their history, the church and the La Naval image have very compelling reasons to get the National Museum’s approval, among them their standing as silent witnesses to riveting, recent events in Philippine history.

Sto. Domingo Church served as the venue for the wake of opposition leader Benigno “Ninoy” Aquino Jr., who was assassinated in 1983, while the Marian icon, carried by the Dominican priests, gave encouragement to the people during the bloodless Edsa People Power Revolution that toppled the dictator Ferdinand Marcos in February 1986.

The 58-year-old church on Quezon Avenue in Quezon City—originally located for four centuries in the old Intramuros in Manila—has also been widely noted for its modern architecture and design by the late José María Zaragoza.

“It is the only church that have no columns in the middle so you will have a clear vision of it [inside],” Arsciwals said in an interview with the Inquirer on Friday.

In his piece in “The Saga of La Naval,” architect and University of Santo Tomas professor Manuel Maximo Lopez del Castillo-Noche described Sto. Domingo as “reminiscent of mission-style architecture, with a fusion of Romanesque articulation and Gothic verticality.”

Adding more value to the church are the eight murals by National Artist Carlos “Botong” Francisco, mounted on the copula, depicting important events in the life of its patron, St. Dominic de Guzman, and the vivid stained-glass windows rendered by Filipino artist Galo Ocampo.

On the choir loft, a 76-year-old pipe organ made in Rosaryhill in Hong Kong is being restored to its grandeur by Diego Cera Organbuilders Inc., custodians of the world-famous Las Piñas bamboo organ.

Somewhere in the vast church complex is a secret vault holding centuries-old ivory icons and wooden images of saints made by Filipino craftsmen; exquisite, gem-studded, age-old crowns; golden Marian robes; and fine jewelry for the Virgin presented by fervent devotees.

The secrecy about the vault makes sense: In October 1762, thieves broke into the Sto. Domingo Church in Intramuros and took some of its rare treasures.

Arsciwals referred the Inquirer to “The Saga of La Naval” for a list and photos of the church’s treasures. The list of jewelry presented by devotees to the Virgin Mary runs for four pages. Among the devotees were members of old, rich families in the country, including the Roxases, Quezons and Madrigals.

In the jewelry collection is a locket, described in the La Naval book as “studded with small diamonds, seed pearls and colored gems.” It is believed to have been offered to the Virgin by a certain Ana Rojas, a native of Calumpit, Bulacan, in the 19th century.

Another notable gift is the National Artist medallion, which ardent devotee Nick Joaquin instructed his heirs to donate to the La Naval Virgin before he died in 2004. The medallion has been affixed to the statue’s foot since then.

Stored in the vault, according to the book, are prewar ivory heads and hands for statues of several saints, including St. Dominic, St. Vincent Ferrer, St. Catherine de Ricci, St. Agnes of Montepulciano and St. Antoninus of Florence.

The Sto. Domingo Museum houses other valuable objects—such as centuries-old crucifixes made of gold and silver, rosaries and a tabernacle, all of which had been used in the old Sto. Domingo Church in Intramuros, according to Arsciwals.

The original, Gothic church in Intramuros was built on a piece of land bought by Manila Bishop Domingo de Salazar in 1587. Upon its completion in 1588, a wooden image of La Naval from Mexico was enshrined there and it would stay there for 300 years.

The church was relocated to Quezon City and inaugurated in 1954 after the fifth Sto. Domingo Church in Intramuros was destroyed in the Battle of Manila in 1945.

But the focal point of the extraordinary distinction from the National Museum. Arsciwals said, is the storied image of La Naval, which was carved from ivory by a Chinese artisan commissioned by Governor General Luis Perez Dasmariñas in the 1590s.

“This is the first ivory image carved in the Philippines; that’s why it is very historic,” Arsciwals said.

With a controversy involving illegal ivory trade in the Philippines making the headlines, Arsciwals quickly added that all ivory icons in the church had been in existence long before the Convention on International Trade in Endangered Species of Fauna and Flora (CITES) imposed a ban on international trade in ivory in 1981.

The devotion to La Naval flourished after she was believed to have helped the ill-equipped Filipino and Spanish armada repel the Dutch invasion of Manila in 1646.

“The Virgin Mary is significant to the Filipino culture because, in the middle of all uncertainties, there is something that you’re holding on to and that is faith in God, as what she showed in her life,” Arsciwals said.