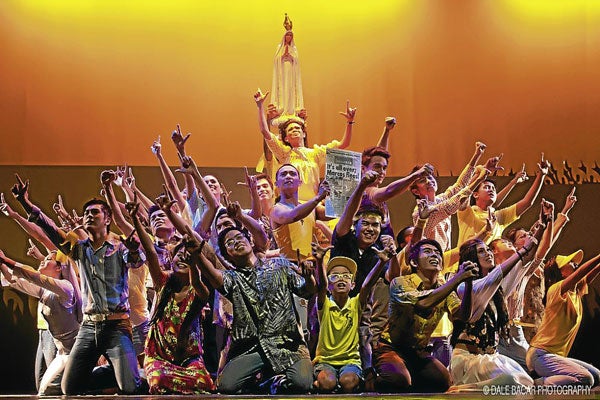 One more hurrah for Cory Aquino 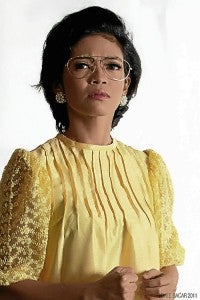 As the story of our iconic Corazon C. Aquino unfolds on the stage of St. Scholastica’s College in Manila— with her rise and apotheosis—we are confronted by parallel stories of fictional characters whose lives were touched by Cory.

There is Peter (Vince Tañada), an aggressive TV reporter who marries and abandons Elsie (one of the Comelec tabulators who protested the cheating in the 1986 snap elections, played by Adelle Ibarrientos-Lim) after he is diagnosed with Parkinson’s disease.

We also have Jason (Alex Dorola) who, in an act of supreme—if not incredible—sacrifice, donates his eyes to the woman he loves, the blind folk singer Anette (Monique Azerreda).

And there’s the boy named Edsa (Gabby Bautista), unaware of who his real parents are.

The recent occasion was the press launch and preview of the Philippine Stagers Foundation’s new musical, “Cory ng Edsa,” a sequel to the award-winning “Ako si Ninoy,” which has chalked up 360 performances across the country.

The foundation, headed by lawyer Vincent M. Tañada (yes, the same guy who plays Peter), is said to be the only theater company which keeps its actors on a monthly salary.

“Cory ng Edsa” was written and directed by the versatile Tañada, with music by Pipo Cifra and choreography by John San Antonio. Cindy Liper plays Cory.

The press launch-preview called attention to the fact that the play is now available for bookings ([email protected]; tel. 781-6727) here in Metro Manila and in the provinces.

“Cory ng Edsa” is filled with musical and dance numbers (performed with brio by the ensemble) which help maintain audience interest in a rather long play without intermission.

The play, heightened by footage, opens with the assassination of Ninoy Aquino as the people run around, frightened and confused (“Sino yon? Ninoy? Siya ba ’yon? Ninakawan ng buhay!”)

Then follows a dramatization, often in song and dance, with snatches of humor, of familiar historical events: Ninoy lying in state at the Aquino residence on Times Street; demonstrations; gradual buildup to the snap elections, the cheating and the walkout at the Comelec, Edsa I, Cory as President, gracefully stepping down once her term was over, and finally succumbing to cancer.

The play is all of two hours and 40 minutes, and there is need for editing here.

Interspersed with the political events are the personal dramas of the different characters. As these unravel, there are just too many heart-tugging and tear-jerking moments, as in a teleserye.

By and large, however, “Cory ng Edsa” is a stirring production if your political heart is in the right place. It is polished, professional, and effective as presented.

We need sociopolitical musical plays like these, to complement the works of the national theater companies like Tanghalang Pilipino, Peta (Philippine Educational Theater Association) and Gantimapala Theater Foundation.