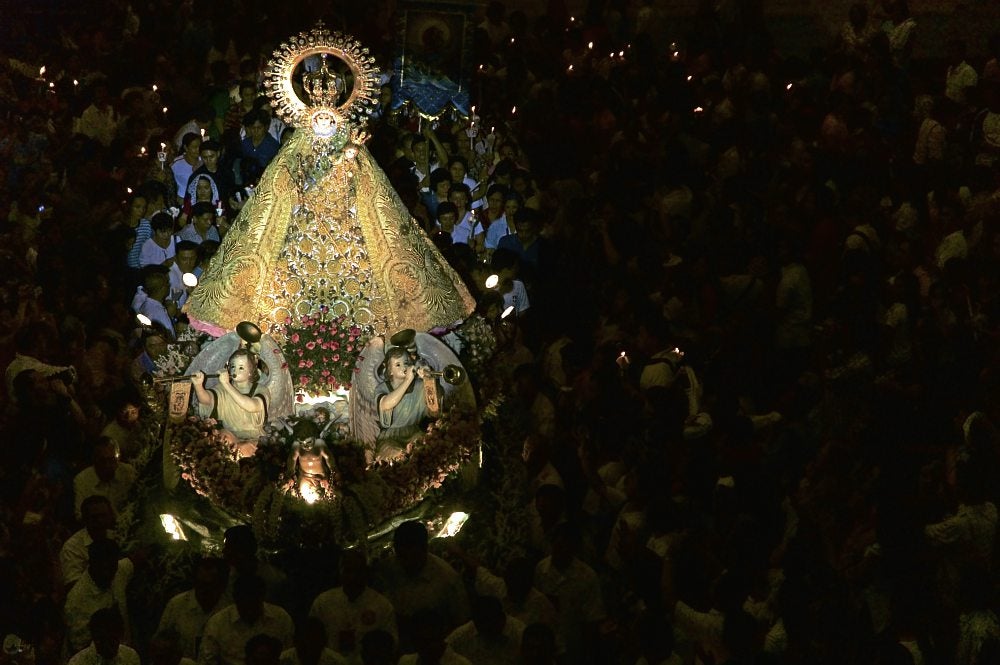 The Philippine government, through the National Museum, will declare this week the Santo Domingo Church, with its Shrine of Our Lady of the Rosary-La Naval de Manila, in Quezon City as a National Cultural Treasure.

The declaration, according to the National Museum, recognizes Santo Domingo-La Naval both as an institution and a structure, as well as a repository of modern art.

The declaration will be formally announced on Oct. 4 at 5 p.m. during the traditional enthronement of Nuestra Señora del Santisimo Rosario, La Naval de Manila, to be led by shrine rector Fr. Giuseppe Arciwals, OP. To formally accept the declaration is Fr. Gert Timoner, OP, the prior provincial of the Philippine Dominican Province.

October is the Rosary Month on the Catholic calendar. It is devoted to the Blessed Mother under the title Our Lady of the Rosary in reference to the Rosary devotion promoted by the Dominicans, one of the most influential religious orders in the history of the Church.

The Dominicans were among the pioneer missionaries who effectively evangelized the Philippines to make it the biggest Christian nation in Asia and the third largest Catholic country in the world.

La Naval de Manila refers to the naval battles in the 17th century between the invading Dutch armada and the poorly equipped Spanish and Filipino defenders.

The defenders prayed desperately to the Santo Rosario lodged in the church, then in Intramuros. When they won, they attributed their victory to the intercession of the Blessed Mother.

The feast of La Naval has been celebrated with much pomp and pageantry since National Artist for Literature Nick Joaquin called it the biggest Marian celebration in Intramuros.

José Rizal prayed at Santo Domingo, a splendid Gothic church at that time, and the shrine of La Naval before going to Spain to continue his studies in the 19th century.

In 1941, the Gothic structure was destroyed at the outbreak of World War II. But the Dominicans had kept the ivory icon in the Santo Domingo vault, where it was protected from Japanese bombs.

They transferred the icon to their Santissimo Rosario Church at the University of Santo Tomas (UST), which had been made an internment camp by the Japanese.

After the war, the Dominicans rebuilt the church in Quezon City. In a spectacular procession, they brought the icon of La Naval to the new church in 1957.

The National Museum declaration recognizes both the towering edifice in Sta. Mesa Heights, Quezon City, and the exquisite ivory image of La Naval with the Infant Jesus as cultural treasures of the nation.

In an interview, Fr. Gaspar Sigaya, OP, head of the Dominican Province of the Philippines heritage board, explained that the government’s declaration would have certain implications on the status of the church.

“Now the government will have the right to intervene in matters of administering the physical composition of the church compound,” the Dominican priest said.

“However, we must maintain that the declaration does not equate to a transfer of ownership. The government’s primary role is to assure the preservation of the historical and cultural identity of the institution.”

In effect, Sigaya said, the declaration of Santo Domingo subjects the structure under the provisions of Republic Act No. 4846 or The Cultural Properties Preservation and Protection Act, which defines a national cultural treasure as “a unique cultural property found locally, possessing outstanding historical, cultural, artistic and/or scientific value which is highly significant and important to the country of the nation.”

Sigaya, also the official archivist of the Filipino Dominicans, said the declaration would afford the church assured assistance from the government.

“Santo Domingo will have the benefit of priority government funding for the structure’s preservation, protection and restoration; incentive for private support; and as a national treasure, it will be given top priority protection in times of calamities, even in war,” he said.

Sigaya added that the declaration did not only cover the church, it included as well the whole Santo Domingo Compound.

The Santo Domingo Church is a complex that includes the mother house of the Filipino Dominicans, It is the nerve center of Dominican activities in the archipelago and, since Filipino Dominicans have been sent as missionaries to Sri Lanka, Guam, Ethiopia and elsewhere, in the world.

The miraculous image of La Naval was created in the earlier half of the 17th century by a heathen Chinese, who eventually was converted to the faith. After its creation, a Spanish governor-general gifted the image to the Dominicans.

But what made the sacred image famous were the miraculous victories of the Filipino-Spanish forces against the invading Dutch armada.

The Philippines was still recovering then from a great earthquake the previous year. The only ships available for the defense of the islands were trade ships, the galleons. The galleons were outfitted as war ships and renamed Rosario and Encarnacion.

As historical accounts would tell, the only powerful weapon the defenders had were their faith and their pledge to Our Lady of the Rosary to walk barefoot to her shrine should they obtain victory against the Dutch.

After the battles, the triumphant defenders made good their pledge.

Joaquin said if the Calvinist Dutch had won, then the country would have become Protestant or even Muslim, since Dutch evangelization of Malaysia and Indonesia did not wrest those countries from the Muslims.

The Spanish-Filipino triumph in the five naval battles of 1646 has since been commemorated every October. This year the grand La Naval procession will be on Oct. 14.

Measuring 85 meters in length, 40 meters in width and 25 meters in height, with a total floor area of 3,300 sq m, Santo Domingo Church is the biggest in Metro Manila and one of the biggest churches in Asia.

The massive church is a unique blend of Spanish colonial and modern architecture.

It was designed by José Ma. Zaragoza, who was still a student of architecture at UST when the Dominicans commissioned him to design the church.

Unlike the huge Baroque churches of the Hispanic period, the Santo Domingo is modern. But it follows the Mission-style architecture—with shades of Romanesque and Gothic designs—which welcomes more space.

Aside from being an architectural jewel, the Santo Domingo Church houses artistic treasures.

In the nave are eight colorful murals by National Artist Carlos “Botong” Francisco depicting the life and times of Santo Domingo de Guzman, the Spaniard who founded the Order of Preachers, whose members are now called Dominicans. Legend has it that it is to Saint Dominic that Our Lady gave the Rosary for the Dominicans to promote.

Francisco’s murals are just below the equally brilliant murals of the Four Evangelists in vivid brown tones by Vicente Garcia Llamas.

Meanwhile, arched windows of the church frame masterful stained-glass designs by Galo Ocampo. The windows depict the original 15 Stations of the Holy Rosary as well as the Battle of Lepanto and La Naval de Manila; and the martyrdoms of San Vicente Liem de la Paz and San Francisco Capillas, Dominican protomartyrs of Vietnam and China, respectively.

Outside, on the façade, is the giant bas-relief of Santo Domingo by the Italian sculptor and expatriate Francesco Monti. On top of the portal of the church is another bas-relief by Monti, powerfully depicting the battles of La Naval.

Francisco, Llamas, Ocampo and Monti were faculty members at that time of the College of Architecture and Fine Arts of UST.

In the giant choir loft is the 76-year-old pipe organ made by Fr. Gregorio Hontomin, OP. It is undergoing restoration.

The panel of experts which had recommended the government declaration included architect and architecture historian Manuel Noche of the Heritage Conservation Society; engineer Orlando Abinion of the National Museum; and Fr. Milan Ted Torralba of the Catholic Bishops’ Conference of the Philippines–Permanent Committee for the Cultural Heritage of the Church.