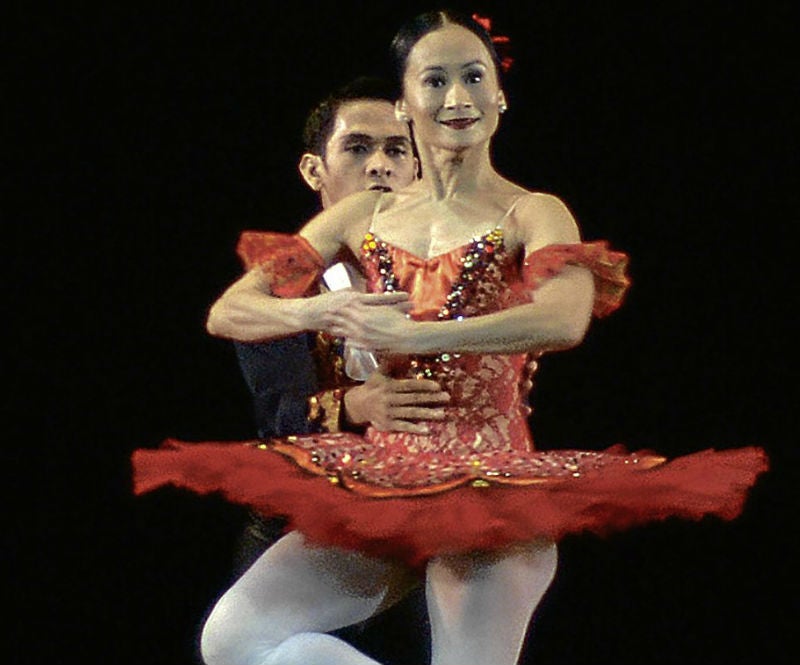 In a perfect world, ballet performances would always be presented to live orchestral music. This fusion of music and dance makes going to the theater not just a rewarding experience but a truly enlightening one.

That is why when the curtain rises on the gala night of Ballet Manila’s production of “Don Quixote” on Oct. 5 at Aliw Theater, it would be a truly memorable occasion: Not only would it be Lisa Macuja-Elizalde’s last two performances of Kitri (the other one being on Oct. 7, also at Aliw Theater), the presentation would have live orchestral accompaniment.

Macuja-Elizalde says she has always wanted to bring live music to performances of Ballet Manila, but the logistics involved in planning such a show made their staging a rarity. Only one hall in the country is suitable for a ballet production with live orchestral accompaniment: the Main Theater of the Cultural Center of the Philippines.

The dance company has mounted only two shows with live orchestral music, a Tchaikovsky program and last March’s “The Legends and the Classics,” both staged at the CCP. Macuja-Elizalde admits the cost of renting the hall and hiring the orchestra to play the music is prohibitive.

That’s why when she conceived the program for the second year of her scheduled three-year farewell to her signature dance roles, she just knew she had to dance Kitri to live music, especially for the last two times.

Aliw Theater’s orchestra pit will be the biggest in the country, big enough to hold a 100-man ensemble. It is big enough for pieces that require more than the standard 60-80 players in an orchestra. If Ballet Manila has plans of staging the ballet music of Wagner’s “Tannhauser,” the pit will comfortably seat all those musicians.

Macuja-Elizalde’s “Don Quixote” is the first of three dance roles she would be bidding adieu to on the second year of her “Swan Song” series.

For her final performances in “Don Quixote,” Mikhail Martynyuk, principal dancer of the Kremlin Ballet, will partner her. The Manila Symphony Orchestra, led by guest conductor Alexander Vikulov of Mariinsky Theater, will be providing live music for performances of “Don Quixote” and “Giselle.” “Carmen” will be performed with recorded music.

Although it is easy to act Kitri—Macuja-Elizalde describes her as a naughty brat who’s full of love and life—the absurd amount of dancing required from the ballerina makes it a hard role. This is one of the reasons she is retiring the role, her signature one.

“It is a shallow role,” she admits. “You do not need to be a mature performer to do it. But you have to have the technique to dance it. You must be good at your turns and your jumps and be able to sustain the energy needed. It’s like running three marathons. It has so much dancing, a really absurd amount of dancing for any ballerina.”

Ballet Manila principal Rudy de Dios and demi-soloist Alfren Salgado will be dancing with them as Basilio.

They will be dancing with Rudy de Nishimori, who appears courtesy of Sofia Zobel Elizalde of Steps Dance Studio.

The “Swan Song” series is being presented by the Manila Broadcasting Company and co-presented by Bellarocca Island Resorts and Spa; Freeway National Artists Collectors Series; and Bank of Singapore.

Macuja-Elizalde confesses that with the improved Aliw Theater, she foresees shows that would bring together dancers, singers and musicians on one stage. She hopes one day to present Handel’s “Messiah” in this format for the Yuletide season.

“It is traditional for Filipino families to go to Star City for Christmas,” she says. “Many OFWs who are on their holiday vacation bring their kids here. Wouldn’t it be a treat to be able to go and sit down in Aliw Theater to watch Handel’s ‘Messiah’ with a choir and live orchestra?”

The construction on the orchestra pit is the first part of a four-phase program to develop Aliw Theater. Apart from the pit, more air-conditioning units have already been added to the theater. Later phases would involve improving the theater’s acoustics by soundproofing the roof and walls of the theater and the backstage area, and adding more dressing rooms.

“I am very happy with the results because the pit will also enhance the viewing experience of the people,” notes Macuja-Elizalde. “There is now a proper distance between the first rows of the audience and the performers.”

Since the orchestra pit is controlled by a hydraulic system, the pit may be raised to extend the performing area, or lowered to provide additional seats, depending on the type of performance scheduled in the theater.

Aliw Theater has served as a venue, not just for Ballet Manila shows but also for pop concerts, musicals and television specials. The smaller Star Theater, which is part of the development plan, is also being leased out for shows and a variety of corporate events.