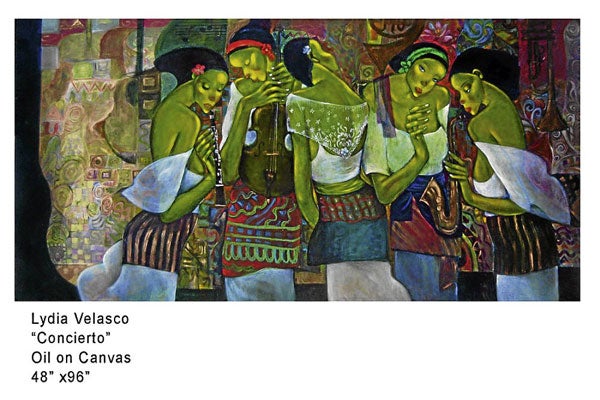 “If you want happiness for a lifetime—help the next generation.” –Chinese proverb

Salinlahi is a term coined from two native words that mean, roughly, “the transfer of racial genes.” Certainly the word possesses a keener emotional resonance than the English word generation.

“Salinlahi” is also the title of the Velasco-Cruz family’s traditional celebratory art show now on view at Galerie Anna. This show, in fact, honors their patriarch Ramon Cruz, recently departed and who, surely, would not have wanted the family to wear long, dolorous faces. Indeed, there is a time to grieve, and a time to rejoice.

First, the grandchildren, the apos, on whom Lola Lydia Velasco Cruz dotes affectionately. Trina de la Cruz, Joshua Ramon Cruz, and Bea de la Cruz, all at such a young age, unmistakably bear the artistic genes. Already their artworks seem stamped by an individual touch or style evident in specific choice of subject matter and its execution.

Lydia’s four daughters—Lon, Chie, Chigoe and Owen—are a fertile sign that the next generation of Cruzes and Velascos are assured. The fact that the four sisters grew up to become artists means that their own progeny are amply supplied with crayons and watercolors.

With the participation of Lydia’s three sisters—Daisy Carlos, Fely Velasco, and Tessie Picana—this celebratory show is positively Chekhovian, so estrogen-driven are the works, and so lush are the ornamentation and frills. The delight in their own femininity is rapturous.

Niece Arlene Felipe is in thrall to (certainly not in denial of) the marked influence of her Aunt Lydia, both in the choice of theme and the reflected penchant for the use of native ornamental designs.

Matriarch of the clan, Lydia Velasco appropriately, indeed, gallantly, tried not to steal the limelight from brood and siblings. This maternal and magnanimous gesture is indicative of the artist’s nature and character: a veritable Mother Courage where her children are concerned.

She is represented by her black-and-white drawings of nudes and her trademark Gaugin-esque women, in spontaneous strokes that limn the voluptuous womanly swellings of breasts and buttocks, whipped up so unself–consciously. Her graceful, curvilinear lines flow with the rhythm of female bodies striking a stance and attitude.

“Salinlahi” is a joyous show that proclaims: The family that paints together, stays together!