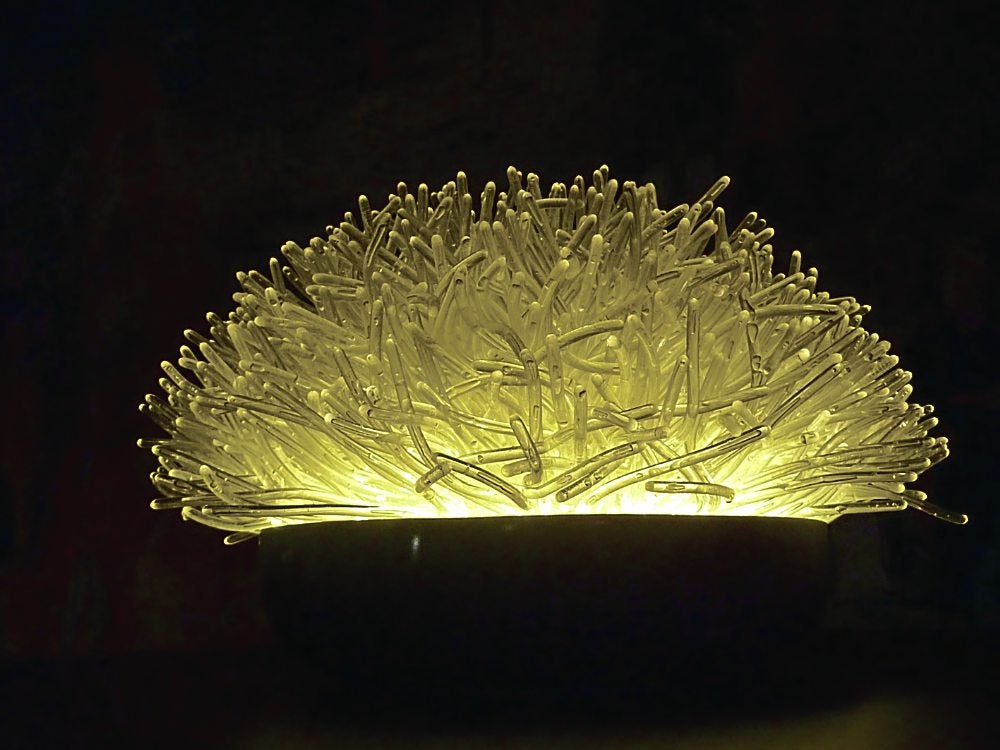 Olivia and I have known each other since kindergarten in the French School of Manila. Back then, our parents had signed us up for Madame Legal’s art class L’Atelier. Did I expect for a second that 20 years later her work would be exhibited in Paris’ Museum of Modern Art?

Olivia d’Aboville is a young and talented Filipino-French artist who completed her studies in Paris at École Supérieure d’Art Françoise Conte, then ESAA-Dupérre, and is slowly making a name for herself in the most prestigious international circles.

One of the pieces she presented was the Ptychogastria polaris, an imaginary sea creature resembling an anemone. To create it, she had collected cocktail stirrers from different bars in Manila. Once individually heated, then shaped to give her piece an organic look—her signature style—she had woven them together. The sea creature was then placed on a piece of glass and lit from beneath.

It was her collaboration with renowned photographer Neal Oshima that revealed the huge potential her sculptures had when confronted with different lighting. After months of research and hard work, she was finally rewarded. The inauguration night was a success and a handful of people spontaneously approached her requesting to purchase her work.

But she wasn’t ready to sell anything yet. Each piece was unique and very personal.

A couple of months later I came to visit her in her studio, which is in her parent’s house in San Lorenzo Village, Makati, and asked about her latest project. She had another exhibit, this time in Singapore!

Her project had been selected for i Light Marina Bay, a sustainable light art festival showcasing innovative light installations from 30 international artists.

She wanted to recreate a coral garden to raise awareness about the importance of coral reef preservation. Her father being from Brittany, a region in France known for  famous sailors—her uncle is one of them—and mother from an archipelago of 7,107 islands, it makes sense that Olivia loves the ocean.

A diver as well, she is fascinated by the beauty and diversity of underwater creatures that have always been an endless source of inspiration to her. Using recycled materials to create the ocean’s fauna is her way to show people how much plastic ends up in the sea.

Pursuing this allegory of consumerism, she had decided to push the concept of the Ptychogastria polaris a little further.  Henceforth, the sculpture needed to have its own stand. Olivia didn’t want to lay it out on a piece of glass anymore so she created a curved steel stand that allowed the piece to be illuminated by colorful LEDs.

It’s a technical detail that had a huge artistic impact. It gave the sculpture an even more organic and natural look as opposed to when it was laid out on a glass box.

The space she was allotted was significant, but it also represented a considerable amount of work given that she wanted to make 36 anemones in different sizes and heights. Everything is handmade, so imagine having to melt and weave 80,000 cocktail stirrers!

In 2010, Olivia and I were supposed to hang out and she suggested going to Ayala Museum. Kenneth Cobonpue was giving a talk about his work, which she was very fond of. We sat in the back and listened intently as he spoke about the creative and technical aspects of different creations.

Who could have imagined that she would one day work with him? Less than a year later, Olivia was approached to create a lamp for Hive, the collective of designers under the art direction of the multi-awarded furniture designer.

She decided to continue exploring the anemone, this time making a version that one could have at home. The art sculpture was slowly becoming a functional object, and Olivia was evolving from artist to designer.

The Anemone Collection by Olivia d’Aboville for Hive was born.

Today, the indoor wall lamp is sold in three sizes and traveling the world alongside other Hive creations and Kenneth Cobonpue’s collection.

It was just presented at Maison & Objet, a 1,400,000-sq ft furniture and design trade show. This Parisian event attracts over 85,000 guests eager to discover the latest creations of the most prestigious designers, and Olivia is one of them.

This amazing opportunity was soon followed by another. Olivia had been spotted by ELLE Décoration magazine. I couldn’t believe it!

This monthly magazine is a reference in France’s design industry, and the world’s best-selling luxury shelter magazine with 25 editions worldwide, and a Philippine edition in the works.

For its 25th-anniversary issue, ELLE featured the works of 27 young and upcoming designers. These are talents who, according to Gérard Laizé, general manager of the VIA (Valorization of Innovation in Furnishing), have found a way to “produce better instead of more.”

As exhibit curator, he chose Olivia’s work because he admired the way she explored environment-friendly lighting techniques like LEDs. The fact that nature is her inspiration reflects a very strong trend among young designers today, he added.

Not only would these young talents  be published in the prestigious magazine, they would also be able to show their pieces at Paris’ Museum of Modern Art. “The Anemone” table lamp, elaborated specially for ELLE Décoration, would represent the Philippines in the “Génération Design” exhibit.

Having your artwork in the same museum as Delaunay and Matisse, and you’re only 26, now that’s what I call impressive. Just like the opening party.

At ELLE Décoration’s opening, which drew a good crowd, Olivia stood next to her “Anemone” which was placed in a dark room, with six other lamp designers representing Belgium, Taiwan, Singapore, China, Finland and France. The media inquired about the piece and Olivia patiently explained her inspirations and production process. I couldn’t help but notice the audience’s surprise whenever she said her lamp was made of cocktail stirrers. You don’t expect recycled elements to look so delicate and refined.

Evidently, I’m going to tell you that the lamp representing the Philippines was the most splendid. It wasn’t dramatic or ostentatious; it glowed with graceful and subtle beauty. Being first and foremost an artist clearly gives Olivia an edge as a designer.

When we were students, she used to worry about her career choice, convinced she would be just another struggling artist. Think again!