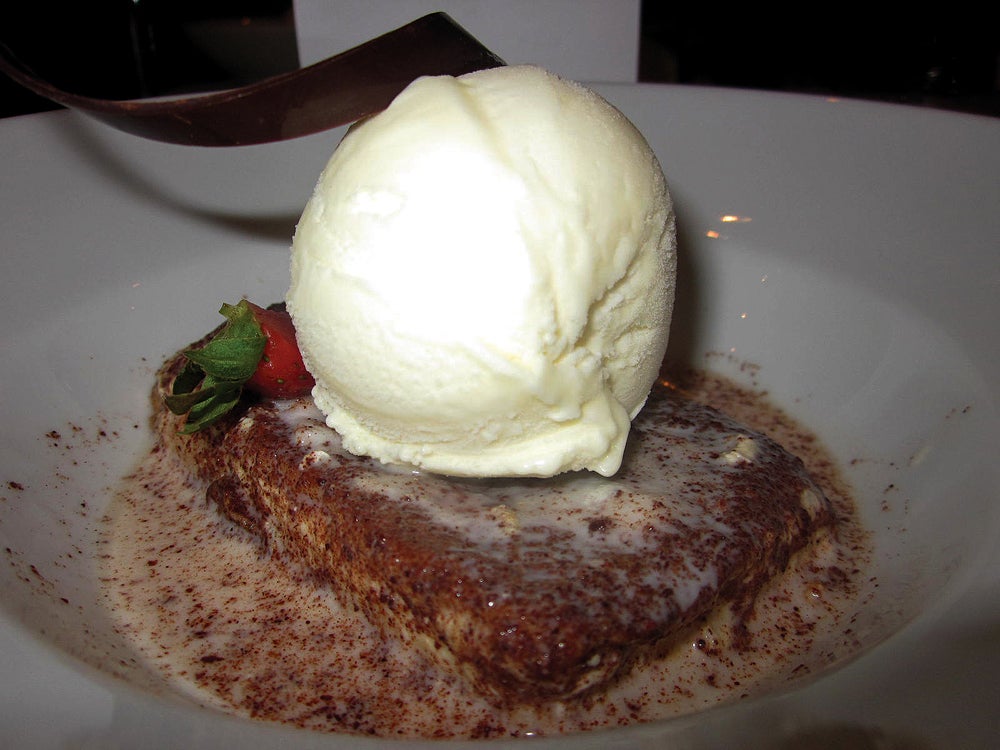 ‘Torrijas’–Spain’s version of the French toast

Glancing at the plate of Jamon Iberico, sausages and goat cheese being served at Hotel InterContinental’s Prince Albert Rotisserie, I was reminded of my journeys in Spain, where eating was as much a part of the trip as were the magnificent landscapes and the age-old churches.

Spain, once the conqueror of the Philippines and a superpower even before the term was coined, is the homeland of good food, after all. Its most famous dish may be paella, but it can take pride in its cheeses as well, and in its ham made from free-roaming pigs fed a diet of acorns and herbs; and its almond nougats, olive oils and the sweet fruits grown in the partly warm, partly cool Mediterranean weather.

Andalucian gazpacho, our second course during the Cocina Española lunch at Prince Albert, is also an iconic Spanish dish. This cold soup made from puréed fresh tomatoes is just right for a tropical country like ours, so it’s a wonder that it has never gained popularity in the Philippines.

Aside from being refreshing and flavorful, the gazpacho served that day had texture, provided by the topping of crunchy bits of cucumbers, onions, green peppers and croutons.

Though we may be familiar with Spanish churros, there’s another pastry even more popular among the Spaniards. Torrijas is somewhat like the Spanish version of French toast and is made with stale bread that had been soaked in milk, cinnamon and sugar, then fried in olive oil and sprinkled with more cinnamon and sugar.

Chef Victor Armero Torres of Hotel InterContinental Madrid, paired our torrijas with a creamy, homemade almond ice cream. It’s traditionally eaten during Holy Week and Easter, he said. But since any time of the year is a good time to try this tasty treat, chef Victor will serve it as part of the dessert during the ongoing Cocina Española festival in Prince Albert Rotisserie.

Here, chef Victor’s recipe for torrijas, which I’ve tested at home (and given a thumbs-up).

Remove the zest from the orange and lemon, using a fine grater or a zester. Pour the milk into a deep saucepan and add the orange and lemon zests, the cinnamon stick, 1 tbsp of the cinnamon powder, and 1 cup of the sugar. Simmer the mixture for about 5 minutes so milk gets infused with the flavor. Turn off the heat and let the mixture cool completely.

Arrange the bread slices in a shallow dish and pour in milk mixture. Let stand until bread softens.

In a separate dish, beat the eggs slightly. Dip both sides of the soaked bread in beaten eggs. Heat olive oil in frying pan and fry the bread until brown on both sides, turning once. (You may have to do this in batches.)

Transfer each fried bread to a clean plate. Mix the remaining ¼ cup sugar and 1 tbsp cinnamon powder and sprinkle over the bread.

When removing the zest from the orange and lemon, do not include the inner white pith, which is bitter. Zest only the outer skin.

Use day-old bread so it will be firm, not soggy.

If desired, you can use sliced French bread or baguette.

You can also serve the torrijas with a drizzle of honey.