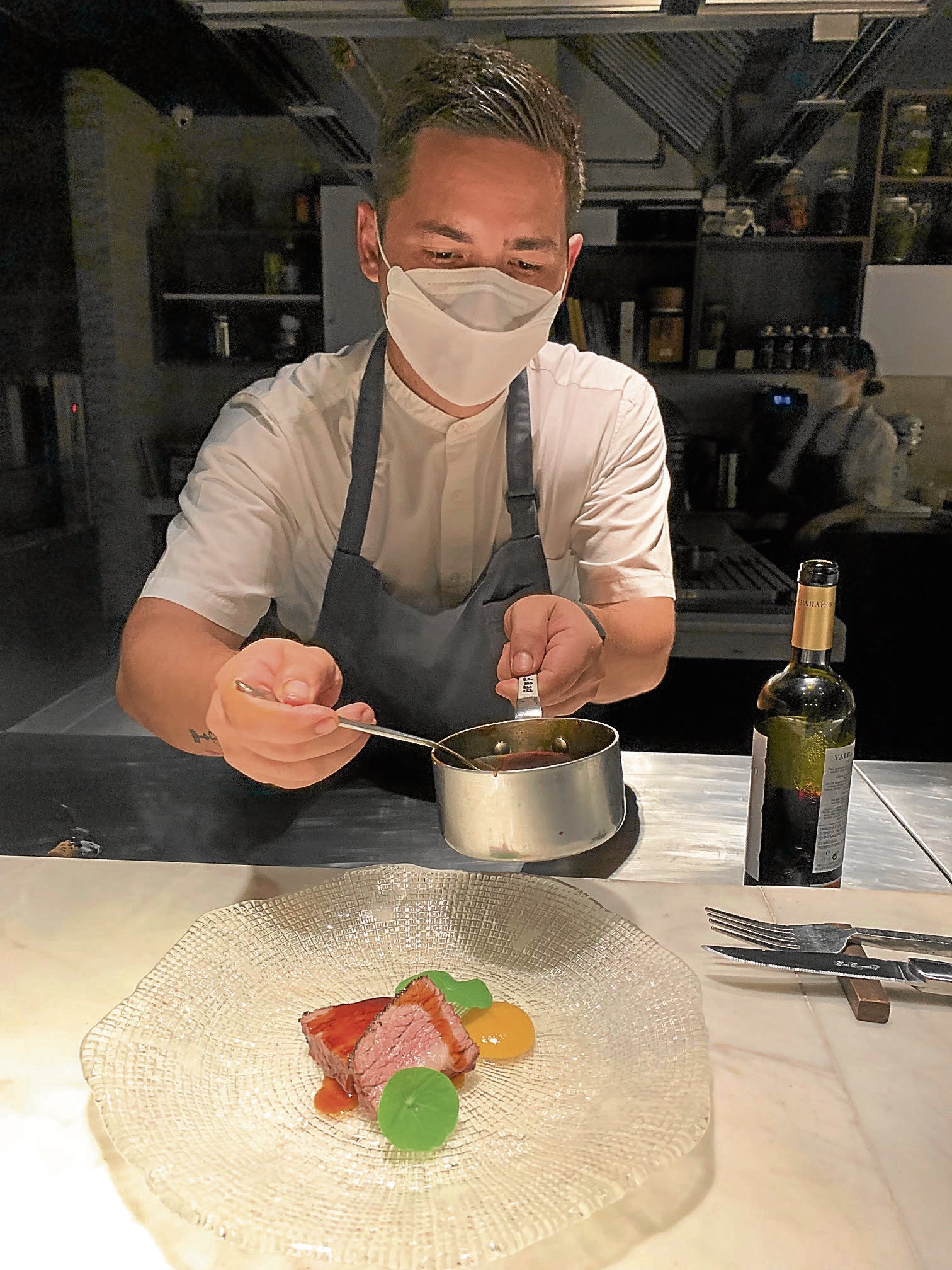 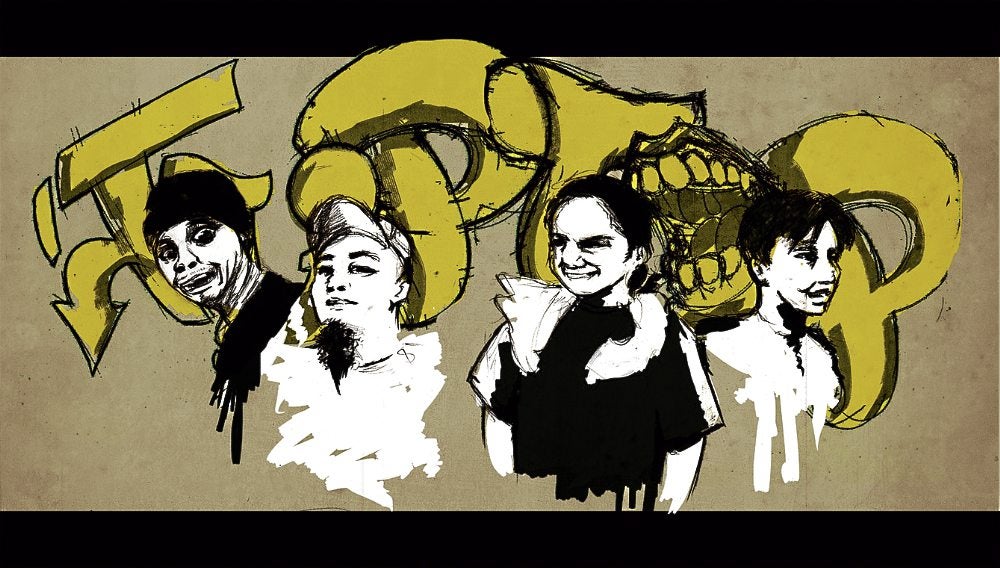 Nelland, 18, stuck her tongue out at the end of her repartee. Her head bobbed as she rapidly delivered her lines. Her hands pumped the air in the space between us to the beat of her repartee. She smiled quickly in the end, partly congratulating herself for her successful delivery, and partly to ease the sting of her last line. She just performed her fliptop routine in front of me.

A few years back, fliptop rap battles gained recognition in the Philippines quickly after several videos of such went viral on YouTube. Millions of Filipinos trouped to the popular video sharing website to watch two men test each other’s wit with rhythmic and clever lines delivered in an impressive tongue-twisting manner. The men also test each other’s tolerance for insults.

Tongue twisters and rhymes have a special place in the childhood of every Filipino. However, most are taught in English like “Peter Piper Picked a Peck of Pickled Peppers.” One could argue that fliptop battles are, in essence, a reclamation of childhood and its transliteration to the native tongue.

Anygma, one of the more famous faces in the fliptop scene, attributed the success of fliptop rap battles to the typical experience of Filipino male telling each other all types of bull in the parking lot “from grade school to high school.” Somehow, remnants of afternoons spent hanging out with my classmates, in grade school and high school, outside our school flashed in my mind. The memories are hazy, but it made me smile thinking of the crap we told each other.

Fliptop rap battles do not feature your usual nursery rhymes.  It’s common for colorful language to find its way in the prose of participants. Derogatory remarks occasionally pepper their prose. The constraints of rhythmic flow free participants from the burden of being politically correct. Words you wouldn’t dare say in front of your mother are spitted out in fliptop rap battles, without hesitation and without a blink of an eye from the participants.

For this article, I watched the fliptop rap battle between Ejo and W-Beat, for the First Filipino Rap Battle League, uploaded on YouTube a few weeks ago. It’s everything a typical fliptop battle should be. Perhaps, the tamest line from the battle came from Ejo: “Sana marami kang ininom na tubig bago makipagbuno sa tulad ko. Sa sobrang init ng aking linya baka matuyo ang utak mo.” There’s a lot of reference to popular culture. Spongebob was not spared. Nothing seems sacred. Plants vs Zombies was mentioned by Ejo, saying W-Beat was spared by zombies hungry for brains, simply because he has none.

Allegation that one of the participants was brainless had each man showcase his wit in a fliptop rap battle. Participants Ejo and W-Beat intertwined their prose with trite social commentaries and observation of the locals.

Poverty and prison were mentioned, just in passing, but it showed awareness of socioeconomic issues that dogs the youth engaged in fliptop rap battle. These two issues, afflicting American youth in depressed communities, are popular subjects of rap, even among rappers that broke into mainstream media. One can say fliptop rap battles serve as a medium through which Filipino youths decry their condition.

Dr. Ricardo Ma. Nolasco, in a 2009 commentary, “Intellectualizing A Language,” claimed “We will never be able to develop our languages for higher thinking unless we begin basic literacy and education in them.”  A year later, the same commentary had been cited by Harvey Marcoleta in “Jejemons: The new ‘jologs,’” wherein he explores the effect of the prevalence of “jejemons” to the development of the Filipino language. He argues that such is dependent to the leniency toward practitioners of “jejenese.” A female friend, the only “jejemon” I know, had since migrated to the United Kingdom. She now speaks with an acquired British accent. I have not received a single “jejemon” text since then.

That same year, fliptop rap battles first broke into mainstream consciousness after becoming such a hit on YouTube.  Anygma was interviewed by a popular men’s magazine, which decreed fliptop battles as one of the sensation of the year. Today, his YouTube channel “FlipTop Battle League” has 141,143 subscribers and 192,570,918 likes. The fliptop rap battle between Ejo and W-Beat I watched has almost 100,000 views.

Fliptop rap battles had gained a wider mainstream acceptance since 2010. A comedy show had a segment resembling such, replacing the rap with “pickup lines.” In YouTube, a casual search will reveal tons of videos of Filipino youngsters engaged in fliptop battles. It cuts through social classes and ages.

In the US, rap is so developed that occasionally, you read critics raving on the literary significance of the genre. Jay-Z and Lupe Fiasco are both noted for their literary techniques, similes and metaphors of life in America. In the Philippines, the same level of development could be attained. It’s not too far-fetched. We already have balagtasan to build on. Fliptop rap battles, especially one in Filipino, resemble a more musically updated version of the form. Indeed, one can claim fliptop rap battles are balagtasan on steroids.

Participants in fliptop rap battles display an awareness of Filipino popular culture in their prose. Though interjected with colorful language, rappers often have a clear grasp of the conversational, if not formal, form of the Filipino language.  It’s a healthy development in a country where local music is fast vanquished by imported tunes.

It’s easy to dismiss fliptop rap battles as a fad that will soon fade. But one must remember that Shakespeare broke new ground in English literature by weaving the language of the common with the formal language of the aristocracy within the rigors of poetry. The same case can be made in favor of fliptop rap battles. It affords innovation—which leads to development—in the Filipino language through the experimentation and exploration of rappers.  This isn’t “jejenese” fueled by technology. In fliptop rap battles, technology merely enables the genre to find an audience, and attain a critical mass to sustain development of the form.

At first glance, you will not mistake Nelland as an avid fan of fliptop rap battles. She has wholesomeness about her, with her soft voice and cute smile.  Another friend begins tapping the table for a beat. Nelland bobs her head, her arms frantically parting the space around her.