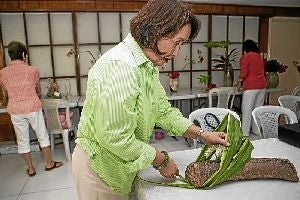 JOEY DE CASTRO started making stoneware pottery in 2003 because of his love for cacti and succulents.

He felt their intricate and fascinating forms, which he had worked so hard to cultivate, deserved a better home than the dreary commercial pots that were available at the time. 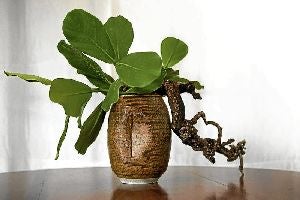 He was a quick learner at the Pettyjohn-Mendoza Pottery School in Makati and soon he was turning out his own one-of-a-kind bowls and basins to grow his plants in. His approach was to carefully consider the forms of each particular cactus before making the shape of the pot to complement or contrast it in very much the same way an Ikebana artist would make a flower arrangement.

As one of his teachers, I was very impressed with this level of passion. It wasn’t long before that same passion extended to pottery-making itself, and he started turning out beautiful plates, bowls, vases and other strong functional work.

I’m reminded of the story of Rosanjin, the famous Japanese chef who inspired the “Iron Chef” series. He began making pottery because he wasn’t satisfied with the tableware around. He felt his special culinary creations needed worthy containers to serve them properly. Interestingly he became equally, or even more, famous as a potter and his work can now be seen in museums.

It’s interesting how pottery goes hand in hand with other arts like cooking, serving food, containers for plants, flower arrangement. Perhaps this is why understanding the fine points of function is so important to potters like De Castro.

In his exhibit at Art Informal, Joey will be collaborating with artists from the Sogetsu Ikebana Manila Chapter headed by Evangeline Cheng. Sogetsu is known for freestyle arrangements, which should be perfect for De Castro’s free-form vases.

John T. Go Hoc of the Ikenobo school has also agreed to do a classical style arrangement for the show. I think collaborations like this are going to be important in the future to get young people interested in these ancient artforms.

Glazes are the thin coating of glass potters make in the final firing of their works. This is one area where De Castro excels and is showing himself to be an emerging master. Some potters shy away from this technical aspect of ceramics involving math and chemistry or, as I prefer to call it, alchemy.

Joey seems to embrace it. This might come from his background in photography, which also has its technical side. He has had five photography exhibits in the past.

Like many of us, he prefers natural materials. Some of his favorites are pine ash from Sagada; eucalyptus ash sent by Australian friends; and anagama ash from Pablo Capati’s wood kiln. I saw over 30 glaze buckets in his workshop.

He has also begun experiments on the elusive and mysterious oil-spot glaze from ancient China, so beautiful but so difficult to make. To date, no Philippine potter has mastered it. My friend Jaime de Guzman once told me: “You have to have the right mantra to make that.”

De Castro will be showing many works done in the raku process for this, his fourth solo exhibit. Raku is a traditional Japanese technique of pulling red-hot, glowing works straight from the kiln and placing them in a container of sawdust to promote interesting and spontaneous color changes.

He has also been using paper clay, a mixture of clay and paper pulp which allows him to spontaneously form his sculptures. “Sarap,” he says. “Just fold, fold, pinch, pinch.” This is a relatively new technique here in the Philippines 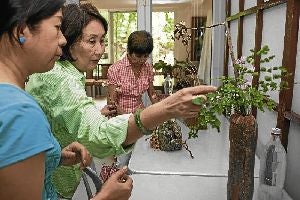 “Rich glazes contrasting rough sandy surfaces” is how he sums up his approach to clay and glaze-making.

Many of the local potters, myself included, live in quiet rural surroundings far from Manila. Joey, however, is in the heart of the metropolis. His maze-like workshop occupies parts of the fifth, seventh, eighth and ninth floors of an apartment building in Mandaluyong.

He cleverly uses the spaces available, areas like the top of the elevator shaft, for example, as the drying room for his works. His potter’s wheel is actually on the rooftop commanding an incredible view of the city.

I asked him if the Manila skyline had any influence on his work, and he said emphatically: “No, no, it’s all about clay and sand, ash and stone. All natural.”

The rooftop is also the nursery for his cacti. In the future, he intends to open up his workshop for students and interested individuals. 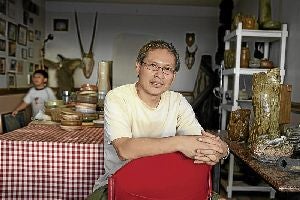 Last year De Castro was chosen to be the Philippine delegate to one of the most important international ceramic events, called Clay Energy, held in Australia every three years and organized by world-famous publisher and potter Janet Mansfield.

The five-day workshop was attended by 500 clay artists from around the world.

In the festival, Joey met Sandor Kecskemeti, a Hungarian artist well-known for monumental clay works influenced by Henry Moore and Stonehenge. Joey said that made a strong impression, and on his return he began experimenting with purely sculptural, rock-like forms. 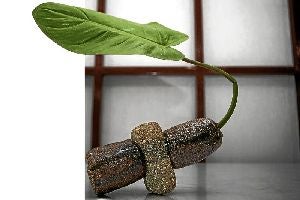 I always encourage artists, especially young ones, to go abroad and meet their peers. It can be a daunting experience, there are so many great clay artists around, but it’s an important way to open up. It’s not so much about learning secrets and new techniques as it is about seeing new ways of thinking and looking at things.

De Castro says this exhibit will be a mixture of functional and sculptural works. We are excited to see the results of his latest adventures in clay.