WHEN you hear the word circus, you imagine big tents with colorful flags and draperies; gleeful clowns; small, lithe women flying through the air. You hear the lion roaring at the end of a trainer’s staff. The air smells of popcorn, saccharine cotton candy, or a variety of ice-cream flavors. 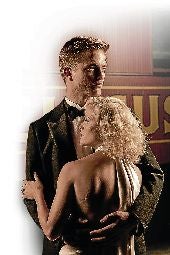 You would think any story about the circus bears no hope of escaping this childish stereotype. We certainly had this apprehension with “Water for Elephants” (Algonquin Books of Chapel Hill, 2006), the sophomore offering of “Riding Lessons” author Sara Gruen. We are glad to have been proven wrong.

A historical novel, “Water for Elephants” displays the features of the traveling circus. It tells of a time when giant tents were staked to bare earth on a local public field, before the advent of permanent theme parks, before resort hotels came up with their own resident acts.
“Water for Elephants” is about the other side of the curtain, the dark beyond where the performers disappear after the act. We read of their lives, the animals, and most especially the “roustabouts”—the rank-and-file on whose ill-fed backs the wheels of all circus behind-the-scenes activities turn, after the spotlights go out.

The result is a no-holds-barred account, told through the memories of Jacob Jankowski (Robert Pattinson), the main protagonist, now a 90-something at a home for the elderly. That the story is set in the context of the Depression makes the grit more tangible, the hardship more heavy.

Jankowski feels it most after his parents die in an accident, and he flees Cornell in confusion. He finds himself stowing away with a circus train, and discovers quickly that the life of the company is not as glitzy and awesome on this side of the tent. But he manages to get hired as the resident animal husband, thanks to his course in veterinary medicine.

Jankowski is valued more than the other roustabouts by the circus master, August (Christoph Waltz), because of his relationship with the show animals. This is also the reason he is held in high esteem by the master’s wife, as well—Marlena (Reese Witherspoon), whose liberty horse act is the main attraction of the circus.

At their center is the elephant, Rosie, in whose successful performance all faith reposes, to stave off ruin (the animal’s anecdotes in the novel, Gruen says, are also based on real show elephants). But in the end it is the expected tension among the three characters—Jacob, August and Marlena—that keeps the reader in tow throughout the story.

“Constantine” and “I Am Legend” director Francis Lawrence reduces the novel into a period love story. The 120-minute final cut just does not develop the characters fully, up to the epilogue, and even that is unnecessary, as it looks like a harried attempt to fill in the gap between when the circus went belly-up and the present.

Gruen’s characters are deeper and more developed in the book despite the limited exposure because of the narration’s shifts from past to present, and vice versa. The era is felt in the context. Even the animals jump out of the pages and romp and rear in the reader’s imagination.

Waltz, specifically, had a difficult time—if he even had enough—portraying screen the frequent murderous psychoses August is loathed and feared for.

Pattinson has tried to show that he is a bankable actor outside the “Twilight” franchise. In “Water for Elephants,” he once again comes up short; his quirky facial expressions do not help.
Witherspoon is just too old.

But Hal Holbrook, who plays the old Jankowski, is a breeze. While the character in the book is rougher around the edges, Holbrook gives the old Jacob his own fresh spin, and it looks like he is naturally having fun—a nonagenarian with nary a care in the world, and it shows in the actor’s eyes as well as in the cool delivery of his lines.

But, who does not want to go the circus? Or, in this case, who would not want to hear a story about it?

Minus the frills, and the merits of the film, “Water for Elephants” is still an amazing story from an old-timer with firsthand testimony. It draws you, as a circus does, because it piques your curiosity about what is inside.
Have we seen the 800-lb woman? The rhino preserved in formaldehyde? The beautiful woman who whispers to the horses, beloved by all?

“Water for Elephants” offers that, and more, as it seems to call: Come one, come all.