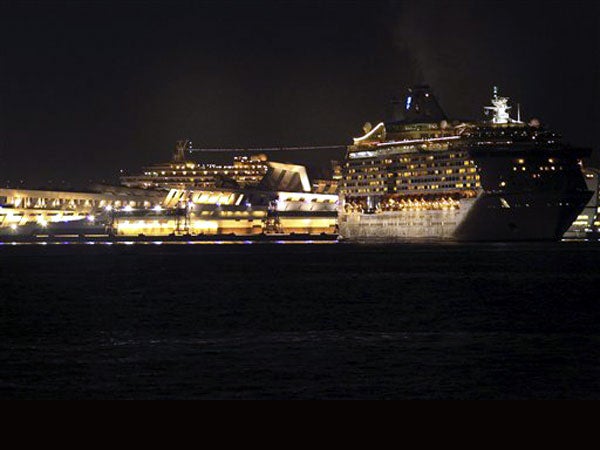 "Voyager of the Seas" departs from the newly opened Marina Bay Cruise Center on Monday Oct. 22, 2012, in Singapore. AP PHOTO

SINGAPORE—Singapore has opened a new cruise terminal capable of berthing the world’s biggest luxury liners, in a bid to boost the city-state’s position as a regional travel hub.

The Marina Bay Cruise Center Singapore was opened late Monday with company officials saying it will allow the island-state to tap the growing number of people in Asia taking leisure trips on luxury vessels.

Operated by a joint venture between Singapore Airport Terminal Services and Europe’s Creuers del Port de Barcelona, the terminal can dock ships weighing up to 220,000 tons and measuring a maximum 360 meters (1,181 feet).

With deep waters, a large turning basin and the absence of any height restrictions, the terminal can accommodate the newest generation of ocean liners like the Royal Caribbean’s oasis-class ships.

“The official opening of (the terminal) marks a significant development for both the cruise landscape in Singapore and the Asean region,” said Melvin Vu, chief executive of the joint venture that operates the Sg$500 million ($409 million) facility.

Asean is the Association of Southeast Asian Nations that groups Singapore with Brunei, Cambodia, Indonesia, Laos, Malaysia, Myanmar, the Philippines, Thailand and Vietnam.

Vu said the terminal would serve “to further anchor Singapore’s position as an attractive homeport for cruise lines” because of its modern facilities and proximity to Changi Airport, itself a regional aviation hub.