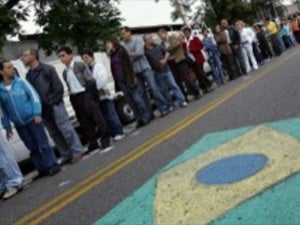 SAO PAULO – An international study indicates that the English-language proficiency of Brazilians has worsened, going from low to very low. That’s worrisome news given that English will be the lingua franca during the World Cup this country will host in 2014 and the 2016 Olympic Games in Rio de Janeiro.

Brazil ranks 46th among the 54 countries in the study prepared by global language training company EF Education First, based in Zurich, Switzerland. The data is collected from the company’s own online or placement tests, many of them given to people seeking to improve their English.

Economics professor Samy Dana of Brazil’s Getulio Vargas Foundation says, “The poor English-language proficiency of Brazilians shows that this country is not fully prepared to host major events like the World Cup or the Olympic Games.”