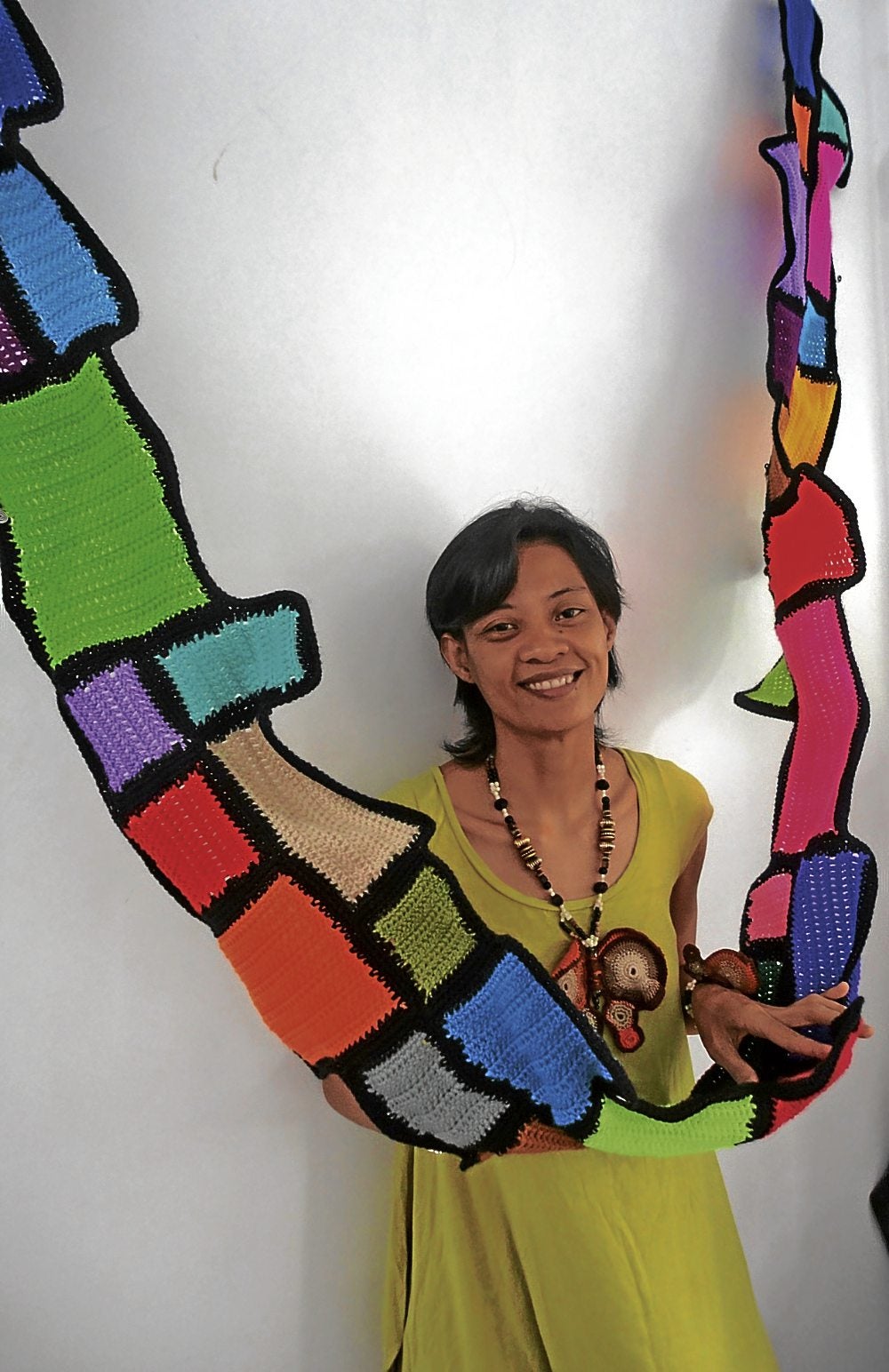 You can never put a good woman down, especially if her compulsion to create and create further is strong.

Aze Ong, Joni Gohu and Sinag de Leon have mounted a show at the year-old Gallery Grey on the second floor of The Village Corner, near Beverly Hills subdivision on Ortigas Ave. Extension, Antipolo City. The walls bloom with color from paper mandalas, fabulous crocheted works that must have used all colors of thread available in Quiapo or Divisoria, and small acrylics that are actually a painter’s response to the front-page news.

Ever since De Leon, 38, was invited as a resource person for a Filipino folk arts class and festival at the University of the Philippines Baguio, she has hardly paused from snipping away on paper, preferably the locally handmade kind sourced from Iloilo, Davao and Baguio, using her pointed, five-inch short-blade scissors.

She ensures that her shows have a demo component. She explains, “These sessions are perfect during shows because there are already examples of paper-cut art. I encourage people to join so they could experience this art form. I explain that paper cuts are not difficult to make. The secret is in knowing how to fold the paper first.”

Participants tell her that paper cutting is difficult and requires patience. Others don’t need much prodding and get immersed in cutting. After following the patterns De Leon prepares for them, they make their own.

“The effort of teaching is doubly rewarded, especially when they tell me they’re happy to discover paper cutting, and look forward to making more. I tell them that when you work on paper, keep in mind that it is precious. You have to use paper wisely. You do not have to always buy and use new paper. You can recycle what you have,” said the Philippine Studies graduate.

Her paper cuts evoke ancient mandalas, even Christmas lanterns. She says, however, that everything inspires her. She neither makes direct copies nor deliberately draws patterns for paper cuts she makes. “I try my best to keep what I do as spontaneous as possible. I like to be surprised every time. I only make paper cuts when in the mood.”

That mood must be constant since De Leon has nine solo and 13 group shows under her belt, apart from being active in the bazaar circuit where her unique double or triple frames (artworks with picture frames or mirrors), cards and bookmarks are sold. These are also available at Likha Diwa in Krus na Ligas, Quezon City; Mt. Cloud Bookshop in Baguio City; the Cultural Center of the Philippines shop in Pasay City; and Anthill Fabric Gallery, Pedro Calomarde St., Cebu City.

To support her passion for paper, De Leon, a swimmer, runner, cyclist and mountaineer, works for My Little Athlete, the company of younger sister Ani de Leon-Brown that caters to sporty kids and adults.

Gohu, an Ateneo Interdisciplinary Studies graduate, went into merchandising ventures with her classmates apart from working in the marketing department of a clothes store and a giant mall. But she always had an interest in materials, so she enrolled at an interior design school.

She found out the teachers didn’t really teach. She learned to handle lacquer and other things by working closely with craftsmen.

Gohu, whose baptismal name is Eileen Joan but had a mother enamored with the voice of Joni James and gave that nickname to her daughter, says, “Over time I felt the need to express myself. I’ve always had a pencil with me so I taught myself to draw and paint, developed my own methods, and signed up for a class under Fernando Sena.”

Sena’s assistants often corrected her and told her to follow the way things were done in the class. One day, the soft-spoken Gohu went up to Sena to ask, “Am I good enough?” He answered, “Magaling ka naman (you’re good).” That was when he told the assistants to leave her be because she already had her own style.

She interprets the news, usually the story behind the big photo on the Sunday front page, using acrylic paint (10 layers of it) on canvas. She says, “I pick up something interesting or even something stupid that people are making a big deal out of, then I paint.” Subjects range from a scandal in Boracay to carefree kids ignoring warnings of a drought.

Ong, 35, a Mass Communication graduate of Assumption College, has been crocheting since her grade-school home economics class days. Even then, she was already a nonconformist. Although they had to follow patterns, she did out-of-the-box variations, would be the first to finish and earn high grades.

She describes her crochet art as a calling, adding that she doesn’t quit until the work is done, even if it measures a huge 127” x 14”. Her work includes accessories like coin pouches, shoulder bags and neckpieces.

For a year, she exhibited large wall pieces at Likha Diwa, Kanlungan ng Sining Gallery at Rizal Park, San Beda Museum, and Espasyo Siningdikato in Dasmariñas, Cavite, but refused to sell them despite viewers’ interest. At the openings, she’d don a big cape and dance to percussion instruments that she herself crocheted with shells and beads (these have the sound of rain sticks). Those who have seen her perform say the cape radiates light and a healing energy that makes them feel lighter.

She says, “I couldn’t let my works go because I couldn’t repeat the experience of making them. I kept almost all my works. When I used small pouches, friends or coworkers asked the price and I only smiled. My inspiration is from my heart and soul. Selling them felt like selling my heart and soul. I felt that my work was priceless as I gave my whole being so passionately into its making. They were like my children.”

She learned detachment when she overheard comments like “Why isn’t she selling? Is she selfish?” or “What’s the point in exhibiting?”

“I saw the light—that I didn’t have to belong to a tribe to make art or perform it. Sharing yourself to others is the best gift you can give.”

She hopes that sales from her works will fund pet projects: an exhibit-fashion show; puppet poetry; bayanihan involving a huge work that would need help from people who can fix ropes so she can crochet the form. For the last, she might use tons of ropes and look for a big venue to make it.

Through all this she feels protected by what her husband Norman Ramirez calls her “totem”—an angel-butterfly.

The three-woman show runs until November 2.