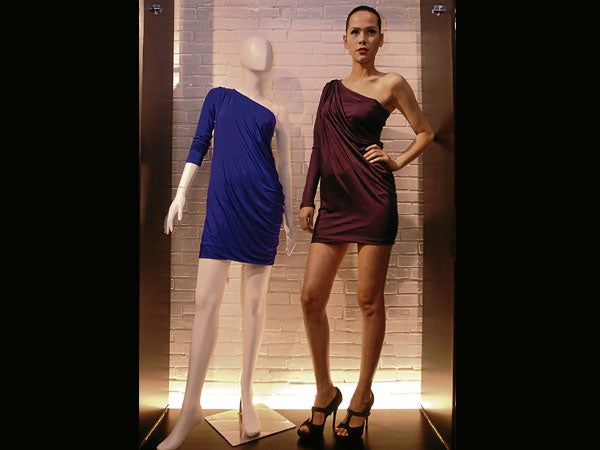 Women get their due in Rhett Eala’s resurrected DUE

If you build it, they will come, they say. To Rhett Eala’s loyal clients, however, it meant the other way around: “If you bug him long enough, he’ll cave in and make it.”

Indeed he has. Those unrelenting women who bugged the fashion designer no end about bringing his defunct label DUE back have only themselves to thank as Eala finally relaunched DUE this week with an exclusive preview in Greenbelt 5, Makati City.

DUE is the line Eala first designed under Rustan’s in 1990, when he returned home following his studies in Italy and a stint in New York. DUE (pronounced doo-wê) is Italian for “two.”

Even as he said in recent interviews that he wanted to concentrate on designing men’s sportswear—Eala is, of course, the creative director of Collezione C2, which made the Philippine map famous—and was also considering a dressier line for men, he says bringing back DUE was a plan.

“I’ve always wanted to do it,” he says. “It was always at the back of my mind. People also kept coming up to me asking when I’ll bring it back. You can’t help it; it’s really women who shop.”

The first reincarnation of DUE is a modest collection of 25 or so draped party dresses, predominantly in jersey material. It seems he has expanded on the handful of jersey dresses he showed on his 20th anniversary show last year, which were sold under the Collezione C2 brand.

Sexy without being overtly so—he bares an arm here, the shoulders in another—the DUE dresses will flatter women from sizes S to XL.

“The outer part is draped so you need not worry about your [less-than-flat] belly showing,” he said of a one-shouldered burgundy mini dress. The inner part of the one-piece jersey number is cut close to the body but has an overlay that’s draped on the front and back. He repeats the same draping trick on the other designs.
There are also a couple of pretty, Lanvin-esque ruffled styles in a nylon material; a frosted linen shift with a long back; soft-draped cardigans and tops.

This mindfulness of what’s flattering to a wide demographic (read: age and size) of women is one of the reasons for Eala’s success in retail. He designed DUE for Rustan’s for 11 long years. During this time, he built a strong following among Manila’s most stylish women. Two years after his departure, the department store put DUE to pasture. (There’s no conflict with Rustan’s with regards to the DUE name, Eala explains. The trademark wasn’t registered to any company or individual before he applied for one.)

The designer soon after set up his own RTW line called Wink, and once again started a trend: the much-copied gossamer poncho worn by women to disguise torsos and limbs that hadn’t made friends with a yoga mat. (Not surprisingly, a soft cotton-jersey poncho is now the best seller in the new DUE.) Wink eventually bowed out to the lower-priced, high-street imported brands that entered the market.

Then came C2 Collezione, the designer’s renaissance of sorts—and for a brand that was also seeking rebirth. His design brilliance would turn out be in perfect sync with the business flair of his boss, Joey Qua. The three-year partnership has proved quite successful and harmonious. The brand now has some 30 stores and thousands of Philippine map shirts sold.

On Wednesday, Eala launched the DUE/Collezione boutique in Greenbelt 5. Another will open in Eastwood, Quezon City, shortly. The Power Plant store will remain C2 Collezione, but will also carry the DUE collection for the time being. DUE will be formally launched in September.

While the first DUE collection is dressy, Eala will later introduce work wear. The line is remarkably well-priced: from P880 to P3,900. One long, strapless dress with a draped bodice is P3,500. “If you’re going to an event where you don’t like the people so much, you can wear this,” he says, chuckling. “You don’t have to make pagawa.”

Like C2 Collezione, the clothes are made in the company’s factory here. Eala and Qua refuse to outsource production abroad in order to maintain quality control.

Eala is both happy and nostalgic about the whole process of reviving DUE. He says, “The only difference is that now, it’s in my own terms. I don’t need to go to someone for approval.”