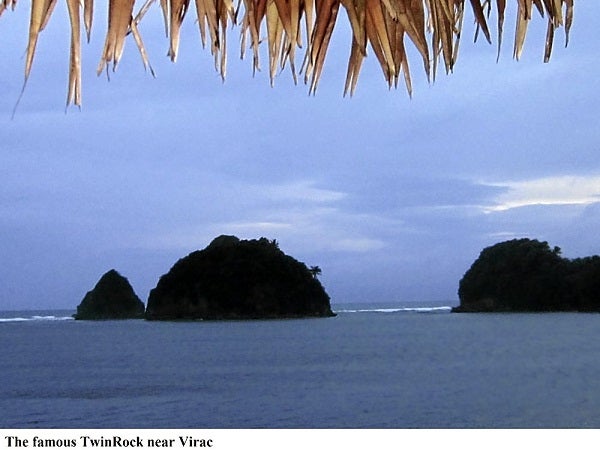 The tall tale is that the men of Spanish conquistador Juan de Salcedo were pursuing pirates operating in the Bicol Peninsula in 1573, whereupon they came to the dwelling place of a Datu and his family living in a place filled with flowers.

The flowers were called “burac,” subsequently changed to “birac.” And that is how the area became Virac, the capital town of Catanduanes.

Wind-swept, captivating Catanduanes, a big island province known for its frequent storms emanating from the Pacific Ocean and Puraran Beach, a byword among Filipino and foreign surfers, is easily among the most scenic provinces in Bicolandia, a region known for its natural beauty.

The province is a three-hour ride via Ro-Ro vessel from the Bicol mainland, entry point being the Port of Tabaco City, Albay. 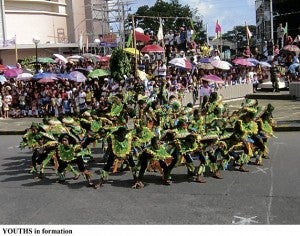 All around are greenery, cloud-draped mountains, a long coastline, rock formations, beach resorts (check out TwinRock), two historical churches (the Virac Cathedral and the enchanting St. John the Baptizer Church in Báto, near Virac, circa 1883); and caves, including Luyang Cave in San Andres, “where natives were choked to death by Moro pirates in the 17th century.”

Representing the lone district of Catanduanes is Rep. Cesar Sarmiento.

Highlights were a Kundiman Fiesta, streetdancing by schoolteachers and students capped by a “Festival of Festivals/Showdown.”

To the strains of a traditional Bicolano song, the men and women teachers from the different towns of the province danced the Pantomina, a traditional marriage and courtship dance. There was graceful movement of the hands, the women demure, and the men forceful when the choreography demanded it. There were chants, elaborate bows and mock chases.

In a real wedding reception, the guests were expected to shower money on the happy, dancing couple.

The street dancing of the students was understandably more energetic- frenzied at times—and served as an appetizer for the “showdown.” 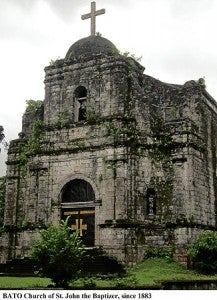 With giant props, full costume regalia, drums and bugles, and icons of Mother Mary and the patron saints, the seven contingents showcased their dancing skills as well as the produce of their town (as in abaca, rice or crabs).

They performed key and lively segments from their respective town festivals.

Two contingents—from Viga, the defending champion, and Gigmoto—were nothing short of spectacular. As a judge, I gave slightly more points to the contingent from Gigmoto, if only because of the skill of their dancers and gymnasts.

The other jurors, however, gave the nod to the team from Viga.