The voice of an underdog | Inquirer Lifestyle ❮ ❯ 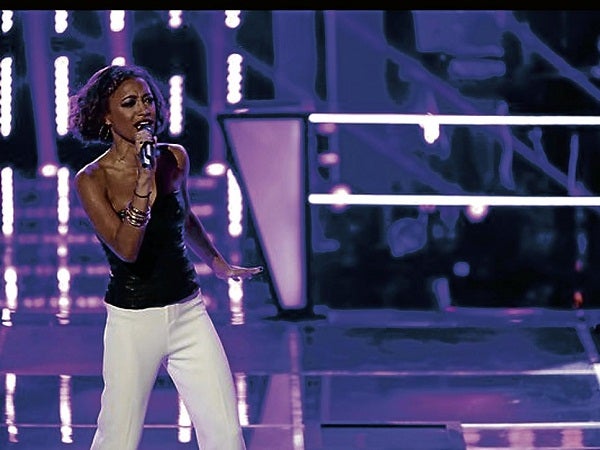 The voice of an underdog

It’s strange that an underdog story would come out of a singing contest reality show, but that is been the case for the third season of “The Voice.”

Amanda Brown, a native New Yorker who was reared on gospel music, worked as a back-up singer for Adele and Alicia Keys. Since coming on the show, she has gone from barely making the cut to becoming one of the show’s front-runners.

Brown narrowly survived the show’s blind auditions. She was almost finished performing a rendition of “Valerie” (from British band The Zutons) before CeeLo Green pressed the button and turned around for her at the last minute.

Oddly, her highest point in the show came with a defeat. She was the first singer in the show to be stolen by another team. During the battle rounds, she lost to Trevin Hunte after they performed a duet of Maria Carey’s “Vision of Love.”

After voicing his regret for pitting the two against each other, Green ultimately went with Hunte. All the other judges pressed their steal buttons within a fraction of a second, leaving Brown to decide which team she wanted to join. Had it not been for the steal option, Brown would have been eliminated. In the end, she went with Adam Levine, choosing him, as the show’s catchphrase goes,

“to be a part of her journey.”

Of all the singing contest reality shows, why did you choose “The Voice”?

Tell us about the live auditions. How did you feel when CeeLo Green turned around?

I wanted to focus on my live audition and on my performance and give the best performance that I could. And then depending on what resulted after that, I would move from there.

If four coaches turned around or one coach turned around, I kind of wasn’t thinking about that. I just wanted to do a great performance and hopefully have someone turn around, which CeeLo did. When he did, I was very, very excited.

He’s such a talented artist, performer, producer and he’s had so many years of experience under his belt. It was a pleasure working with him. I feel honored and blessed to have been on CeeLo’s team and now to be on Adam’s team and have the opportunity to work with them both.

It took a while before CeeLo pressed that button. What was going through your mind while you were singing?

Occasionally, I walked by the chairs and saw that their backs were still turned. I didn’t want to focus on that. I wanted to focus on the song and on the audience and on just having a good time and giving a really good performance and trying not to think too much about my fate hanging in the balance.

After the battle rounds, do you feel more pressure?

What’s the difference between CeeLo Green and Adam Levine as mentors?

They both like to think outside of the box. CeeLo is very much the kind of artist that does things that you may not expect and that are exciting and fun in terms of his performance. I think that Adam, in some regard, is very similar. They both are the kinds of artists who challenge themselves to grow and to get better. In that regard, I have much to learn from both. They’re both just so talented and so experienced that for me it’s just a great thing to be able to work with both of them.

What kind of music did you listen to growing up?

I listened to gospel music because I grew up in a Pentecostal Church. The first secular artist that I listened to was Mariah Carey. I think I was about six. Later on, when I got to high school, I listened to a bit of classical music, a bit of jazz, a bit of R&B, a bit of rock, a bit of soul. I love Radiohead. I love Paul

How did you feel when all of the coaches fought over who got to have you on their team?

I was really excited and honored being in that position. All the coaches were very enthusiastic. It’s great but it also made it very difficult for me to choose which team I wanted to be on.

Why did you choose to go with Adam’s team?

Adam said something that resonated with me. He said something along the lines of ‘I can’t help you be a better singer. You kind of have that under control. You’ve got that. But what I can help you with is to think outside of the box in terms of your artistry and your performance.’ That’s what I strive for as an artist and as a performer, to think outside of the box and really challenge myself.  So that’s why I chose him.

Watch The Voice on AXN Sundays at 8 p.m.