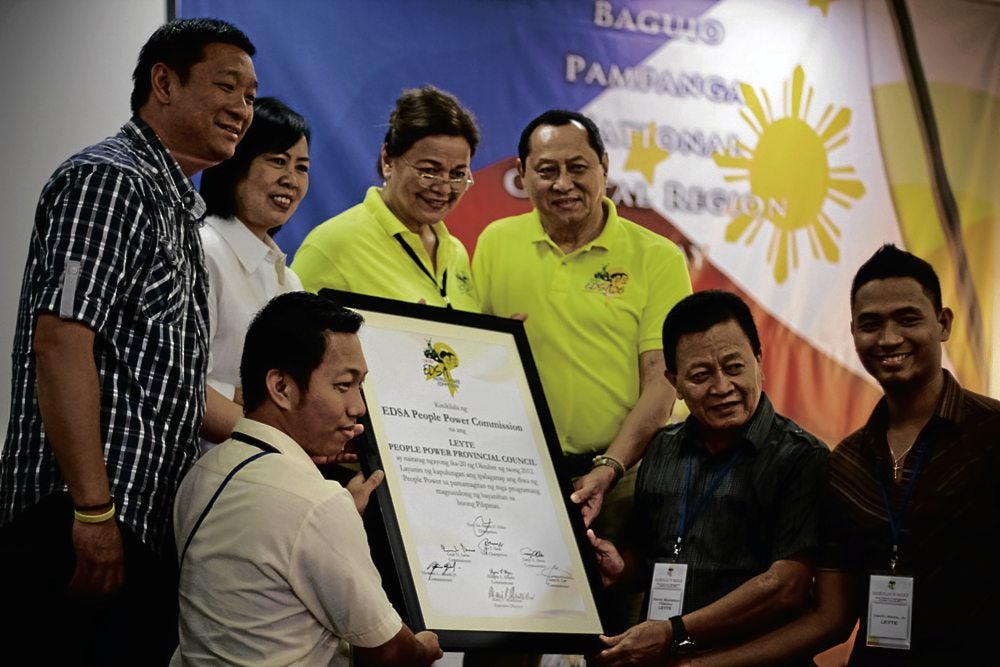 COMMISSIONERS Anton Mari Lim, Milagros Kilayko, Emily Abrera, and Cesar Sarino (back row) present a certificate to one of the People Power provincial councils during the workshop. PHOTOS BY JILSON SECKLER TIU

In his “Remembering Ahanagran: A History of Stories,” historian Richard White wrote: “History forges weapons from what memory has suppressed or forgotten.”

With the 40th  anniversary of the declaration of martial law this year has arisen a movement that promotes the “Edsa brand” of activism and pushes the realization of a Memory Museum that would highlight the People Power Revolution of 1986 and events that led up to it.

“It has been said that those who do not remember the past are condemned to repeat it,” said Presidential Communications Operations Office secretary Herminio Coloma  on behalf of Vice President Jejomar Binay during the Edsa ’86 Memory Museum roundtable discussion recently.

“With our own Memory Museum, it is my hope that future generations will not only recognize the heroism and sacrifice of nameless Filipinos who suffered torture, indignity and death so we may live in freedom. My fervent wish is that they begin to value, cherish and protect the freedom that they now enjoy and often seem to take for granted.”

The Office of the Vice President (OVP) is one of the main proponents of the museum project alongside the Edsa People Power Commission (EPPC) and the National Historical Commission of the Philippines (NHCP).

The forum opened the dialogue between members of the  offices and guest speakers who had participated in establishing places for recalling turning points in their respective countries’ histories similar to the Philippines’ martial law and the Edsa Revolution.

Patricia Tappatá Valdez shared her insights on the conception of the Parque de la Memoria and Monumento a las Victimas del Terrorismo de Estado (Memorial Park and Monument to the Victims of State Terrorism) in Buenos Aires, Argentina.

Anthropologist Maria Eugenia Ulfe talked about the developments of Peru’s Place of Memory, a venue for remembering the “period of the internal armed conflict” in her country.

“The roundtable conference on the Edsa ’86 Memory Museum is the first step we have taken toward realizing the dream,” said the EPPC.

The three lecturers provided helpful strategies and ideas on how the Philippines could come up with its own museum. They pointed out the challenge of raising funds and ensuring the museum’s sustainability.

The Edsa ’86 Memory Museum is proposed to be the country’s epicenter for showcasing key events and players from the martial-law declaration up to the 1986 People Power Revolution. One of its main purposes is to bridge the gap between the generation that experienced martial law and those who merely learned about it second-hand.

The event served as a gathering of existing People Power Provincial Councils, where members of all ages concretized what the entire commission stood for and what they would still be developing over the next few years.

“The Spirit of People Power should go beyond Edsa. This is why we have the councils. This has to be lived every day,” EPPC executive director Maria Montelibano said. “Let it be not an unfinished revolution.”

Sarino, who firmly believes in “bringing back the original character of the Filipino,” said Edsa brought out the best in the Filipino people and “is not appreciated as it should be.”

EPPC commissioner Emily Abrera said the NHCP was already working on the next step, which involved “conducting training for collecting archival materials” such as formal interviewing and standardized retrieval.

EPPC is preparing recommendations for “places of memory,” which are supposed prominent sites during martial law and People Power.

Aside from the museum, EPPC is also planning on putting up memory markers in these “places of memory” to commemorate martial law’s everyday heroes and to endorse the Memory Museum.

To foster knowledge of martial law and the Edsa Revolution, the EPPC is planning to publish children’s books on the subjects.

In the context of White’s statement, fulfilling the Edsa ’86 Memory Museum and memory markers may become weapons against forgetfulness and future threats against democracy.