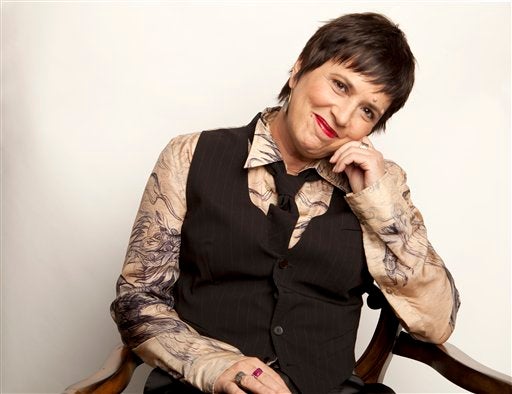 Eve Ensler on a new play and beating cancer

NEW YORK—If you’ve ever fired up your computer and cringed in anticipation of what nasty e-mails await, pity Eve Ensler.

The Tony Award-winning playwright and activist gets a daily record sent to her of atrocities against women—a never-ending drumbeat of rape, genital mutilation, imprisonment and murder.

“In my inbox on any given day, I can tell you every single story of any violation that’s happening to women anywhere in the world,” Ensler says. “It’s horrifying. My inbox is like a nightmare.”

Such daily horrors would surely shut down most people, sending them back to bed with the covers pulled over their heads. But there’s something about the author of “The Vagina Monologues” that makes her get up and yell.

It was Ensler who spoke out when a Congolese doctor who helps women recover from violent rapes was shot at this year. It was Ensler who denounced a Taliban group for shooting a teenage Pakistani education activist in the head. It was Ensler who lambasted a US Republican congressman who recently argued there was “legitimate rape.”

“When I see enormous injustice, when I see people messing with women’s rights, there are certain things I can’t be quiet about,” she says. “I cannot sit there and let those people do that. That just makes me insane.”

She says that with a smile. For a crusader, Ensler isn’t dour. The woman you meet may be deadly serious about her life’s work, but she’s also quick to laugh. She attributes some of her ebullience to surviving stage IV uterine cancer.

“It was like checkout time,” she says of her battle two and a half years ago. “I think when you come so close to dying, everything is so incredible. You just can’t believe you get to be alive.”

These are busy days for the 59-year-old. Her play “Emotional Creature” has opened off-Broadway, and she’s finished a memoir “In the Body of the World,” due out next spring.

Then, of course, there’s her plan to get a billion women worldwide to walk out of work, school or wherever they are on Valentine’s Day and dance together in solidarity against violence.

“A billion is a lot of people, it turns out,” she says, laughing.

The “One Billion Rising” initiative is part of Ensler’s global V-Day movement, which helps organize anti-violence events each year around Valentine’s Day. The figure of 1 billion comes from a UN estimate that one out of every three women will be sexually assaulted.

This year is V-Day’s 15th anniversary, and from now until mid-February, Ensler will be barnstorming Peru; Guatemala; Mexico; Los Angeles; Hong Kong; the Philippines; New Delhi, Mumbai and Chennai in India; Egypt; Paris; Belgium; London; the Congo; and possibly Tibet.

“This is the last year I think I’m going to live at that intensity,” she says. “There are younger women now. It’s time for them to take the reins. It’s not like I’m ever going to leave V-Day, but I’ve been doing this for 15 years, 12 hours a day straight.”

That might be difficult for a woman, who, as you might expect, finds it hard to leave anything back. Even while battling cancer, she kept working, fighting, loving.

“Her spirit was always so completely alive. She never let that break her,” says Olivia Oguma, an actress who was moonlighting as a waitress at a Middle Eastern restaurant that Ensler frequented while sick. “She may have been ill but she was still so there and present.”

These days, Oguma is one of six actresses focusing on the struggles of adolescent women across the globe in Ensler’s “Emotional Creature,” based on her 2010 book “I Am an Emotional Creature: The Secret Life of Girls Around the World.”

What to call the show, which was well-received by critics, isn’t easy. There are monologues and songs, text messages and dancing. “I’ve been calling it ‘a theatrical girl’s event,'” says Ensler. “It’s of the language of girls. That has created its own theatrical entity.”

There’s the tale of a young Chinese woman working in a Barbie factory, the story of a Bulgarian teen forced into prostitution and the lament of a Congolese girl forced into sexual slavery. And then there’s a song about celebrating short skirts.

“I’ve always had an aversion to the three-act structure. Life isn’t like that, you know,” Ensler says. “You have one act and you repeat it again. Then you have a second act and a third act and then you go back to the first act.”

How Ensler manages to channel the tumultuous feelings facing girls across the world is something of a mystery. While she travels extensively and speaks to everyone, she stresses that her monologues are fictional but based on reality, sidestepping the mess that monologist Mike Daisey faced when he admitted to making up conversations.

“There’s nothing I’m doing that’s pretending to be something other than fiction,” she says. “I know there are girls who work in Barbie factories. I did the research. I’m not making up reality. That girl, did I meet her? No. Do I know what goes on in her head? No.”

So how did it happen? “One day, she just started to talk to me,” says Ensler. “I think when I feel someone deeply, deeply, deeply then I understand how they talk. When I go far enough into someone, then I get it.”

Sade Namei, an Iranian-born actress who delivers a touching monologue about undergoing a forced nose job, says Ensler’s words ring true. “It’s me,” she says. “Eve has allowed me to just be myself and give my humor to the monologue.”

Spending time with Ensler has changed her actresses. Oguma says just being around the playwright makes them want to know more about the world. If they began as actresses, they are now theater activists.

“That’s what happens when you do one of her plays,” Oguma says.

And some of Ensler’s confidence and empowerment has also affected Namei. “I used to not wear short skirts. Not because I’m religious or anything but because I was insecure about my legs,” says the actress. “And then for some reason, I think subconsciously, this process has changed me.”

One day she pulled out a daring miniskirt and wore it.

“She was really happy,” Namei says.