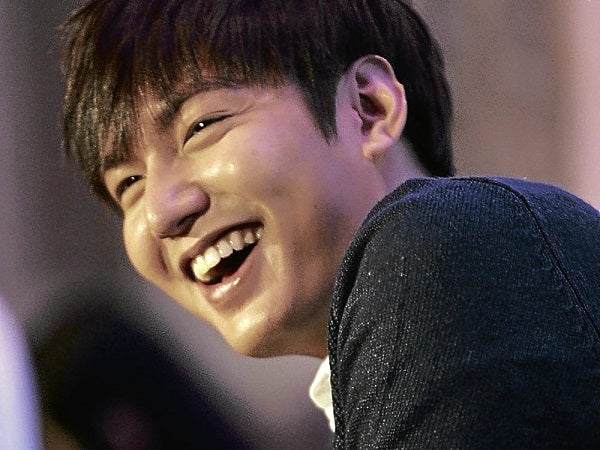 On his TV show “Boys Over Flowers,” which catapulted him to fame not only in South Korea but also in Asia, Lee Min Ho played the leader of bullies who lorded it over an exclusive high school.

He’s tall, good-looking, and spoiled rich—in one episode, to infuriate a “commoner” who was traveling on a tugboat, he used a cruise ship to try to overturn it with massive waves.

There’s a catch: this bully, this guy feared by all, has permed bangs.

They were nothing like Michael Jackson’s curls, which by the way, he must have had naturally. They were more like a poodle’s pouf, deliberately fashioned on Lee Min Ho’s forehead.

That he made such a character believably vicious, when he could have been ridiculed for looking like a toy dog speaks something of his acting chops. That he made female fans derive masochistic delight from his tyrannical antics speaks volumes about his charm.

In the end, the beastly character softened, and Lee Min Ho, the actor, became a certified Asian star.

In person, he is a striking presence: about 6-ft tall and very lean, he looks like he stepped straight out of the runway (although he did come straight from the runways of Naia). Wearing a black rolled-up cardigan over a white shirt and slim-fit dark denims, all from Bench, he showed no signs of fatigue after his four-hour flight from Seoul, when he was formally introduced as the brand’s newest endorser for its apparel and Fix hair care products at a press conference at Shangri-La Makati.

Sidelined from soccer—his first love—due to an injury, the 25-year-old Lee Min Ho first thought of becoming an actor when he was 19 and had the chance to audition for bit roles on TV.

“A year later, when I was deciding on a career path, I realized it was for me,” he said, through a Korean translator.

At 21, he was chosen to play Gu Jun Pyo, the lead male star in “Boys Over Flowers.” It aired in 19 countries, including the Philippines. He has since starred in three more TV shows: “Personal Taste,” “City Hunter,” and “Faith.”

His popularity is such that his endorsement deals extend beyond Korea, to China, Thailand, Vietnam, and even the US. Bench is his first project in the Philippines.

According to Bench, getting a Korean endorser, its latest after Dong Hae and Si Won of boy band Super Junior, is a way of acknowledging steady Filipino-Korean relations. For Lee Min Ho, it is a huge honor.

“Bench is playing a huge role in bridging Filipino and Korean culture,” he said. “I am also representing Korea as its ambassador so I feel I need to give back this honor by doing a good job.”

Korean pop culture is at its peak, especially with the global hit “Gangnam Style,” a song by Korean pop artist Psy. Before that—for years—Korean shows have been and continue to be TV staple. “Our dramas and songs must have a universal factor—things that we, as human beings, can relate to: love, romance, and family,” Lee Min Ho explained their popularity.

“As for Bench and myself, I think our connection is that we have a broad and global appeal—I feel I have that kind of appeal,” he explained laughing, almost self-deprecatingly.

“I would like to say thank you to all the fans who made it to the Bench event. Adobo ^^ Masarab!” he posted on Twitter, where he has close to a million followers, with his photo grinning happily with a serving of the Pinoy dish.

Notwithstanding the awkward English and misspelled Tagalog, his Filipino fans were appreciative: they retweeted the photo more than 7,000 times.

During his stay here, his name, in different hashtag variations, was part of Twitter’s trending topics in the Philippines for three days.

“I communicate with my fans on Twitter and Facebook,” Lee Min Ho said. “They message and mention me a lot—and unfortunately, I haven’t been able to reply to all. But because I’ve heard from Filipino fans, I feel pretty close to the Philippines and to them. That’s what I like about social media.

“Filipinos are warm and friendly—they are known worldwide for that,” he added. “I’ve heard a lot about the vacation spots here so I hope the fans would tell me more about them.”

He said that hearing from fans from other countries gives him confidence as an actor. “The job of an actor is not a stable one, it could have a very short life span,” he said. “But the fact I have their support helps me focus on what I need to do.”

He may be an active social media user, but he still treasures his privacy, especially if he could get away with being anonymous. He admitted that when he has spare time, he goes to the movies, choosing screening schedules that do not invite a crowd. “I’ve mastered which theater to go to and at what time. I usually bump into five or six people who recognize me—that is the ideal number.”

In terms of clothing, he prefers to call as little attention to himself, favoring “simple” and well-fitted clothes in dark hues (see sidebar interview), but which in fact, only sharply highlight his dapper physique as they did during interviews in the hotel.

He’s very conceptual when describing his sense of style, opting to respond with abstract qualities than with specific objects. On the most important fashion tip he has ever received, he said it was “finding your own style.”

On what type of clothing he prefers on women, he said: “It doesn’t matter what she’s wearing. It comes down to how she projects herself. Confidence is very sexy and attractive.”

As for his hair, which helped him become famous, it is now cropped short, with fringes casually resting over his eyebrows. “I’ve always been particular about it,” he explained, recounting a story about how he canceled a date with his friend because even after three washes, he couldn’t get the styling right.

“And now, it’s very convenient because I have a hair stylist who takes care of that,” he said with a grin.