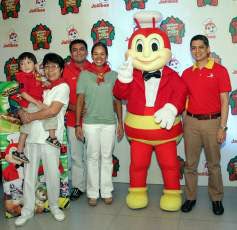 On its 18th year of bringing joy to thousands of kids, Jollibee’s Maaga ang Pasko continues to involve more families and make it part of their Christmas tradition. To date, over a hundred generous families from different parts of the country have enlisted themselves as Jolly Family Toy Scouts and pledged to share their gifts not just for less privileged kids but entire families.

Jolly Family Toy Scouts joined partner schools and companies during the kick-off events held in Metro Manila, Bacolod, General Santos, Tarlac City and Calamba, Laguna. Celebrity families, winners of the Jollibee Family Values Awards (JFVA), and Jollibee’s own Regional Business Units (RBUs), led the symbolic hanging of ornaments to encourage other families to be part of the advocacy that has brought smiles and early Christmas cheer to hundreds of thousands of underprivileged children.

recruiting Jolly Family Toy Scouts,” explained Jollibee VP for Marketing Albert Cuadrante. “For many years, Maaga ang Pasko has grown bigger and bigger with the help of our growing number of partner schools, companies and families. We believe that encouraging the whole family to be part of the campaign would make a wonderful addition to our partners so that the value of sharing would be deeply embedded in each member of the family. Our vision is to make the Maaga ang Pasko part of every family’s Christmas tradition.”

Leading by example are the Guzman (Tondo), Ramos (Bacolod), and Cartojano (General Santos) families, all of whom are recipients of the Jollibee Family Values Awards (JFVA). “It has always been our family tradition to celebrate Christmas with our beneficiary kids and their families in Payatas and Tondo,” shared the Guzman family. “This year, we plan to make our Christmas party more memorable with the prize we received from the JFVA.” Meanwhile, the Ramos family adds Maaga ang Pasko to their existing advocacies, which include donating life vests to communities near coastal areas. The Cartojano family continues to be models in their community as they pledged to collect more gifts for less fortunate kids on their second year as Jolly Family Toy Scouts.

Jollibee’s own regional business units and other employees also strengthened their bond this Christmas by working together to gather more books and toys for the campaign. The Jollibee regional units from Metro Manila, South Luzon, North Luzon, Visayas, and Mindanao all pledged to enjoin their own families and communities to be part of the cause by pledging one book or toy from each family member.

“We believe sharing is one of the best values we can teach our children,” expressed TV host Tricia Chiongbian-Concepcion and husband Guy. “Sharing not only means giving material gifts but also sharing ourselves with others.” Both Tricia and Guy, with their son Pablo, joined other Jolly Family Toy Scouts during the Metro Manila launch of Maaga ang Pasko.