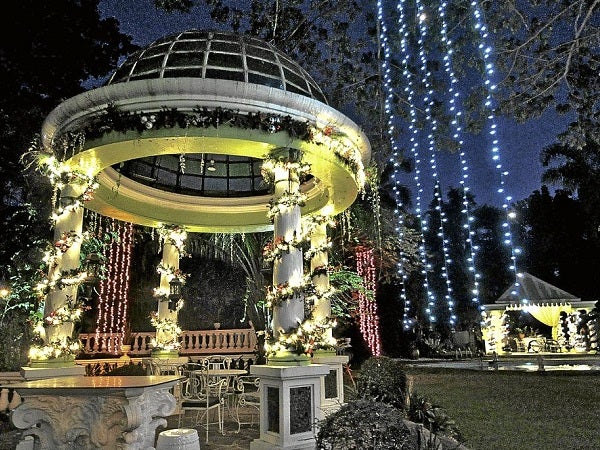 Anytime between now and New Year’s Day, businessman and beauty guru Ricky Reyes and his family, including 93-year-old wheelchair-bound mother Ada, are all set to make the big move from their huge two-story house in Valle Verde, Pasig, to a more modest condominium unit in nearby Greenhills.

Reyes and longtime partner Cris Aquino, and their two grade school-age daughters, have called the Valle Verde address home for nearly a decade now. (Their adult son, 35, is now married and is based in the US.) Featured many times in print and on TV, the mansion is known to a cross section of society.

In the meantime, Reyes and his four-person team, including an electrician, still found the time to dress up the house for the holidays. Instead of one huge Christmas tree that used to occupy the high-ceilinged informal living room, Reyes opted for nine smaller and thinner Christmas trees with varying heights.

Following a particular color scheme, each tree is made of faux pine leaves and spruced up with lights and tinsel. They come in such colors as green, red, blue, purple, orange, gold, silver, copper and pink, as only the artist in Reyes could conceive them.

“Imagine, we did everything ourselves for three days,” he says. “Almost every item, including those center pieces, is recycled from old stuff I keep in the company’s warehouse. Especially with the kids around, I didn’t want to do away with tradition just because we’re moving.”

Built on a 2,300-sq-m lot, the four-bedroom house comes with a huge master bedroom, swimming pool and sprawling garden where Reyes and Aquino have been hosting a series of annual Christmas parties, including one for media friends.

They have been planning to sell the house since early this year. Not a few close friends were surprised to learn about their decision, because they knew how the couple, especially Reyes, loved the house.

Building it was a “labor of love,” says Reyes, as he oversaw its design, including the addition of iconic elements such as the staircase and gazebo inspired by the classic musical “The Sound of Music,” one of his all-time favorite films.

“I already have a buyer, and she has given me P5 million in earnest money,” says Reyes, who declined to reveal the property’s total price tag. “I’m selling the house and everything in it, down to those huge chandeliers in the living room, lock, stock and barrel.”

The only things Reyes and his family are taking with them to their four-bedroom Greenhills flat are their personal effects, including a few artworks. The fully furnished high-rise unit is an old property Reyes has kept and maintained all these years.

Moving in won’t be a big adjustment for the kids, as the family often spends their weekends there. In fact, they’ve tried just about every big restaurant in the Greenhills area.

“It would be good if we could still stay here during the holidays, but we could move out anytime, even tomorrow. I don’t think the new owner would be interested in keeping a portrait of mine done in oil by Eladio Santos. That’s one thing I’m taking with me. What would she do with that?” Reyes says with a hearty chuckle.

Before tongues start wagging, Reyes points out that he’s selling the house not because he and Aquino are in the red. Nor is he suffering from any serious health problem.

For a self-made businessman who owns and manages a chain of beauty salons named after him, Reyes says that it’s easy for him to part with the house because he’s “unattached” to material things. And unlike some people, he can’t imagine himself living in one place for, say, 30 years.

“It’s not that I’ve gotten bored with this house,” he says. “Because I’m an artist and a homebody, I love to regularly rearrange things at home. Whenever I find myself unable to make changes anymore, short of demolishing the structure, that’s the time I start thinking of selling our house and moving somewhere else.”

Rearranging includes making minor changes such as knocking down walls in the former music room, and replacing them with glass panels. The room, which used to feature a home theater system, now functions as an informal dining area where the couple hosts lunch and dinner for small groups of friends.

The house’s main dining area, located on the other side of the spacious informal living room, features a huge table that can sit up to 22 people.

Over the years, Reyes has also had the exteriors repainted several times in such cool colors as baby pink, mint green and light yellow. These days, the structure sports a gleaming coat of white and celery green.

Selling the house is also Reyes’ way of making the remainder of his earthly journey light. Waxing philosophical, Reyes says he has come to realize that the world and all its earthly delights are meant for young people.

A person’s younger years are usually spent saving and acquiring worldly possessions, he adds. But once you enter your 50s, that’s the time you start liquidating and leading a simpler life.

“When you reach a certain age, you start to let go of your material possessions. Well, I’m way past 25. I want to be liquid. I don’t want to be the cause of trouble among my loved ones should I die,” says Reyes, whose age, like his net worth, is a well-kept secret.

Reyes has seen one too many cautionary tales of wealthy people dying alone and miserable, and leaving behind assets that their heirs only end up fighting over. Drawing a will is no guarantee that things would go smoothly.

Even with the contested assets frozen by a court order, the family squabble soon degenerates into a public scandal. Reyes would rather liquidate most of his assets than let that happen, so his heirs could easily divide the money among themselves.

For a person who has faced death a couple of times, Reyes says he’s not being cynical. He’s just being practical, “since all of us are going there.”

During a flight from Zamboanga, for instance, Reyes and his fellow passengers had the scare of their lives when they saw thick smoke coming out of the cockpit.

The smoke steadily rose and was already up to the seated passengers’ waists when the pilot was able to land the plane safely in Manila.

On another flight, this time to Japan, Reyes and Aquino felt like two kids in a simulated amusement park ride. Only this time, the ride and the danger it posed were for real, as their plane was caught in nasty air turbulence that sent trays of food as well as hapless stewardesses flying all over the place.

“I could have sworn that the plane nose-dived for several minutes before finally stabilizing,” he says.

Reyes was also onboard this strange flight, also bound for Japan, that safely landed on the ground, but stopped several kilometers away from the terminal building. Passengers were cooped up inside the plane for quite some time wondering, while fire trucks and police cars were stationed outside. When Reyes and other passengers were finally able to deplane, they got the shock of their lives.

“Imagine, all the time we were there, there was a bomb somewhere inside the plane,” Reyes says, laughing. “I guess, to keep us from panicking, we were never told about the real situation. We only learned about it when we were already inside the terminal building.”

After having survived such close brushes with death, Reyes’ Christian faith, he says, has been strengthened, and his relationship with the Lord became more personal.

“We were on a plane full of people, but everyone was quiet,” he says. “During such instances, you don’t think about anything, not even your money or your loved ones. Nothing! It’s now between you and Him.”

Reyes also never tires of telling the story of how he beat even the late Princess Diana, or at least those who oversaw her final resting place, by having an island mausoleum surrounded by water and linked by a concrete foot bridge built for himself sometime in the late ’90s in one of Metro Manila’s upscale memorial parks.

“My siblings were all aghast,” says Reyes. “They found it morbid. Again, I’m just being practical. I want to take charge while I still can and see for myself my final resting place.”

These days, Reyes makes it a point to attend early morning Mass at Christ the King in nearby Greenmeadows, and, one time, he noticed something which made him think. Almost everyone in church was already a senior citizen.

“I hardly see young people. Almost everyone has gray hair. I guess when you reach a certain age, people begin saying [to God], here I am, and I’m all yours. Even me, at my age, I’ve already given myself to God. And I’m only past 25.”

He has no plans of investing the proceeds from the sale of his house by opening up new beauty salons. Nor is he interested in lending his name to franchisees. Opening new branches, he says, will depend greatly on the location.

Reyes, who runs a foundation for children afflicted with cancer through Munting Paraiso and Child Haus, wants to expand in a different way by including the elderly in his advocacies. He plans to buy property in the San Mateo-Antipolo area, and turns it into a resort-slash-retirement club for senior citizens.

He already has a name for it: the Silver Lining. Once finished, the resort will accept paying patrons who can indulge themselves in Reyes’ idea of holistic living.

Apart from having a doctor and caregivers, the resort will have a church, beauty parlor and grooming center, spa, restaurant and a huge venue for, what else, bingo socials. Guests will be encouraged to book rooms as groups.

“When you start to get older, even if your children say that they still love you, there will come a time when you won’t be able to fully understand each other anymore because of differences in “wavelengths,” says Reyes. That’s why older people get along well with fellow oldies because they still understand each other, talk about the same events and share similar concerns.

“How many rich, old matrons are left with no one to keep them company but maids in their huge mansions?” Reyes asks. “Their children, some of whom are abroad, visit them once in a while and that’s it.”

These old people become depressed, hardheaded, sensitive and even selfish. They start feeling like excess baggage, useless and unwanted. But if you give them the chance to bond with people their age, they brighten up. At least you give them something to look forward to and live for in the short time that they still have, he adds.

As for Reyes, he has no illusions of people remembering his accomplishments, in business or civic work, long after he’s gone.

“Please,” Reyes says, his eyebrows raised in mock irritation. “When people ask me how I’d like to be remembered, I tell them I don’t even think about it because no one would. Once you’re past your time, that’s it.”