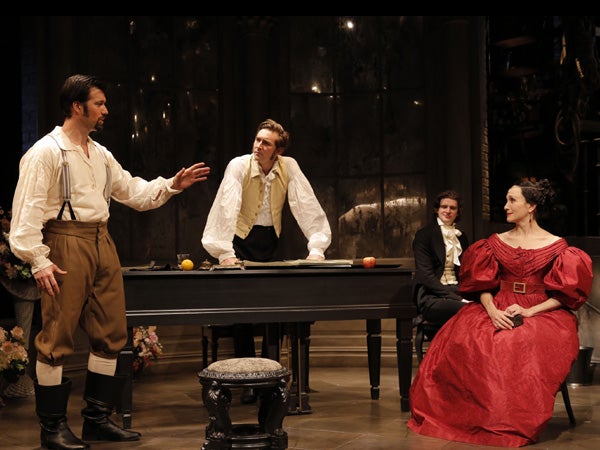 NEW YORK — Jealous sniping has always been in fashion, whatever the century.

The backstage passions and vanities of a quartet of popular opera singers, plus a revered diva and a couple of renowned composers illuminate the New York City premiere of “Golden Age,” Terrence McNally’s play about an important evening in the life of 19th-century Italian opera composer Vincenzo Bellini.

“Golden Age” is set on Jan. 24, 1835, in the backstage area beneath the Theatre Italien opera house in Paris, at the premiere of Bellini’s new opera, “I Puritani.” It was his last work.

With a bit of poetic and factual license, McNally gives his characters a variety of informed discussions, sprinkled with insider opera jokes, covering musical techniques, snipes at rival performers, and romantic and professional jealousies and betrayals.

He clever manages to insert the ghost of Callas, even though she wasn’t born until nine decades later, through the formidable personality of outspoken, formidable mezzo-soprano Maria Malibran, (Bebe Neuwirth, grandly imperious and eloquent.)

Director Walter Bobbie gets around the fact that none of his cast can sing operatically by sending them up a sweeping staircase to the opera house wings, where they disappear offstage, and their singing is voiced by professional opera recordings (including Callas at least once, for Malibran.)

Lee Pace holds the stage with aplomb as Bellini, portraying the youthful, already-successful, but dying Sicilian composer as alternately confident and nerve-wracked. Bellini nervously paces about, complaining about critics, second-guessing his work, reassuring his performers between acts and falling into reveries as he conducts along with the upstairs opera.

Luigi Lablache, the bass, is portrayed with staunch spirit by Ethan Phillips, and Eddie Kaye Thomas is brightly confident as tenor Giovanni Battista Rubini. Lorenzo Pisoni is quite dashing and comical as egotistical, lady-killer baritone Antonio Tamburini. His excessive pants-stuffing leads Bellini to proclaim jestingly, “This is the theatre. We wear our hearts on our sleeves and our cucumbers in our pants!”

Dierdre Friel gives a spirited air to temperamental soprano Giulia Grisi. Neuwirth drily delivers one of the play’s funniest lines, about a Grisi tantrum, “Rivalry is strong medicine.” Will Rogers is humble and protective as Bellini’s lover, Florimo, movingly recalling an evening of carousing with a then-healthy Vincent that gives a glimpse of Bellini’s creative process.

In “Golden Age,” McNally provides a fascinating, authentic-sounding glimpse of the passions and piques of top-notch performers as they struggle to get themselves — and one another — through the pressure-cooker nerves of a major opening-night performance.