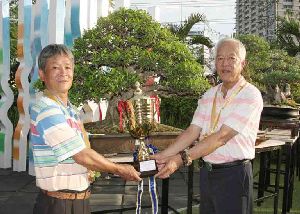 IT’S MAYHEM and pollution along North Edsa, but at the Skytop of SM North Mall, the scene was placid, with collections of elegant bonsai prepared by the Philippine Bonsai Society Inc. The place turned out to be a botanical garden amid the stalls.

The Society’s president, landscape artist and art collector Bobby Gopiao, said the spectacle of dwarfed trees was only half of the entries, since the entries come from Ilocos to Mindanao. Aside from the Philippine Bonsai Society being the biggest specialized group in the country, it is acknowledged by Bonsai Club International and Asian Friendship Federation, of which Gopiao is president. In foreign competitions, the Philippines has always consistently been top-ranking.

“We are lucky. We have good relations with National Bonsai Association of Taiwan, which has been helping us with technique and all aspects of the bonsai,” he said. The Philippines is rich in material for bonsai—kamuning, podocorpus, tamarind, yellow doggy and blue bells. The bantigue (Pemphis acidula) has became so popular that in the past, winners favored it as an entry. “The bantigue is a coastal tree. The trunk is very old. The Taiwanese say it has the qualities of juniper and pine because of its rugged bark. The bantigue has the same curvature as the juniper. The leaves are small. It looks ancient. It can be cultivated in 10 years instead of 20. The Philippines is acknowledged as bantigue king,” said Gopiao.

“We developed the technique in growing and training. Since it grows beside the sea, it needs saltwater. Our Pangasinan affiliate discovered the use of bagoong to fertilize the bantigue.”

This year, awarding of bonsai is divided into two categories, bantigue and non-bantigue, to encourage more entries. The association has adopted the Taiwanese system, wherein for every 15 trees there is a gold prize, two silvers and three bronzes. “About 40 percent wins. Everybody is happy. After all, this is a hobby,” said Gopiao. 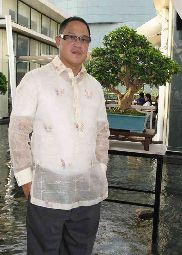 Two Taiwanese bonsai masters, Chew Yu Xian and Kuo An Li, were flown in to judge the competition. They were impressed at how the Filipinos have evolved. Li said the Philippines still gets its bonsai from the wilderness, hence the trees are natural, unlike in Japan and Taiwan, where they are scientifically propagated.

Xian observed that Filipinos are fine-tuning their aesthetics. He explained that the tree and the pot create one harmonious unit, where shape, color and texture flatter each other. In the past, they merely cultivated a dwarf tree in a pot without much thought. Today, they understand the importance of the pot size, shape and depth in relation to the tree. 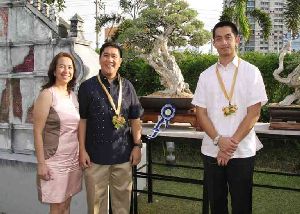 On Pablo Dichitan’s grand prize-winning bantigue, the Taiwanese judges commented it has matched the bonsai ideal of artistically reproducing a natural bantigue in miniature form, the aged trunks making it a living antique. The paleness of the shari (deadwood within the tree) emphasizes the age of the trunk. They noted that the branches are proportional to the trunk.

On the grand prize in the non-bantigue category by David and Belinda Lim, the judges were impressed with its sculptural quality and three-dimensional depth. Both grand prize-winning trees had trunks that tapered gracefully from base to tip. Their branches are uniformly spaced so that they look beautiful from any angle.

The society is also on a crusade. The Department of Environment and Natural Resources’ ban on cutting down trees posed a threat to hobbyists. Gopiao spoke with Ilocos Norte Governor Imee Marcos to create awareness of bonsai and to replant bantigue trees. 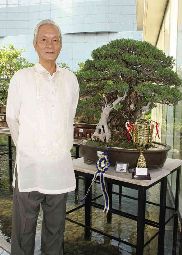 The National Bonsai Association of Taiwan had developed a curriculum for Mariano Marcos University. “Bonsai could be a means of livelihood. If you know how to cultivate it, you could earn,” said Gopiao. 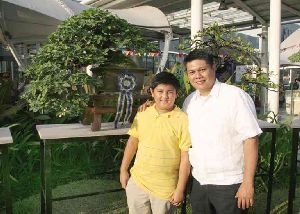 There were talks with the mayor of Pagudpud to replant bantigue along the coast. “Next year we will replant seedlings. We’ve been accused of depleting our natural resources. Now we have to give back.”