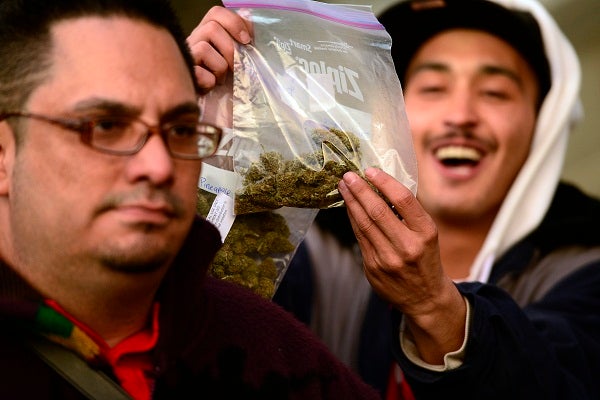 Gerald Thompson holds up a bag of marijuana on the steps of the State Capitol in Denver on Monday, Dec. 10, 2012. Marijuana for recreational use became legal in Colorado Monday, when the governor took a purposely low-key procedural step of declaring the voter-approved change part of the state constitution. AP/The Denver Post, AAron Ontiveroz

DENVER — Colorado gave a lonely reception to marijuana when it became the second U.S. state to legalize the drug. Just as state officials planned.

Gov. John Hickenlooper on Monday quietly removed the final barrier to legalization by declaring that an amendment passed by voters in November was officially part of the state constitution. He announced the move on Twitter and email after the fact. In response, a handful of marijuana activists celebrated by toking up on the Capitol steps, but there were no crowds and little fanfare.

It was a different scene in Washington state, which last week became the first state to legalize marijuana. There, activists counted down to legalization outside Seattle landmarks such as the Space Needle. Colorado officials wanted no such revelry.

Hickenlooper, a Democrat who opposed the marijuana measure, said he purposely sought a low-key enactment.

Colorado law gave him until Jan. 5 to declare marijuana legal. He told reporters he saw no reason to wait and didn’t see any point in letting marijuana become legal without his proclamation.

“I could have made a bigger deal out of it, you know, tried to make a hoopla out of it,” Hickenlooper told reporters after the marijuana declaration.

“But if we are concerned about young people thinking that this … is really in some way a tacit endorsement, that’s it’s OK to smoke pot — we’re trying to mitigate that as much as possible,” he said.

About two dozen marijuana activists gathered outside Hickenlooper’s office on the Capitol steps to pass around joints and bongs after the announcement. Public consumption in both states remains illegal, but no police officers were in sight of the small celebration in Denver.

When Colorado’s marijuana measure passed last month with 55 percent of the vote, Hickenlooper cautioned pot smokers not to get too excited because the drug remains illegal under federal law. Colorado and Washington state officials both reached out to federal authorities to see if they planned to sue to block the state pot measures. There’s been no signal, with federal authorities simply repeating that the Controlled Substances Act remains intact.

Hickenlooper said there are still many questions to be answered about how federal authorities plan to respond to state marijuana legalization. Colorado’s measure specifically directs lawmakers to regulate commercial sales of marijuana, something federal authorities have repeatedly said they won’t allow.

The governor said he’s not frustrated by the slow federal response.

“They’re going as fast as they can,” Hickenlooper said. “There’s no black and white, right and wrong answer here.”

Colorado’s constitution now allows adults over 21 to possess up to an ounce of marijuana, and six plants. Hickenlooper has set up a task force of lawmakers, law enforcement, marijuana activists and agriculture officials to suggest how the drug should be regulated. The group has a February deadline for suggesting pot rules, which must be approved by the state Legislature.