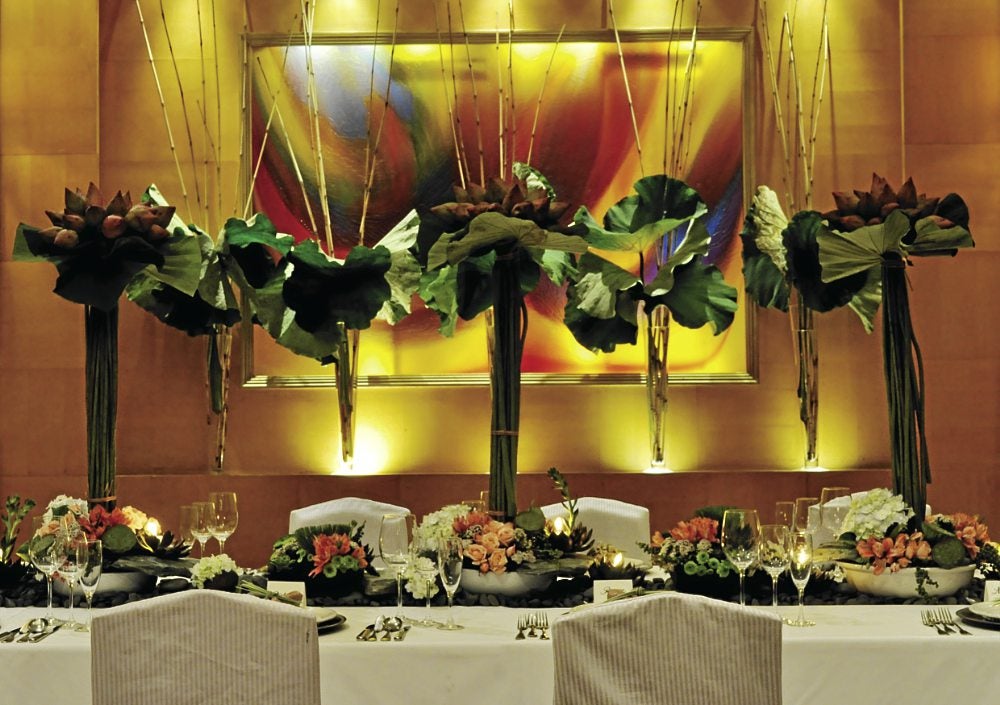 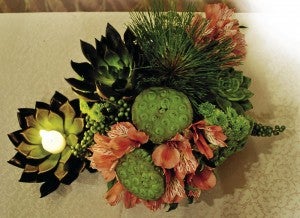 Leading floral arranger and event stylist Zenas Pineda showed Inquirer Lifestyle how she could use native lotus leaves, flowers and buds to create an elegant setting. Combined with black stones, they yield an innovatively chic arrangement.

This is to prove that while the West continues to influence our choice of flowers and floral arrangements for weddings and other special occasions, Oriental-inspired designs combined with Western aesthetics are becoming a favorite among bridal couples and party hosts.

Pineda, the featured artist in an ongoing series organized by leading wedding planner Rita Neri, feels fulfilled doing Filipino-inspired designs that fuse some of the best elements from East and West.

“In a way, I’m also advocating a more eco-friendly approach to floral arrangements by getting materials with less carbon footprint,” she added.

That means using blooms and other components readily available locally—and avoiding non-biodegradable materials such as Styrofoam. “It’s okay if the client insists on using imported flowers,” said Pineda, a former product designer of Design Center Philippines before joining Rustan’s as visual merchandiser and floral arranger, “but as much as possible, I try to combine my work with locally sourced blooms.”

For our shoot, Pineda originally had a garden reception in mind. Since the weather was bad, she moved the shoot indoors to a Shangri-La Makati function room, from the garden.

Hollow brown pods were filled with small flowers in between each bowl, the base of the bowls themselves were adorned with multiple-size flat slates and a mélange of blooms, including Bignay berries, bushy papyrus leaves, rice flowers and dark, aloe vera-like succulent aptly called negra.

The mantel was a serendipitous addition that wasn’t in her original plan. She saw no need to use several pedestals she brought to the shoot, as the function room’s mantel was enough to help her achieve her concept.

“The look is very Zen, but with modern touches,” she said. “I was able to do a rather tall arrangement because it worked on the presidential table. Otherwise, I usually go for low arrangements for round tables so as not to impede guests from seeing or talking with each other.”

Although they thrive in certain watery areas in the provinces, particularly in Quezon, lotus leaves and buds don’t usually end up on top of a Filipino floral arranger’s list. Lotus leaves are associated more with such Buddhist countries as Thailand and Vietnam.

“They also grow abundantly in the Philippines, which has the same tropical weather as Thailand,” said Pineda. “I don’t see why we can’t use them here.”

As for the acceptability of using black river stones in lieu of a table runner, Pineda assured us that they had been washed several times. 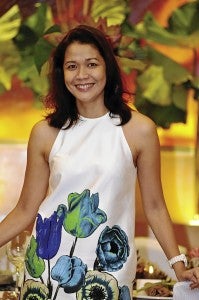 “It’s perfectly acceptable and sanitary to use black river stones for the presidential table as long as you confine them to the middle,” she assured. “It also depends on the type of meal to be served. You can put a few more decorative elements on the table, including black river stones, for plated meals that don’t occupy too much space. Anyway, VIPs seated at the presidential table are usually served plated meals.”

To turn the look from Zen to Filipino, Pineda could add a few elements such as seashells and votive candles in lieu of certain items in the existing arrangement.

Pineda, a trained interior designer from the University of the Philippines, left Rustan’s five years ago to do full-time event styling. She’s also done debuts with themes ranging from “Moulin Rouge” to Japanese-inspired events sans flowers.

“For the ‘Moulin Rouge’-inspired debut, I used plenty of cascading feathers and colorful beads,” she said. “I even commissioned a supplier to do a windmill. For the Japanese-theme party, I opted for origami pieces in bright, happy colors such as orange, red and yellow. The debutante didn’t like flowers and the color pink.”

As for today’s brides, she said, not a few have become quite demanding. They come to her with a clear idea of what they want their wedding receptions to look like. Or, sometimes, it’s the artistically inclined and opinionated groom who calls the shots.

“Most of them have good ideas, and I welcome them,” she said. “After all, I’m here to merely advise, fine-tune and execute their ideas. Whether they have clear ideas or not, I insist on seeing the couple first and do an informal interview to get to know who they are and what they go for. At the end of the day, I want their ideas, not mine, to dictate the wedding’s look and feel.”