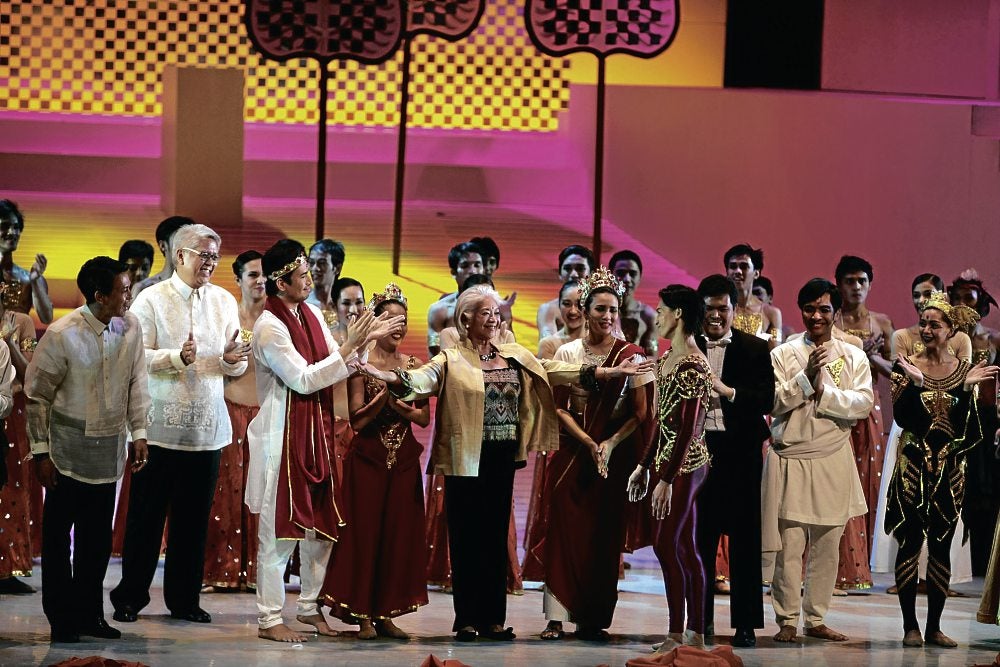 COMPOSER Ryan Cayabyab and Alice Reyes, founding artistic director of Ballet Philippines and creator-choreographer of “Rama, Hari,” being feted by the cast on opening night

A triumphant return for ‘Rama, Hari’

The concept sprung from Alice Reyes, then artistic director of the ballet company; the music score by a twentysomething up-and-making-it composer, Ryan Cayabyab. Add to that, a casting coup of pop singers who now belong to the unnamed hall of pop fame: Basil Valdez, Leo Valdez and Kuh Ledesma.

“Rama, Hari” was restaged twice, in 1983 and 1990, each with less impact than the last. For whatever reason there was, even if the singing and dancing output was still at par as the original staging, the novelty of a song-and-dance theater piece may have lost its steam then to the changing economic landscape of legitimate entertainment.

Based on the “Ramayana” epic, the two-act dance musical liberally borrows from many Asian influences as there are versions of the epic. To date, there are about 300 of them all over Asia, the Philippines included. It is from Indian literature, however that Reyes and Lumbera derived main inspiration.

Bernal’s set echoed a Mughal garden, geometric, with a raised hillock at the center, which in cosmological descriptions represents the mountain at the center of the universe. His color palette for costumes “carried the colors of curry spices and the feel of turquoise,” as Reyes described it.

On the proscenium was a stretch of black and white checkered fabric, representing a Kain Poleng, a Balinese fabric used to wrap statuary and trees to ward off evil. “Rama, Hari,” after all, concerns itself with the universal struggle of good vs. evil. All throughout the musical, dancers bearing the tree of life wafted in and out.

When word floated around that there would yet be a fourth restaging  of “Rama Hari” this year, one had a bit of trepidation at the news, especially as it would have followed a tepid attempt at restaging another pop ballet in the company’s repertoire, “Tales of the Manuvu,” a season before.

Perhaps there were lessons learned in that attempt, and possibly to avoid similar pitfalls, Reyes flew in from San Francisco where she has lived for many years after relinquishing her 20-year post with the ballet company.

The result: For two weekends and 11 shows, the Cultural Center of the Philippines’ (CCP) main theater was packed to the rafters, and with each curtain call, a long standing ovation, followed by a lengthy meet-and-greet cast and audience soiree at the theater lobby.

After watching both casts perform, we were clear about the reason for the elation: All elements—song, dance and music—were at an even high keel, polished, energetic and totally motivated, despite the obvious popular edge the lead singers had over the lead dancers.

The original sets and costumes by Bernal were restored or recreated, pulling together the totality of Reyes’ vision as choreographer and director. Cayabyab’s lush score matched by Lumbera’s elegant libretto in Filipino, as well as Tinio’s poetic translation into English flashed in supertitles, left the audience with more than what they had expected.

Much can be said about how Reyes and Cayabyab had taken educated liberties at picking and choosing from the many versions of the Ramayana, moulding them into a cohesive seamless whole. “My instinct, nevertheless, was to interpret it in the rock-opera ballet medium, with the idea of translating it into very human and contemporary terms,” said Reyes in her notes.

Cayabyab’s “signature” Bacharach and Broadway influences, marking that particular period of his prolific music career, were obvious, but fused with an occasional Indian melodic line, the Filipino kundiman, Asian percussion, soul rock, and even monkey sounds which were entertainingly produced by the University of the Philippines Concert Chorus in this restaging.

Arguably, the anthem of “Rama, Hari” is the hauntingly beautiful aria of Sita, “Magbalik Ka Na, Mahal,” with its progressions and challenging key modulations. From the original staging to this present restaging, only Jacqui Magno in 1983 managed to hit all the notes successfully in the tricky coda.

While this sort of shifting voice placements can be a bane to the songstress, it only underscores the wonderfully rich complexity of Cayabyab’s musicality. While Christian Bautista as Rama, and Karylle and Kalila Aguilos alternating as Sita, performed competently as expected, it was, to my mind, the cool vocals of OJ Mariano as Rama and the full-bodied interpretation of Christian Rey Marbella as Ravana that were a revelation.

The lead dancers exhibited the characterizations of the roles in their own right. Jean Marc Cordero’s slight and fair physique was princely, light on his feet, controlled in his emotions; while Richardson Yadao was earthy, with a warrior-like countenance, and heavier and more defined musculature.

Carissa Adea’s Sita was sultry and spontaneous, her upper body movements as she opened from the chest were like expansive caresses. Katherine Trofeo, on the other hand, was elegant and royal, yet her well-defined musicality lent a certain excitement and an edgy quality to her dancing. In this role, Trofeo shone particularly in her precise footwork.

Two delightful discoveries were Earl John Arisola and Luis Cabrera Jr., alternating in the role of Lakshmana, brother to Rama who accompanies him and Sita in exile. The ease with which both dancers executed difficult combinations belied a strong, well-grounded technique. Multiple pirouettes ending in clean fifths, light but soaring grande jettes were just two examples that pointed to that confidence in technique.

This fact can very well be pointed out, too, in  the corps who, as a corps should, breathed as one and moved uniformly, even in the high powered, wildly invigorating monkey dances.

To those who had faithfully followed Reyes’ work in those 20 years, the trademark of her choreographic style lay in the distinct modern technique of Martha Graham, which was the new dance genre Reyes introduced when she returned from the United States after finishing training under a Hanya Holm scholarship at the Colorado College, and earning a Master of Arts in Dance from the scholarship program at Sarah Lawrence College.

Missing in the dancers’ movements were the characteristic contractions, releases and spirals associated with the modern technique, which were ever present in the premiere of “Rama, Hari” 32 years ago. Yet, the absence of those signatures did not detract from the eloquence of the choreography.

In place of the modern technique was some sort of “new moderne,” so to speak, that lived up to the energetic levels of present-day dance styles. Indeed, given the prescribed schedule to rehearse the whole work, sacrificing the modern technique and giving way to the heftier, more demanding kind of dancing dancers are trained to do today, unwittingly updated the choreographic look.

The successful revival of a piece like “Rama, Hari” was a much-needed shot in the arm for the Filipino performing arts amidst the influx of foreign acts. The audiences at the CCP did not dwindle despite two foreign acts that were on the same weekend. The lengthy standing ovations, hopefully, will not stop here.